Home » Angry campaigners ‘not prepared to roll over’ 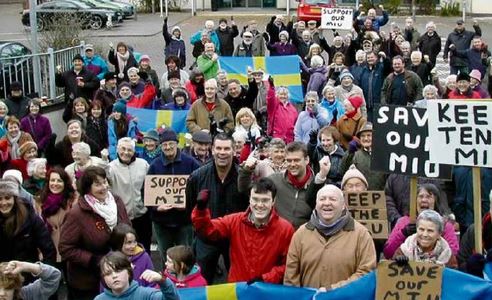 THE CLOSURE of Tenby’s Minor Injuries Unit has not stopped campaigners, who say the fight to keep it open will continue.

At a meeting last Friday, local AMs, county, town and community councillors and South East Pembrokeshire Community Health Network representatives confirmed they were not prepared to roll over.

“Although the Hywel Dda Health Board has stated that the MIU is to close, we’re not prepared to just roll over and accept their decision,” Tenby town councillor and secretary of the SEPCHN, Cllr Caroline Thomas, commented after the meeting.

She continued: “We feel that the case for maintaining the MIU in Tenby for the benefit of the whole of South East Pembrokeshire and the thousands of visitors who come to the area annually is as strong now as it always has been and we will continue to press that case.”

Chair of the Health Board, Chris Martin was invited to attend the event, but he declined leaving those who attended disappointed. Assembly members Angela Burns and William Powell, along with County Councillors, Mike Evans, Michael Williams, Phil Baker, Tony Brinsden, Jon Preston, Jacob Williams, Phil Kidney and SEPCHN chairman Mansel Thomas were all present at the meeting.

Before the meeting, Mr Martin had informed the clerk to Tenby Town Council, Andrew Davies, that the Health Board would not change their plans for the closure of the MIU, although he had stressed that no date had yet been agreed.

He had, however, agreed to meet with a small group of local county councillors to explain how the services currently provided at the Tenby MIU would be re-provided through local GP practices and ‘third party’ providers.

Members were grateful for the opportunity to meet with Mr Martin but local GP, Dr Iwan Griffiths, senior partner at the Tenby practice, expressed doubts that Mr Martin would be able to outline future provision, as Tenby Surgery had only been contacted once by the Health Board since June.

He said: “We, and I believe our colleagues in Saundersfoot, are still of the same opinion as 12 months ago, and that is that the current level of Emergency Nurse Practitioner-led service provided at Tenby MIU cannot be replicated by the GPs without an adverse effect on our role as primary care providers.”

Dr Griffiths added that promises made by Mrs Sue Lewis, the Health Board’s county director for Pembrokeshire, had not been kept. At a similar meeting with the group in June it was decided that they would look into models of provision in other areas with similarly high influxes of tourists.

He added: “If you keep reducing the services, and the times that these services are available, then ultimately you are going to reach a situation where the number of people presenting at the MIU is statistically so low as to indicate that it is not needed,” he ventured, adding that this seemed to fly in the face of the ethos of bringing care closer to the community.

Members at the meeting also felt that the Health Board had still not taken account of the poor transport links to Haverfordwest and Carmarthen, the large elderly population or the number of visitors.

Many members expressed their shock at the apparent lack of communication between the Health Board and the GPs over the last couple of months and Cllr Michael Williams even suggested that a vote of no confidence be called in the management of the Health Board.

Assembly member Mrs Burns agreed that there was certainly a case for lack of confidence in the board’s consultation and communication procedure on such an important issue, but felt that a lot more evidence would be needed to support such a letter.

Questions were also asked of the role of the Community Health Council in the matter, with East Williamston County Cllr Jacob Williams fearing that they had ‘capitulated’.

He said: “The CHC seem to have accepted the Health Board telling them that the services are going to be replicated by the GPs and other providers, but we’re now hearing from the GPs that no such agreement is in place. In fact, we’re hearing that the Health Board have not discussed the matter further with the GPs since June.”

Regional AM Mr Powell, who is also chair of the Assembly’s petitions committee, confirmed that Tenby Town Council’s petition calling for the Health Board to reverse their decision was still ‘live’ and was due to be considered again on November 11.

He also highlighted the fact Llandudno would be getting a £1.9 million investment to enhance their MIU facilities and said that the case for MIU provision in south east Pembrokeshire was no different.

The meeting resolved to keep the pressure on the Health Board to reverse their decision both through the Welsh Assembly and at local level.