Home » Fears over the future of our Town Centres 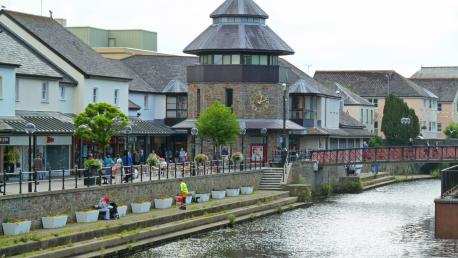 The controversy and debate over town centre regeneration has been re-ignited by Michael Hughes, proprietor of soon to be closed Haverfordwest outlet, ‘Tom Hughes’, who criticised the local County Council for failing to support local businesses in Haverfordwest Town Centre. When speaking to Mr Hughes, he explained how local businesses are struggling,

“There is a lack of planning and vision for Haverfordwest (by Pembrokeshire County Council). Little has been done to help regenerate the town centre. Nice streets and flowers aren’t going to bring people to Haverfordwest. Tourists will not simply come just for Marks and Spencer, Next and Debenhams. They come (to towns like Haverfordwest) for different shops.”

According to Mr Hughes, the retail trade journal ‘Draper’, has claimed there is actually a rise in high street shopping. He also made reference to the rates, which he sees as very high; indeed, he believes they are more expensive per square metre than they are in Carmarthen and he criticised the rating policy set by The Welsh Assembly, complaining that the threshold for rate relief is far too low.

The Herald spoke with a number of shops in Haverfordwest Town centre with recurring themes of complaint about parking facilities in the town, the cost of rates and the closure of Ocky Whites and its effect on trade.

Indeed, only this week comes the announcement that J and G Bland (Motors) Limited, are to close their doors on September 6th. Speaking with another local paper, the owner, Alan Bland, cited high overheads, especially the rates, as the reason for closure. This demise of yet another established Haverfordwest company, one that has been trading in the town for over 130 years, having been established in 1875, will come as a further blow to those that wish to see more independant traders within the Town. The loss of this family business also sees the loss of another twenty jobs in the Town centre.

“I will not run my town down or blame others for its plight but I do recognise the difficulties it is facing. My (Town) Council recognises the plight of our town centre but it also recognises that this is mainly due to the new shopping habits of people.”

She went on to say,

“We have great difficulty in understanding why the County Council wishes to develop a whole line of new shops by Bridge Street where the (current) businesses are struggling under high rates and rents. We consider it complete folly”.

Councillor David Howlett, leader of the Conservative Group on the County Council, commented upon the problem of perceived high rates in Haverfordwest.

“Business rates are the second largest expense (for a business) after wages, and this is set by the Welsh Government. The Welsh (Labour) Government could and should do more with that.”

He continued by explaining that a hardship fund is available to councils but that his worry is that, if a council started down that route, it might be difficult to know where to stop. He also pointed out that the Conservative Party have an Assembly policy for high street regeneration which, amongst other things, aims to tackle the problems with issues surrounding parking and rates, and would use Town Centre Managers to bring cohesion to the running of these centres. He finished by saying that,

“No one element will work by itself. It has to be a collaboration of local councils and the policies of Welsh Assembly Government and UK Government”.

“Small businesses play such an important role in Pembrokeshire and by regenerating our local high streets, we can take a significant step forward in nurturing growth in our local economy, creating jobs and making Wales a more prosperous nation. The Welsh Government needs to make our high streets more accessible and more attractive, as well as tackling high vacancy rates before our high streets disappear altogether”

Councillor Paul Miller, leader of the Labour Group, takes a very different view when searching for a solution to the problem. As he explained,

He went on to point out that, as he sees it, in the UK there are only a handful of ‘destination’  retail outlets, the likes of John Lewis and Marks and Spencer, for example, and that in a well planned venture such stores are used as ‘anchor stores’, generating, as he says, “footfall which can support and sustain neighbouring local retailers”.

He went on to lay out his, and Labour’s, vision for Haverfordwest.

“A Labour Council would engage directly with the major retailers still to develop a footprint in Pembrokeshire. We’d get from them just what it is they want- parking, floor area and adjacent facilities – and we’d produce one single master plan for Haverfordwest Town Centre. With pre-lets in place with retailers, we’d acquire the required real estate and provide the up-front capital funds to get construction underway”.

Asked whether he was concerned about the Welsh Labour Government’s business rate setting, he responded by claiming that business rates were a ‘smoke screen that the Council and its allies were using to cover up their failings’.

However, Councillor David Pugh, Cabinet Member for the Economy, poured scorn on Mr Miller’s viewpoint pointing out that Withybush Retail Park is privately owned and thus can allow any retailer to trade from its property as it so wishes; inferring that Labour’s plans would be impossible to impose. As well as this, he cited the cutbacks the County Council faces and doubted the electorate would support the use of Council funds in this way. On the subject of seemingly high rents, he explained that the County Council had no influence on rent set by private landlords. He also said that the business rates are set by the Welsh Assembly Government. He made reference to the business rate review document, published by Professor Brian Morgan in 2012, saying ‘it was a good report that called for the need for adjustment to business rates’, but stated that,

“Unfortunately the (Welsh) Assembly has decided to postpone this review until 2017”.

Councillor Pugh made it clear that he felt there should be an adjustment to the rates but that the Welsh Assembly Government had decided not to make that adjustment.

When asked whether his Independent Group may suffer from having no political voice within the Assembly, lacking, it would appear, a party manifesto, (as in past election literature the Independent Group has claimed to be ‘above’ party politics), Councillor Pugh simply stated that his Group had influence as a ‘political party’ and spoke often with the (Welsh) Assembly. He finished by saying that the regeneration of Pembrokeshire’s town centres was ‘at the top of the list’ and that the County Council would “engage with all aspects of Town to work in partnership to see what we can do”.

Finally, The Herald spoke exclusively with Preseli Pembrokeshire MP, Stephen Crabb, who offered an alternative vision of how Haverfordwest, or indeed any town centre, could face this uncertain future.

“It is clear that every town centre, up and down the country, faces challenges. Somehow our town centres need to be developed and managed in a way that responds to those trends. In some towns the shopping area could be smaller with perhaps more residential and cultural facilities, for example, galleries and restaurants, replacing some retail outlets.”

He pointed out that a ‘one size fits all’ approach to town centres would not succeed and that policy should reflect this, with each individual town requiring individual solutions and continued by saying that,

“In future, County Councils need to work far more closely with Town Councils. When I go around Pembrokeshire it would be easy to be depressed, but there are people in our communities setting up new shops and trying to bring new retail to their communities.”

To this, he cited the new shops in Milford Haven and Haverfordwest, and the raised quality of their retail produce. Mr Crabb pointed out that those people willing to take risks are the people who need every bit of backing they can get from all aspects of Government. He finished by stating that,

“The future of town centres will not be in the hands of big business but in those of local entrepreneurs”.

Whatever may be the future of Haverfordwest, it may take a little bit more than the encumbant County Council’s ‘streetscape paint scheme’ or a lowering of business rates to regenerate these historic and essential community centres and, as Stephen Crabb suggests, a new approach may be necessary to restore our prestigious market town to its former glory.