Home » Flying the flag for Pembrokeshire 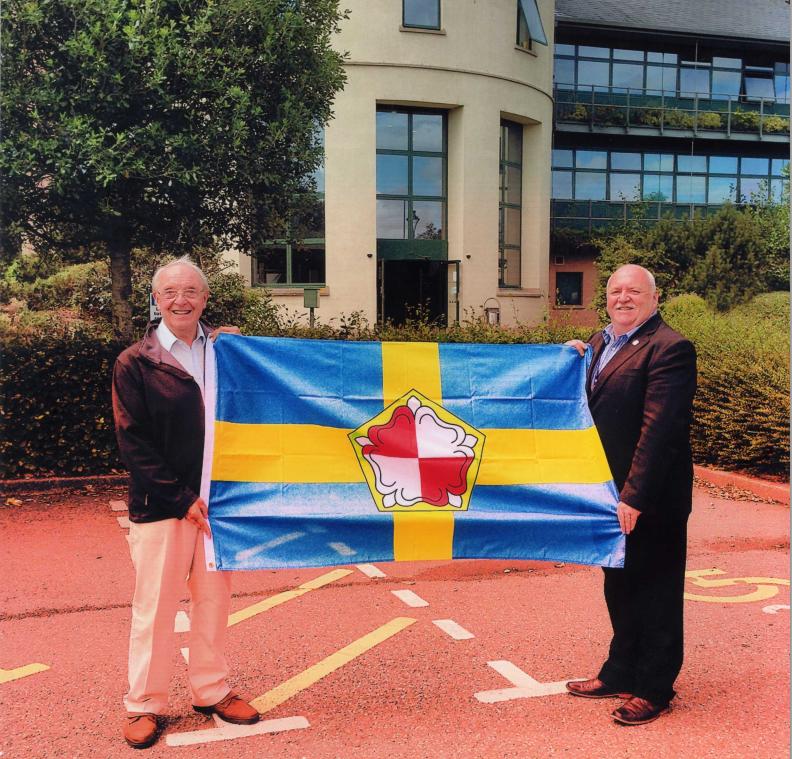 A familiar face at many events waving the flag for his beloved Pembrokeshire is County Cllr. Peter Stock.
Peter, who championed the return of the county of Pembrokeshire, supported the design of the flag Cllr. Dewi Pritchard, and now raises substantial amounts of money for charities by selling the flags at every opportunity.
Whether it is a small hand-waving flag, a lapel badge or a full-size to display from a pole (now seen flying at County Hall thanks to Cllr. Jacob Williams), Peter is the man to contact.
In the last 12 months, Peter has raised over £1000 which is donated to many charities, including the Mayor of Narberth and Mayor of Haverfordwest charity funds and more recently a donation of £160 to the British Heart Foundation. Peter has been joined by County Cllr. Phil Baker to sell flags in Saundersfoot in advance of the Ironman event.
Phil raised £100 in the village to add to a similar amount raised by Peter which has been donated to the county’s hospitals.
Phil commented: ‘’I was eager to show a warm Pembrokeshire welcome in Saundersfoot for all of the Ironman contestants who pass through the village twice on the 112-mile cycle element of the endurance event. I was delighted that the villagers and particularly my neighbours in Rushy Lake and Broadfield Hill were so supportive; Heart Break Hill, which stretches from the village to New Hedges roundabout was a sea of colour. It was definitely the best place to watch the cycling on Sunday.’’
Peter further commented: ‘’I was thrilled that Phil wanted to support my fund-raising efforts and promote the Pembrokeshire flag at the same time. I sold flags in Tenby over the Ironman weekend many people also supported the competitors by waving a Pembrokeshire flag.’’