Home » Green project cancellation could be an ‘opportunity’ 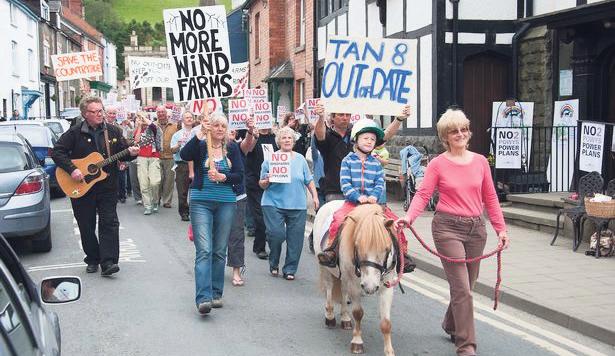 A CONTROVERSIAL plan for a multi-million pound wind farm in Powys has been scrapped by a power company in a move welcomed by anti-turbine campaigners. Scottish Power are ditching proposals for a £64m wind farm at Dyfnant Forest, at Lake Vyrnwy, after working on the proposals for six years. Company chiefs said the reasons were the length of time for the planning process and a need to modernise the grid, for pulling the plug on the project to build 35 x 600ft wind turbines there.

The company had said the scheme would have provided power for up to 65,000 homes. Campaigners had protested against the plans with concerns over the damage to tourism. Simon Christian, UK Managing Director of Scottish Power, told The Pembrokeshire Herald: “Unfortunately, with anticipated lengthy planning processes and major grid modernisation required, we are not confident the project can be delivered in a time frame that would make it financially viable for us. “We are currently seeking to replace our turbines at Llandinam in Mid Wales, and we await a planning decision following a lengthy Public Inquiry.

We have decided to focus our onshore wind efforts in Wales on this project. “We have been an active wind power developer in Wales since 1992, and we hope that our association with renewable energy in the country will continue for many years to come.” Concerns had been raised by residents it could have harmed the horse-riding tourism there, where there was a network of trails. Scottish Power had said the development of 35 turbines of up to 185m – costing around £2m per turbine – would have a generating capacity of up to 120 megawatts (MW).

Glyn Davies, Conservative MP for Montgomeryshire, has welcomed Scottish Power Renewables’ decision. He said: “It is a wonderful Christmas present for the people who live near Lake Vyrnwy and who share my love for the wider Dyfnant Forest area. Scottish Power Renewables’ plans were in my opinion ecologically and environmentally disastrous for a beautiful part of mid-Wales.” The scrapping of the scheme throws Pembrokeshire’s potential as a mecca for green energy projects into sharp relief. There has been a massive increase in the number of applications for wind turbine construction in Pembrokeshire in recent years.

There has also been increasing public opposition to wind turbine developments which disfigure previously unspoiled rural vistas. While smaller developments abound, larger developments that have been occasionally mooted have not progressed very far. A look at the number of proposals for wind turbine construction in Pembrokeshire reveals that until 2012 there were very few applications indeed. Between 2007 and the end of 2014 in excess of 450 developments have applied for planning consent from the local authority including wind turbine or wind farm provision, the vast majority of those made since the beginning of 2012.

Those developments have ranged from the controversial single turbine slated to provide energy to Prince’s Gate Water in Tavernspite, to the current wind farm proposal at Rhoscrowther that ties into extant infrastructure from the nearby refinery. The tension between the Council’s need to protect Pembrokeshire’s tourism offer and to obtain even short term jobs in an area of high unemployment is perhaps best demonstrated by reference to the conduct of one planning committee member from the local authority.

Herald readers will recall the tale of the proposed wind turbine development at Mathry that was opposed by everyone but Council planning officers. That planning committee member refused to inspect the location of a proposed development near Mathry, despite being transported to the site at public expense. His conduct suggests that some councillors take their planning duties lightly.

One member of the planning committee, Cllr Brian Hall, has even been alleged to have canvassed local support for a controversial scheme to burn oil waste on reclaimed land that needs to be raised above the level of an existing flood threat identified by Natural Resources Wales before construction can take place. Ambitious solar farm projects have received approval from the Council’s planning officers and Pembrokeshire’s importance to the Welsh Government’s green energy policy is highlighted by the Welsh Government’s endorsement of a plan to build a biomass power plant on the Blackbridge site.

Ambitious schemes to harness the power of the tide are also well underway. Invented by Pembrokeshire engineer Richard Ayre, the DeltaStream device is the first project to receive precautionary ‘deploy and monitor’ environmental consent in a designated Marine Special Area of Conservation’, having incorporated a number of design features to minimise any potential impact on the surrounding environment. An extensive suite of monitoring equipment will be installed on and around the device in Ramsey Sound. The £3.5m of public money announced to cushion the blow of the Murco takeover deal’s collapse, could be used to seed smaller enterprises focussed on supporting or developing the nascent green energy sector in our county.