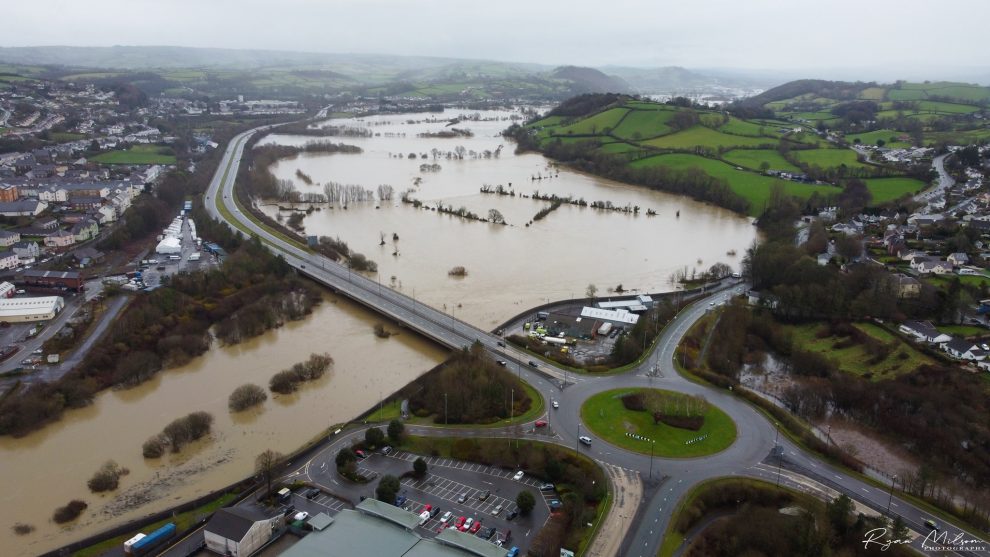 THE rain has stopped, but the work to recover from a weekend of heavy rain and flooding that had significant impacts on south west Wales has just begun.

For Natural Resources Wales (NRW) officers this means inspecting flood defences and other assets to assess and repair any damage caused by the high river levels and volumes of water.

Significant levels of rain fell across Wales, hitting south west Wales particularly hard. This contributed to a considerable rise in river levels, prompting the issuing of 26 flood warnings and 41 flood alerts on Saturday.

Communities across the south west were affected, including Llandysul, Llangunnor in Carmarthen, Newcastle Emlyn and Crickhowell. River levels on the Tywi, Teifi and Dee were also particularly high.

There was some disruption to transport across the south west.

Jeremy Parr, NRW Head of Flood and Incident Risk Management said: “Flooding is damaging and devastating and our sympathies go out to anybody impacted by these floods.

“While some communities were significantly affected, for many the flood defences did their job and reduced the worst of the impacts.”

Early preparation ahead of the predicted weather was also carried out. We had extra officers working, checked assets and ensured that drainage grids and screens were clear, as well as operated flood assets such as the flood gates at Abergwili. We also worked closely with emergency response and local authority partners throughout the weekend.

Jeremy added: “Early planning, close monitoring of rainfall and river levels, and issuing early flood warnings gave us, our partner organisations and residents opportunity to prepare as much as possible for the forecasted weather.

“We now have our people out and about checking our defences for any damage, and to ensure they can continue to help protect people and property.

“We will be working with our partners in local government and the emergency services to ensure we continue where possible to reduce the impacts of incidents like this.”

For up to date flooding information and advice on what to do before, during and after a flood visit the flooding section of the NRW website.