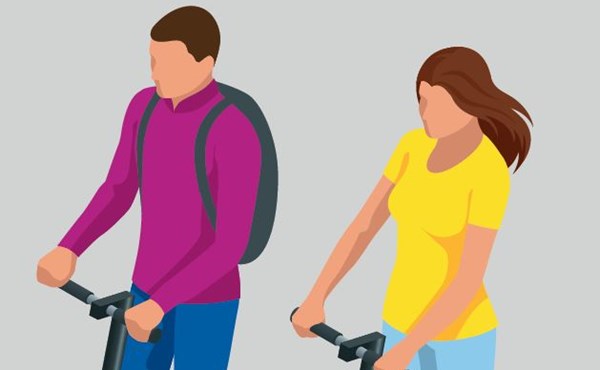 SAFETY campaigners are pushing for competency testing and compulsory helmets for e-scooter riders if the Government lifts the ban on riding privately-owned e-scooters in public spaces.

“Up to three quarters of a million more e-scooters will be on the roads if riding privately-owned e-scooters is legalised in public areas,” said John McQuater, president of APIL, a nationwide not-for-profit campaign group which hosts Injury Prevention Week (June 27 – July 1) every summer.

The Government has indicated that it intends to run a public consultation on measures for the use of private e-scooters.

“We expect the legislation at some point this year, so we’re using Injury Prevention Week to highlight what needs to happen to make e-scooters safe for everyone. This is not just about the riders, as a quarter of injuries involving e-scooters are suffered by pedestrians and other road users,” John explained.

“Those e-scooters seen weaving their way around city centres currently are from the rental schemes, which are the only e-scooters which are legal to ride in public areas at the moment. E-scooters are eco-friendly and fun, but the number of casualties in collisions has already shot up by 181 per cent in a year* and we’ve not even had the influx of the privately-owned ones yet,” he said.

“These forward-thinking measures could go a long way to preventing many needless, and sometimes life-changing, injuries and deaths.

“E-scooters in the rental schemes are limited to a top speed of 12.5mph. This should be the same for ones owned privately but measures need to be in place to make sure that the e-scooter’s speed capabilities will not be tampered with after purchase, and that it won’t be tolerated,” he went on.

“We are urging the Government to enforce a minimum rider age of 16, to tie in with the law for riding a moped. And if someone does not already have a full or provisional driving licence, they should be subject to a compulsory proficiency test.

“Education and training about e-scooters should be included as part of the motor driving test. All road users need to be clear about safe passing distances and rights of way.

“It also needs to be a requirement to wear a helmet. Head injuries, along with broken bones, are the most common types of injuries in e-scooter collisions,” John concluded.

Richard* was hit by an e-scooter as he was leaving his job in a warehouse in Nottingham to go home at the end of his shift.

The 40-year-old was hit by a woman riding a privately owned e-scooter. . He suffered multiple injuries including a fractured toe and injuries to his neck, shoulder and back.

At the time of the collision, he had two jobs – a warehouse operative and delivery driver. Richard’s injuries have forced him to have almost four months off all work and he has only been able to return to one of the two jobs.

He said: “My view is that e-scooters should be illegal unless drivers pass an appropriate test and are insured. At the moment they are an untaxed and unsafe nuisance that harm innocent people. The majority of e-scooter users that I see, even ones using legal hire scooters are not wearing helmets and many look unsafe. They are not just putting others at risk, but also themselves.

“I am just one of thousands of people injured by e-scooters. I am not happy being a statistic. There needs to be proper safety measures put in place.”

Phil Liptrot, a road traffic specialist at Thompsons Solicitors, said: “The law surrounding e-scooters needs to be clarified urgently.  As a minimum there should be compulsory testing and insurance to raise safety standards and ensure that people injured by scooters through no fault of their own can claim compensation more quickly.”

*In 2021, there were 1,359 casualties in collisions involving e-scooters, compared to 484 in 2020 – an increase of 181%. Provisional data supplied by police forces on 3 May 2022. https://www.gov.uk/government/statistics/reported-road-casualties-great-britain-e-scooter-factsheet-2021/reported-road-casualties-great-britain-e-scooter-factsheet-2021-provisional

**not his real name.