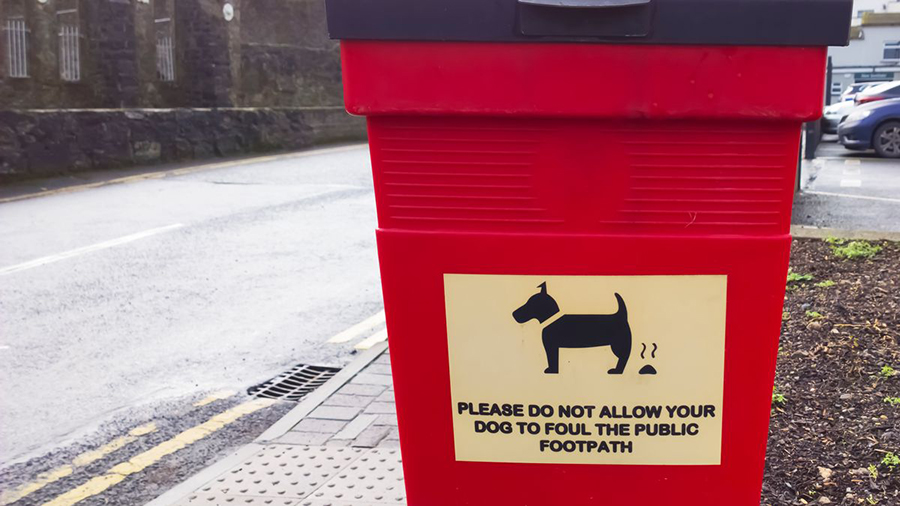 Walking the dog has become one of the few opportunities to get outside for some fresh air during lockdown, but it has come at a stinking, germ-ridden cost..

A Llanelli rubbish collection company says that dog poo litter is up 200%, a clear indicator that not all dog owners are cleaning up after their pups. Just as bad are those who bag the poo, and then dump the bag in the street or up a tree.

Divert.co.uk who provide dog poo litter removal for councils and private landowners are alarmed by this increase and the implications this could have for public health and are calling on irresponsible owners to pick up after their dogs.

“It is disgusting to see that some dog owners are failing to pick up after their pets, when it’s an offence and the waste can lead to serious illnesses,” says Divert.co.uk spokesperson Mark Hall.

“There is more poo than people on the streets of Llanelli right now.”

With Lockdown Three in full-swing, current England guidelines allow for people to walk their dog alone, with their households or support bubbles, or while exercising with one person from another household.

Hall: “Walking your dog is important for both pet and owner for exercise, especially while we are all house-bound during the lockdown.

“Unfortunately, thanks to the thoughtless behaviour by a few individuals, dog owners are once again getting a bad reputation due to a massive increase in dog mess on the streets.”

Divert.co.uk believe that due to fewer people being out and about, irresponsible dog owners believe they are less likely to get caught, so are more like to leave the poo and run.

Thankfully, not all dog owners will leave poo on the pavement, as waste campaigners Keep Britain Tidy, who have run high profile campaigns such as the ‘dog poo fairy’, have found that 9 out of 10 dog owners do regularly clean up after their dog.

The 10% who do not clean up after their dog could be issued with a Fixed Penalty Notice of up to £100 for failing to pick up their dog’s waste, which could go up to £1,000 if the issue goes to court.

“There really is no excuse for this behaviour, especially as the waste can be put into any public bin,” says Hall.

“It’s lockdown laziness, especially those guys who bag the mess, then don’t bin the bag. Get a grip!”

Poo pollution that can make you poorly

Not only is dog poo on the streets unsightly, but it could also be hazardous for you and your family’s health.

In extreme circumstances, contact with dog poo can cause toxocariasis, an infection which can lead to dizziness, nausea, asthma, and in worse case scenarios, blindness, or seizures.

And even more unfortunately, it’s often children who are the poor victims of falling into dog poo and putting themselves at risk of catching a nasty infection.

One girl, aged 5, was traumatised and physically sick after falling face-first into dog poo at a Halifax park, which was poorly disguised under a pile of leaves.

Emelia was walking home from school when she fell, and her mum is now calling for dog owners in the area to be more responsible, especially on busy routes around the school where children are more likely to fall into it.

Likewise, an 18-month-old ended up with a ‘face full of’ dog poo while out on a daily walk with his mother in a pack in Ascot, and just after the first national lockdown, one Scottish family had a close call as their 11-month-old picked up and ate dog poo in a local picnic area.

Hall: “We understand, it’s cold and we’ve had some snow recently, but thinking it’s quiet enough to get away with leaving it is no excuse not to pick up after your dog.

“The snow will eventually melt away, but your dog’s frozen turd will still be there for some poor bugger to step in.”

Principality performs well as it supports customers during pandemic

The UK’s Most Instagrammable Waterfalls Revealed

Welsh Cobs return to the farmyard at Llanerchaeron