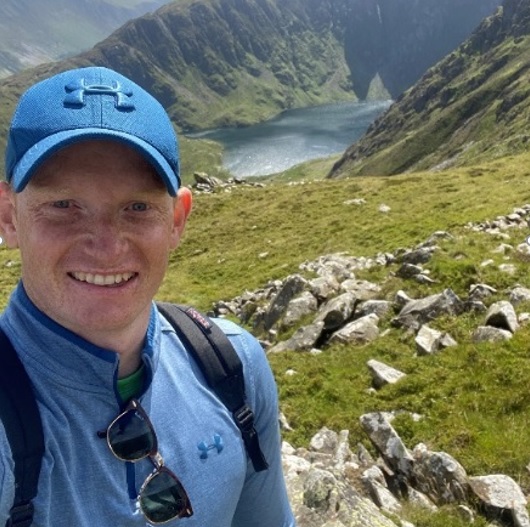 IT’S A CASE of “the sky’s the limit” for one naval man from Comins Coch, Aberystwyth, as Gareth Whalley launches a fundraising raffle which will run throughout February in support of his local NHS charity.
Later this year, the 26-year-old Navy Outdoor Instructor, whose girlfriend is an NHS junior doctor and mum is a nurse, will face his fears and take part in a fundraising skydive for Hywel Dda
Health Charities, the official NHS charity for Carmarthenshire, Ceredigion and Pembrokeshire.
Gareth says, “When I do the skydive, I will be absolutely terrified. I’ve not done one before and I’m scared of heights. Once the skydive is done I will feel relieved and a sense of accomplishment. Sending in the money I have raised from the raffle and skydive will feel good and I will feel like I’ve made a difference.
“I’m doing this to say a huge thank you to the NHS staff, who have been through so much. I also want to do something to lift the spirits for the general public, have something fun to do during this time and also to give the opportunity to win some great prizes.”
Gareth’s mum Heather is a nurse at Hywel Dda and has worked in the NHS for over 40 years. She says the whole family is proud of Gareth, “My current role is a Team Leader for School Nursing in
Ceredigion and I now feel privileged to be a coordinator for the Covid immunisation programme, initially at Cardigan, but now at the Thomas Parry Centre in Aberystwyth which is my home town.
“The NHS has meant a great deal to us as a family, initially when my daughter Rhian was first diagnosed as a Diabetic Type 1 at the age of 7, and now as she is pregnant with her first child, the care she is receiving has been exceptional.

“We as a family are very proud of Gareth for the work that he is undertaking to raise money for the NHS. He has taken himself out of his comfort zone by doing a skydive and now he has decided to raise further money by holding a raffle with fabulous prizes that have been donated by local companies from Ceredigion, Carmarthenshire and Pembrokeshire.”
He’s spent weeks sourcing prizes from across the three counties, but says it will be worth it if he can beat his fundraising target of £1,000. Gareth says the prizes, which can all be claimed when COVID restrictions allow, include bed and breakfast for two in a 4* Spa Hotel with complementary spa access, a round of golf for 4 on a Welsh Championship course, a family ticket to watch the Scarlets play, some delicious goodies and vouchers
“The raffle is taking more organising than the skydive, but I have enjoyed sourcing some great prizes. I’m extremely grateful for all the local businesses for the unbelievably kind donations too, without them it wouldn’t have been possible,” he says.
Tara Nickerson, Fundraising Manager for Hywel Dda Health Charities said, “We’re always grateful to our supporters who want to give back and show their appreciation for the NHS – whether it’s their way of thanking staff for the exceptional care they or a loved one received, or, as we are seeing at the current time, a general acknowledgement for the exceptional work of the NHS through the Coronavirus pandemic.
“We really appreciate Gareth facing his fears and doing a skydive for us later this year, and it’s brilliant that in the meantime he’s found another great way to raise funds which will provide additional items for patients and staff above and beyond core NHS expenditure.”
To take part in Gareth’s online raffle go to https://raffall.com/179793/enter-raffle-to-win-hywel-dda-raffle-extravaganza-hosted-by-gareth-whalley
To find out more about the support Hywel Dda Health Charities offers go to www.hywelddahealthharities.org.uk