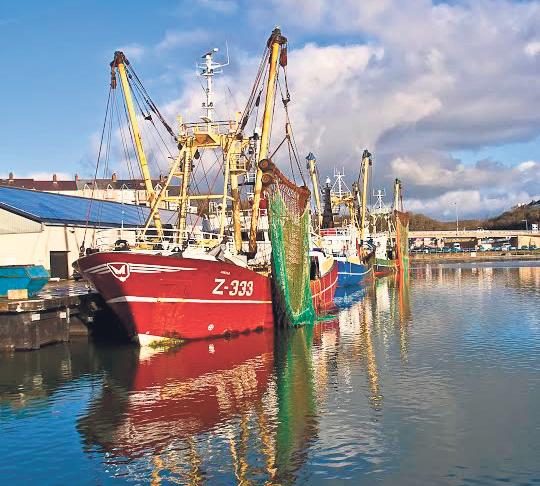 THIS WEEK saw a new deal brokered in Brussels on Britain’s fishing quotas, during an extended 30 hour set of talks. Fishermen in Britain have been told they will now be able to increase their catch of key fish, including cod, which will increase in 2015 by 5% from this year. This, however, comes in the face of scientific advice that suggests it should actually be cut by 20%. Speaking about the late-night deal, the UK’s fisheries minister, George Eustice, said: “Although these were difficult negotiations, I am pleased that we were able to secure the best possible deal to ensure sustainable fisheries and a strong UK fishing industry.

“While fishermen had feared there would be major cuts, we were able to keep the same quota as last year for many species, in addition to important increases to the North Sea cod and haddock quota, which will benefit Scottish fishermen.” There was also good news for UK fishermen in so much as they will now be allowed to catch 15% more prawns, 15% more plaice in the North Sea and a further rise of 6% in the Haddock catch, though there are reductions imposed in the Celtic Sea.

A reduction that could affect Welsh fishermen is that of sole yields in the Bristol channel. However, Andrew Clayton of the Pew Charitable Trusts, an organisation who advocate sustainable fisheries policy, said: “After decades of failing to get to grips with overfishing, the new common fisheries policy was supposed to bind ministers to setting sustainable fishing limits this year.

Instead, they have set a considerable number of [quotas] in excess of the level scientists advised, failing to meet the targets they set themselves for overfishing. “These are weak decisions, jeopardising the livelihoods of fishermen and the sustainability of stocks.” Adding to the concerns, was Greenpeace EU fisheries policy director Saskia Richartz, who said: “It is unacceptable that many of the fishing quotas agreed today fail to end overfishing. Ministers gave no justification for postponing action to recover fish stocks, despite new laws requiring that any delay is justified with appropriate evidence.”

The European commissioner for the environment, Karmenu Vella, said of the concluded deal: “We have succeeded in increasing the number of stocks that are now managed at sustainable levels. I can therefore say that sustainably managed stocks are now a broadly accepted concept across the EU. “This will allow fishermen to progressively reap more and more benefits in terms of higher catches for these stocks. “This is because science-based decision-making is increasingly becoming the norm.

We have worked with [ministers] to ensure that where we do not follow science, member states take the necessary decisions to avoid a real disaster happening later.” Speaking for the Port of Milford Haven – Alaric Churchill, Marina and Docks Manager told The Herald: “Quotas, like the weather, can have a huge impact on the livelihoods and businesses that depend on fishing in Pembrokeshire and we welcome decisions on quotas which will help boost sustainable fishing in Welsh waters.

As the owner of Milford Fish Docks, what we are doing is focusing on continuous improvement of the facilities and services available to the fishing fleets here in Wales’ busiest and most successful fishing port and creating more business opportunities for the industry here in Wales.” The manager added: “We promote the sourcing of sustainable and high quality seafood and are optimistic that fishing has a bright future here.