Home » A “spiteful” burglar who targeted the home of a bride knowing she would be at her wedding has been jailed. 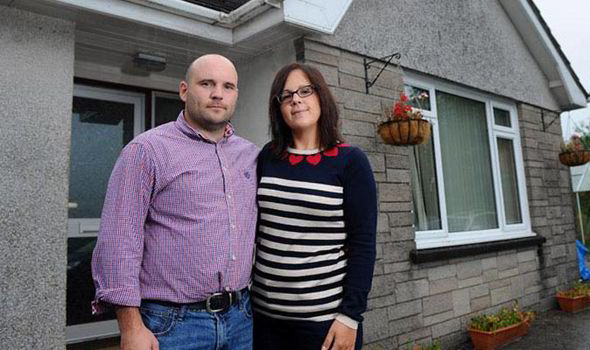 Ceri Davies, 26, broke into Annwen Bell’s home as she was marrying her long term partner Jonathan.
Davies “trashed” the house after learning that his mother, Jill, had not been invited to the wedding.
Annwen Bell’s father had left home two years earlier and formed a relationship with Davies’ mother.
As Annwen and Jonathan planned their wedding it was decided not to invite Jill Davies “to keep the peace”.
They invited her father but Annwen refused to allow him to give her away.
Janet Gedrych, prosecuting, told Swansea crown court how Davies broke into the couple’s home at Maes Gwyn, Llanfair Clydogau, west Wales, on the afternoon of May 25 knowing that the couple were due to be married at 3pm and to then enjoy a reception in the seaside village of Aberaeron 20 miles away.
“It was motivated by malice,” she added. “It was targeted to that house due to the relationships between the parties
“Annwen had taken her mother’s side and there was ill feeling between the two sides.”
Davies caused Ł5,500 worth of damage, slashing furniture with a knife, leaving on water taps in a bathroom and the kitchen to cause flooding and using a hammer to leave imprints on computers, televisions and kitchen work surfaces.
He also stole Ł295 in cash, a 20 euro note and even the cards of congratulations for the marriage.
But, said Miss Gedrych, two men carrying out an archaeology study nearby heard the sound of breaking glass and challenged Davies.
They saw him leaving the property with a carrier bag and followed him.
They called the police who continued the chase until Davies threw away the bag and ran across a field.
But he was caught by police and arrested.
Miss Gedrych said police had to approach the couple at their reception that evening and explain that their home had been burgled and trashed.
In a victim impact statement, Jonathan Bell said, “Annwen invited her father to the wedding but she was not willing for him to give her away.
“It was such a special day and we cannot remember that day as we should.
“Gifts from her grandparents were broken. It does not feel like a home anymore.”
Jill Davies was also arrested after police became aware that her car had been in the area at the time. But she said she had given her son a lift so he could go for a walk and had no idea a burglary would be carried out. She was not charged with any offence.
Davies, of Room 2, 4 Albert Place, Aberystwyth, admitted burglary and causing criminal damage. He was jailed for three years and four months.
Davies’ barrister, Victoria Thomas, said Davies was addicted to cannabis at the time.
“That does not take away the pain that was caused to the couple. It was their wedding day.
“His mother accepts that what he did was terrible. She is ashamed at what he has done.
“He ruined their wedding day,” added Miss Thomas.
She said he turned on water taps in the hope of washing away any DNA evidence.
Judge Paul Thomas told Davies, “Any house burglary is taken very seriously by the courts. It usually causes psychological and emotional harm.
“In any way this was a particularly spiteful burglary. It was a revenge attack.”
Davies, he added, had set out to cause as much harm as he could to a woman on the most important day of her life.
“It was a simple dispute. Because of the wedding your mother had not been invited. It happens at weddings week in, week out.
“But you decided not only to burgle their home but to wreck it. You vindictively trashed their home.
“You made as sure as you could that they would come back and they would face a scene of heartbreaking devastation.”
Judge Thomas said Davies had a record for arson and criminal damage and “seemed to get a kick” out of destroying other people’s property and the pain it caused them.