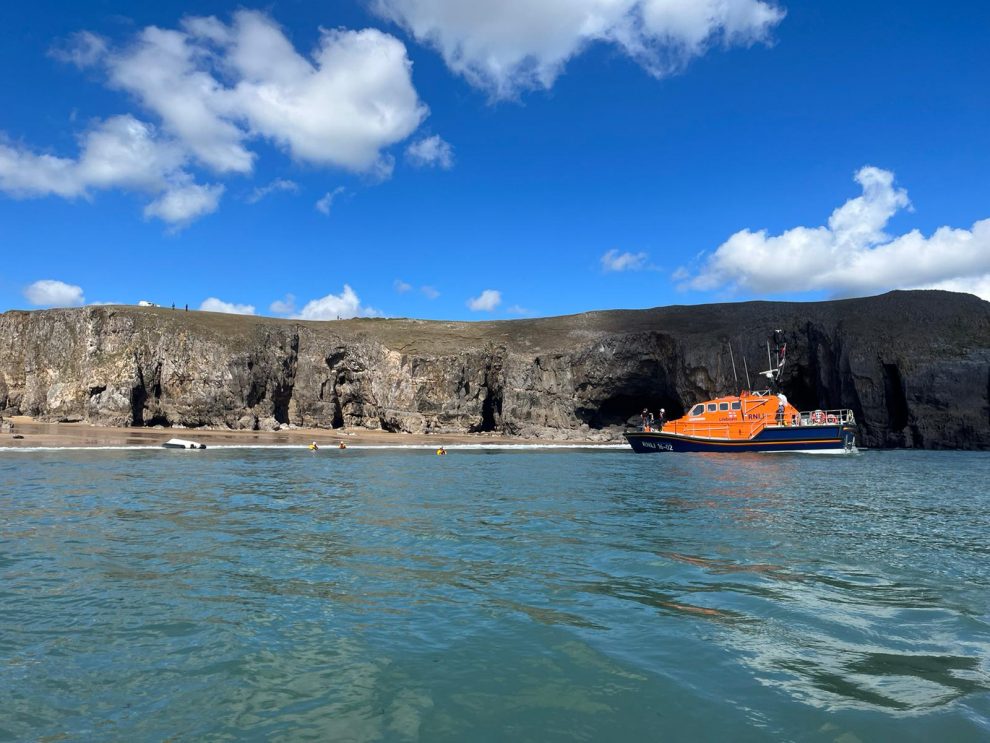 BOTH of Tenby’s lifeboats were launched just before 1pm on Saturday (Sept 10), following calls to the Coastguard stating that a boat had capsized in a swell off Box Bay near Stackpole.

There were reports that the occupants were in the water.

The volunteer crew made best speed to the area.

On board the inshore lifeboat was station Mechanic Will Horton who had abandoned his preparations for Ironman Wales the following day and instead, raced down to the harbour when his pager went off.

The boats were soon on scene and found the two occupants and their dog had luckily managed to make their way ashore at Box Bay, but were stranded with no way to scale the steep cliffs. St Govans Coastguard Rescue Team had also arrived at the top of the cliff.

The helm of the the inshore took the boat into the beach and the casualties and dog were taken aboard, before being dropped onto the larger Haydn Miller.

Next, the Haydn Miller went in towards the beach and passed their tow rope to the inshore lifeboat using the heaving line. The tow rope was then attached to the upturned vessel, before it was towed out to deeper water.

It was then righted by the crew of the inshore lifeboat.

With the boat now the right way up, it was towed back to Lydstep, where the occupants were taken ashore and their boat put back on the trailer.

The lifeboats then returned to station, arriving at 3.50pm.

The crew said: “Good luck in the Ironman Will and also fellow crew member Rhys Thomas from all at the station!”

The RNLI also released safety advice today, at the end of the summer season.

As RNLI lifeguards in Wales bring the majority of their seasonal daily patrols to a close, the charity is urging anyone planning a trip to the beach over the autumn and winter months to keep safe and respect the water.

The majority of lifeguard patrols came to an end on Sunday. The service will however resume at a select number of locations such including Langland, Caswell, Rest Bay and Trecco Bay until later this month.  Whitesands beach in Pembrokeshire will also continue to enjoy a lifeguard presence over weekends until November.

Chris Cousens, RNLI Water Safety Lead for said: “We’ve seen an exceptionally busy summer season where people in their thousands flocked to our beaches. Lifeguards responded to a wide range of incidents and activities including rip currents, paddleboarders, body boarders, swimmers, jet-skiers, kayakers, surfers, paddlers and those on inflatables. Our lifeguards across Wales were involved in carrying out water rescues, administering casualty care, delivering water safety information, and helping to reunite missing children with their families.

“The public will see our lifeguards on daily basis at a limited number of beaches such Rest Bay until the 25th and Langland, Caswell and Trecco until the 18th. There will continue to be a presence at Whitesands until November but for the majority of our lifeguards the season has now come to a close.

“It’s therefore more important than ever to understand the hazards of your environment and take the time to read safety signage on the beach or ask for some safety advice at one of the local surf shops before heading into the water.

“While we can expect our beaches to be quieter, there will be people using the water for activities such as surfing and kitesurfing. In the absence of RNLI lifeguards during this period, we would encourage visitors while enjoying themselves, to be mindful that the water will be colder, and the sea can be dangerously unpredictable.

“Taking basic precautions can greatly reduce the risk of getting into difficulty and improve your chance of being found quickly should you need rescuing. With this in mind, we urge beach visitors to come dressed appropriately to ensure your visit is both safe and enjoyable. Before you head out, always check weather and tide times, let someone know where you are going and when you are due back, and carry a means of communication such as a mobile phone in a waterproof pouch. For activities like paddleboarding, we’d recommend you wear a wetsuit, as it will keep you warm in an emergency. Wearing an appropriate buoyancy aid or lifejacket is also vital. If you get into difficulty or see someone else in trouble, please call 999 or 112 and ask for the Coastguard. People can also get advice at their local RNLI lifeboat station.’