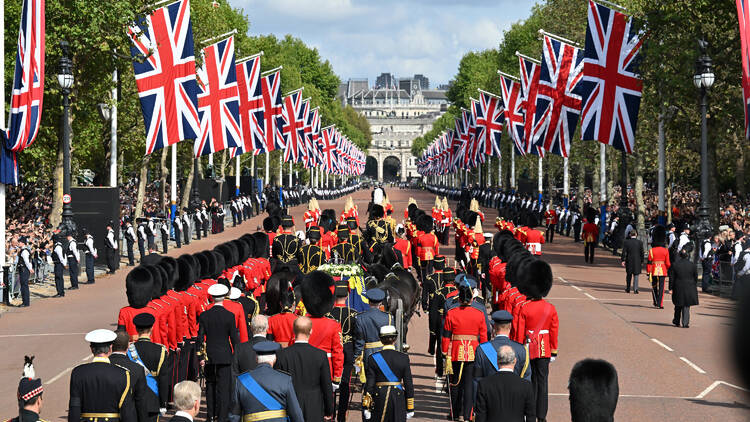 THE QUEEN’S state funeral is taking place with ceremonial processions in London and Windsor today. This is the latest update at 12:40pm.

The UK’s longest-serving monarch will be laid to rest after a state funeral.

The Royal Family, world leaders and dignitaries have descended on Westminster Abbey to honour the life of Queen Elizabeth II, after her death at the age of 96.

At 10.44am, the Queen’s coffin travelled from the Palace of Westminster (Houses of Parliament) to Westminster Abbey for the state funeral.

This is a very short journey, and was not be part of the public procession.

The state funeral service was conducted by the Dean of Westminster and The Sermon and the Commendation will be given by the Archbishop of Canterbury.

During the Service, the Prime Minister and the Secretary General of the Commonwealth read Lessons.

The Archbishop of York, the Cardinal Archbishop of Westminster, the Moderator of the General Assembly of the Church of Scotland and the Free Churches Moderator said prayers.

The Procession from Westminster Abbey to Wellington Arch

At the end of the Service, Her Majesty’s coffin wase borne to Wellington Arch, via The Mall on the State Gun Carriage.

The King’s Guard gave a Royal Salute as the Coffin passes the Queen Victoria Memorial.

All processions and services are being broadcast on near-all national television and radio channels.

When the Coffin reaches Windsor, the State Hearse will slow to join a Procession to be formed up on Albert Road to travel via the Long Walk to St George’s Chapel. Members of the Royal Family will join the Procession in the Quadrangle at Windsor Castle. Minute Guns will be fired on the East Lawn, Windsor Castle by The King’s Troop, Royal Horse Artillery, and Sebastopol Bell and the Curfew Tower Bell will be tolled throughout the Procession.

The Procession will halt at the bottom of the West Steps of St. George’s Chapel where a Guard of Honour, found by the 1st Battalion Grenadier Guards, will be mounted. The Queen’s Coffin will be borne in Procession into the Chapel.

The Committal Service will begin at 4pm, and alongside His Majesty The King and Members of the Royal Family, the congregation will be made up of past and present members of The Queen’s Household, including from the private estates. Also in attendance will be Governors General and Realm Prime Ministers.

The Service will be conducted by the Dean of Windsor, with prayers said by the Rector of Sandringham, the Minister of Crathie Kirk and the Chaplain of Windsor Great Park. The Choir of St George’s Chapel will sing during the Service.

Prior to the final Hymn, the Imperial State Crown, the Orb and the Sceptre will be removed from Her Majesty The Queen’s Coffin, and placed on the Altar. At the end of the final Hymn, The King will place The Queen’s Company Camp Colour of the Grenadier Guards on Her Majesty’s Coffin. At the same time, The Lord Chamberlain will “break” his Wand of Office and place it on the Coffin.

As The Queen’s Coffin is lowered into the Royal Vault, the Dean of Windsor will say a Psalm and the Commendation before Garter King of Arms pronounces Her Majesty’s styles and titles. The Sovereign’s Piper will play a Lament and The Archbishop of Canterbury will pronounce the Blessing. The National Anthem will be sung at the conclusion of the Service.

Not seen on the streets of London since the funeral of Sir Winston Churchill in 1965, the State Gun Carriage will be pulled by 98 Royal Navy sailors, with a further 40 marching behind acting as brakes. The King and Members of the Royal Family will again follow The Queen’s Coffin in Procession. The Procession will include detachments from the Armed Forces of the Commonwealth, as well as detachments of the British Armed Forces who held a special relationship with The Queen.

A Private Burial will take place in The King George VI Memorial Chapel later that evening, conducted by the Dean of Windsor.

The Queen is to be buried together with The Duke of Edinburgh, at The King George VI Memorial Chapel.