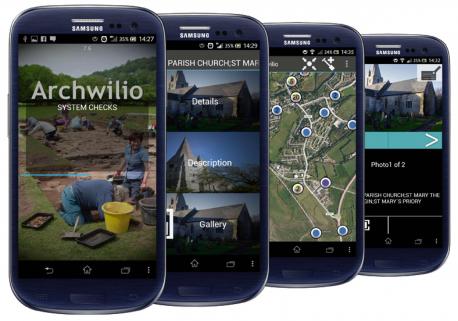 EXPLORATION of Wales’ archaeological treasures is set to be transformed, not only for those with limited knowledge of archaeology but also seasoned archaeologists alike, with the launch of the fun and interactive Archwilio APP –a world first for Wales.

The Archwilio APP, commissioned by the four Welsh Archaeological Trusts and designed by the University of South Wales’ Centre for Excellence in Mobile Applications and Services (CEMAS), is the first time a whole country’s archaeological records have been listed in one APP. Free to download, the Archwilio APP, will be launched on Thursday 7th November by The Minister for Culture and Sport, John Griffiths, at the National Museum Wales in Cardiff.

The APP, which has been designed from scratch in Wales, is a highly flexible new tool for anybody wishing to explore thousands of archaeological sites across Wales. The APP will enable professionals as well as members of the public to access the extensive records held for Wales from anywhere – be it a city centre, beach or mountainside.

The APP holds information on a vast range of archaeological sites from the well known to the quirky. These include details on a conservation project undertaken on a substantial ‘lost’ coastal medieval settlement near St Ishmaels in Carmarthenshire.

Another record provides details of a Roman trading settlement alongside the Menai Strait on Anglesey. The site was investigated by Gwynedd Archaeological Trust following significant finds of Roman date. Geophysical survey and excavation have revealed evidence for a substantial settlement of a rare type in Wales. There are no surface remains, but the APP would allow walkers on the Anglesey coastal footpath which runs through the site to be made aware that they were walking through a 2,000 year old settlement.

At Strata Marcella Abbey, to the north of Welshpool, the Clwyd-Powys Archaeological Trust has been investigating the site of the Cistercian abbey of Strata Marcella. Founded in 1170 it was already partially ruined at the time of the dissolution of the monasteries n 1536 and today there is very little left o see of a once grand religious site.

Louise Austin, Head of Heritage Management, Dyfed Archaeological Trust, said, “The launch of this free APP is a world first for Wales and enables archaeological records for the whole of the country to be available on one APP.

“However, the archaeology of Wales is a truly moveable feast and that is the beauty of the new Archwilio APP. The technology enables us to update records as soon as new evidence for existing archaeological features is found or as new sites are uncovered in Wales.

“We want to make archaeology as easily accessible as possible for all. Downloading the APP will enable users to access millennia of archaeological information specific to Wales, providing a fun resource to improve education and understanding of the importance and sheer variety of Wales’ archaeology. The APP will also enable locals and visitors alike to go out and explore the unique heritage and archaeological sites across Wales.”

John Griffiths, The Minister for Culture and Sport, added, “The new Archwilio phone APP puts the heritage of Wales on the map. Available to download for free, it makes it possible for anyone with a suitable smartphone to access information on the thousands of known archaeological and historic sites in Wales. The historic environment records of Wales were already available online, but with the launch of the Archwilio APP Wales will make this wealth of information, collected by generations of investigators, available to mobile users, allowing them a glimpse of the hidden heritage all around us.

“The Archwilio app marks an important leap forwards in using technology to discover the heritage of Wales. As well as allowing users to check records, the app can be used to add information, opening up opportunities for volunteers to get directly involved in archaeological recording and investigation. The Archwilio app truly opens archaeology to everyone in Wales.”