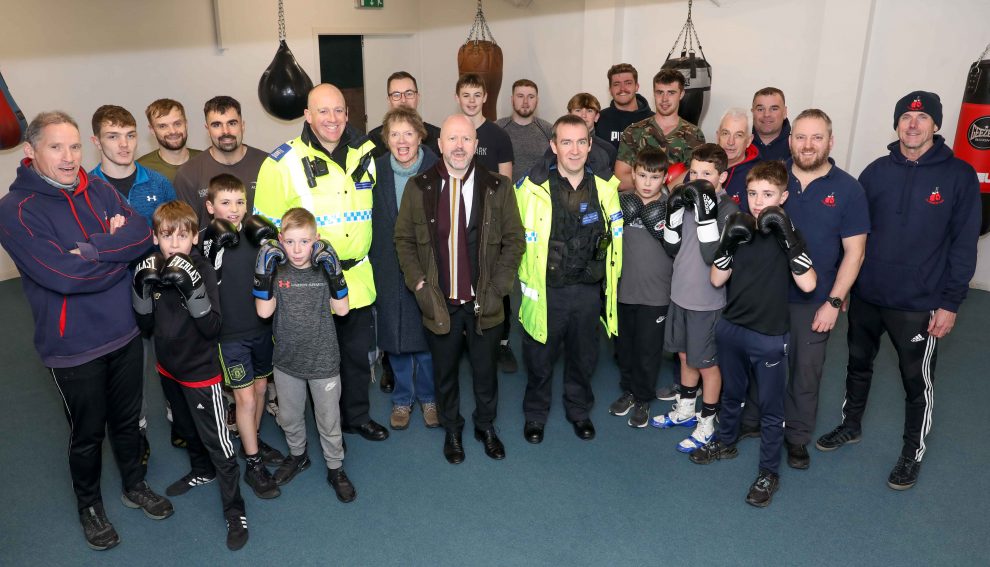 AN ANGLESEY boxing club is appealing for more women and girls to join as it launches a recruitment drive after a major investment in new facilities and equipment.

Llangefni Boxing Club has had its headquarters in the town’s Old Cricket Club given a revamp and now it has invested in new equipment thanks to a £2,000 grant from the North Wales Police and Community Trust (PACT).

They bought an impressive array of gear including three specialist punchbags worth over £700 and key protective kit such as four headguards at £90 each plus of course that boxing gym essential, 10 skipping ropes at £18.99 a time.

They also hope that new changing and toilet facilities attract more women and girls to take up the sport at the club which was founded in 1987.

Boxing has a proud heritage in Llangefni according to head coach Derwyn Williams who said: “The club has been going for 35 years and has produced a number of Welsh champions including Geraint Pritchard who won three national titles.

“We’re very welcoming, anyone can just turn up and the aim for us is to keep the costs down so the kids can join and we’re really keen to attract more women and girls now that we’ve upgraded our facilities.

“They can just turn up – we take them from the age of nine upwards and it gives them a goal because a lot of our members do come from deprived areas and boxing teaches them discipline and respect, keeps them fit and off the streets.

They were nominated for the grant by local Police Community Support Officer Carwyn Gilford who said: “The club is a really positive place and gets a wide range of different ages involved.

“That way it builds good relationships with different parts of the local community and a positive bond between people of different ages.

“We knew the club was a force for good in the community and this was a way of making sure they could get the quality equipment they needed.”

Phillip Green, 17, from Llanerchymedd, has been a member for five years and is one of three Llangefni boxers competing in the Welsh Novice Championships in Cardiff this month.

He said: “I was getting into fitness and a mate of mine was coming here so I came along with him and have stayed with it.

“I love it. There’s nothing better. It keeps you fit and out of trouble and teaches you discipline.”

Arron Jones, 14, from Llangefni, said: “I’ve been coming here for four years and really enjoy it. I love getting in the ring and I’ve competed in Wales and in England, in Manchester and Liverpool.”

PACT Chair Ashley Rogers said: “I’m delighted that we’ve been able to support the club with £2,000 for specialist equipment – it is a really important community hub which has been going for 35 years.

“It’s a great opportunity to improve mental and physical health and teach self-discipline and I’m delighted that the local neighbourhood policing team have such a close relationship with the club.

“The nature of the equipment the club has been able to purchase is far superior to anything we used to have as youngsters – it’s very specialist kit which is designed to be safer and that’s especially important for young people taking up the sport and whose bodies are still developing.”

Llangefni Boxing Club is just one of many community organisations supported by PACT, an independent charity launched in 1998 to support community initiatives, particularly those in which the police are involved.

In that time it has helped over 2,500 projects investing in communities across North Wales.

Ashley Rogers added: “For many who are involved in the projects, this is their first interaction with the police, so making this a positive experience can have profound consequences on their future life choices.

“From Gwynedd in the west across to Flintshire and Wrexham in the east, PACT continues to support projects that enable positive and sustainable community development and this has never been more important than right now.

PACT offer a range of grants of up to £2,000 for community projects – for more details and how to apply go to https://www.pactnorthwales.co.uk/applications-ceisiadau/

Pilot projects to tackle the impact of poverty
Care home closure and loss of 30 beds is a “disaster”, says social care leader