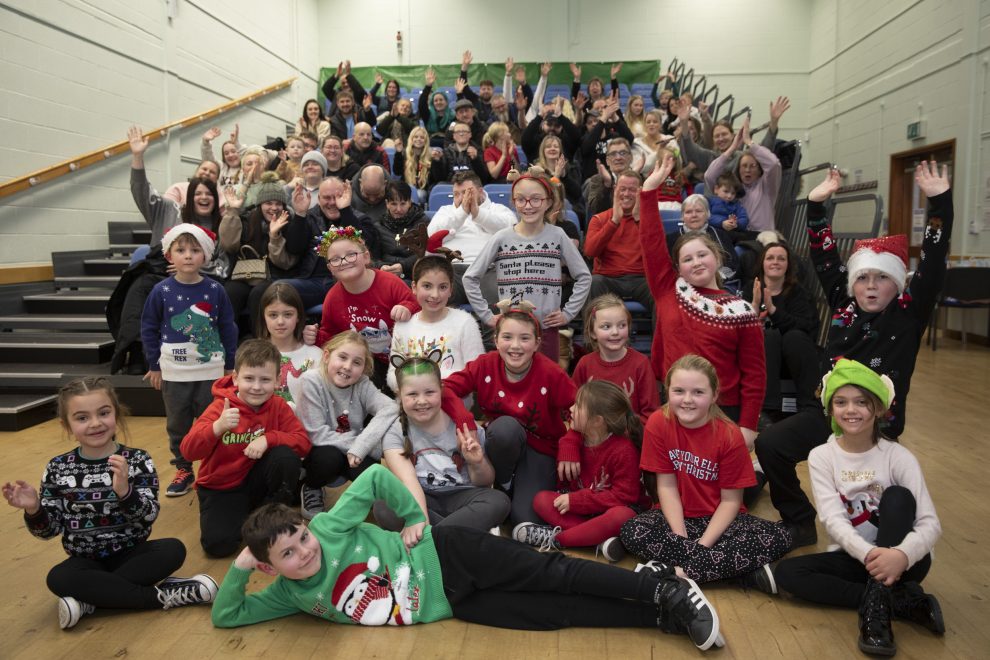 TALENTED youngsters showed off their dancing and singing abilities to an appreciative audience at their spectacular end-of-season show.

Grannies, mums and dads and siblings cheered and applauded enthusiastically during the show at the Craig-y-Don Community Centre in Llandudno.

The hour-long show was the culmination of weeks of rehearsals by the youngsters, aged between five and 10, who have taken part in a Popstars Academy which was organised by Creating Enterprise, a part of housing association Cartrefi Conwy.

Project Coordinator Jasmine Pilling said ‘Making Work: Work For All’ is a project funded by the National Lottery Community Fund to support working families living in social or private rented accommodation in the Llandudno, Rhos-on-Sea, Mochdre and Old Colwyn areas.

As the young performers tucked into specially-made cupcakes after the show, Jasmine said: “Our National Lottery funded Working Families project has funded a SB Popstars Academy to help working families that struggle financially. The children have been practising for their show and have recently performed to our tenants in warm welcome.

“They performed this evening where their families came and watched. They have sold tickets to help fundraise for their next term of SB Entertainment.”

Jasmine added the continued involvement of local families is key to the project’s success.

“We cover all out of pocket expenses, plus offer relevant training opportunities to parent volunteers.

“Between them, the families decided that what would benefit them the most were out of school activities and a loyalty card scheme in partnership with local businesses,” she said.

“We organised similar dancing and theatrical activities for children in the area during the summer holidays and this was a continuation,” she said.

A veteran of West End touring shows, pop videos and cruise ship performances, Sarah set up her dance school in Colwyn Bay nearly 20 years ago and runs classes for youngsters aged three to 60-plus.

“The sessions we’ve held as part of this project have given the children the opportunity to perform in public. It’s the first time in front of an audience for most of them and we’ve given them the confidence to do so while having fun and making new friends at the same time.

“Not everyone wants to be a dancer which is why we’ve been writing some poetry and reading them out. Some of the children have been nervous before performing but they’ve all done a wonderful job,” she said.

The Future Dance Teacher award was handed to six-year-old Kira, a pupil at Ysgol T Gwynn Jones in Old Colwyn

Her mum, Tasha Griffiths, said: “The classes have given Kira more than just more confidence. They’ve given her more focus and made her much more determined as well as making lots of new friends.”

Tasha proudly sat in the front row and used her mobile phone to take photos and make short videos of her daughter performing during the show.

“”It was very emotional watching her perform. I was nearly crying at times but I’ve been busy sending the videos to all the family.”

Sarah added: “Kira is a little entertainer and has a wonderful imagination.

“And she remembers all the dance routines. I go to many classes and teach lots of routines and sometimes I get them a little mixed up but Kira is very quick to correct me. I’m sure she’ll grow up to be a dance teacher and deserves her award.”

David and Gemma Maddock were impressed by the dancing ability of their daughters, Matilda, eight, and Gracie, four, at the show.

The girls, both pupils at Ysgol Ffordd Dyffryn, Llandudno, had “really looked forward” to the Tuesday evening classes.

“They spoke of little else before and after the practices and it’s nice to see what they’ve been doing,” said David.

Matilda and Gracie’s brother David was not as easily impressed by their sister’s dancing abilities however and slept soundly throughout the show.

“But then he is only six days old!” said Gemma.

Eight-year-old Finlay had not had any dance lessons before attending the weekly classes, said mum Sian Johnson.

“They’ve given him a lot more confidence and love to show off what he’s been doing at home.

“He also took part in the Christmas show at his school, Ysgol Morfa Rhiannedd in Llandudno, and you could tell that he’d been having acting and dancing lessons,” she said.

Finlay’s sister, Faith, was also part of the show and like her brother was presented with an award by Sarah and Jasmine.

Sian added: “The classes have really brought her out of her shell and as well as making new friends she’s learning what it’s like to be part of a team.”

Sarah Woosey said the Popstars Academy hope to get started again and begin preparing for their next show which will be staged at Theatr Colwyn in June.

“The children and their parents have already been asked to make a note of the date in their diaries,” she said.