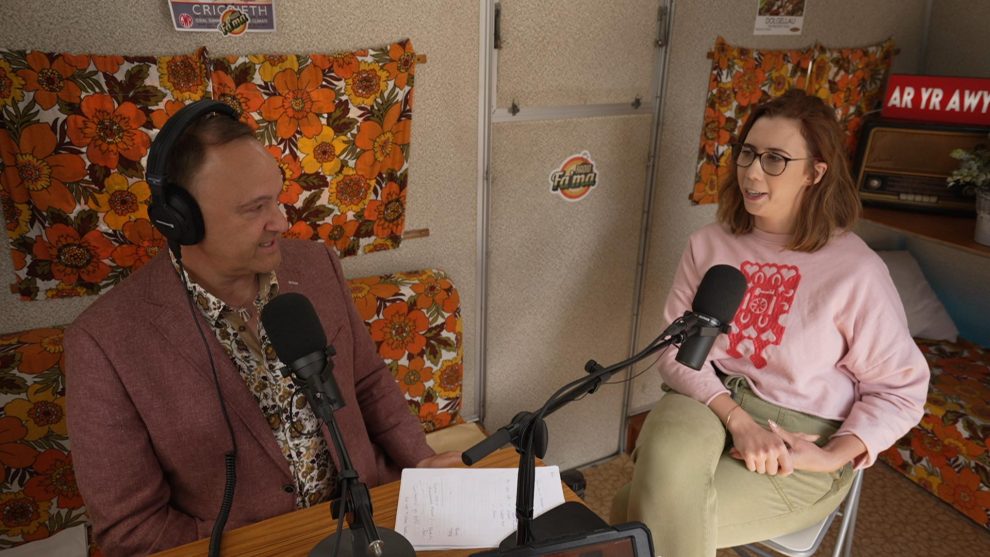 Alaw Llwyd Owen, 34, who comes from Llanddoged in the Conwy Valley and now lives in Denbigh, is campaigning to promote and raise awareness of the power and influence of the mind.

She has set up a digital platform, Nerth dy Ben (Your Strength of Mind), to help people tap into their own inner strength.

Alaw spoke movingly about the traumatic experience and her hopes for the future in her first in-depth broadcast interview on Radio Fa’ma, an S4C programme made by Caernarfon-based production company Cwmni Da.

It features in the final episode of the current series which was filmed in Ruthin and will be broadcast at 9pm on Tuesday, December 20.

Coincidentally, Alaw worked for Cwmni Da on their popular show, Fferm Ffactor, before joining the Welsh youth organisation, Urdd Gobaith Cymru, as one of their organisers, based in Bala.

Alaw was on her way home  from work in Bala when the crash happened on the A543 near Denbigh on October 2, 2018. She had to be cut free from her vehicle and suffered multiple injuries.

She accepts that life for her will never be the same again but instead of feeling sorry for herself she is looking forward and concentrating her efforts on what she can do rather than what she can’t.

During the conversation with Radio Fama presenters Tara Bethan and Kristopher Hughes, she said she doesn’t remember much at all about the accident.

“Thank goodness for that. The mind and the head are amazing in the way they protect you. I was in hospital for three months and in intensive care for five weeks. It was actually quite a safe period as I was under such special care although it was difficult and challenging for those around me. The challenges came when I came out of that bubble and had to start living again.

“I wasn’t walking, I broke both my feet and had to learn to walk on crutches to begin with and then sticks and a lot of physio. But the care in hospital and thereafter helped me to be strong to get me to the right place to heal,” said Alaw.

“We established Nerth Dy Ben when we realised that we have the ability to concentrate on our strengths and not on our weaknesses, and that it is something that we carry with us every day, sometimes without realising or acknowledging it.

“We all have a strength of mind, and Nerth dy Ben is a space to unite and encourage people to ignite those powers that we carry with us every day, and to own and concentrate on those elements which make us unique.

“It  is currently an online platform at  www.nerthdyben.cymru and on the website I have posted contributions from different people who talk about what they do to keep their mental strength strong. It gives people space to realize their strengths. It focuses on what people can do rather than what people can’t do.

“The accident turned my life upside down. Now I can’t do the things I used to do. But if I think about everything negatively then there is no point so we have to look forward. I’m still going and getting better.

“I have learned so much over the past three years and I wouldn’t be who I am without that experience because of the impact of the brain injury.

“But I am now ready to push the re-set button and start a new chapter in my life,” she said.

During the interview, Kris told Alaw: “You have certainly moved mountains. You are an influence on your community and have inspired others to use their strength of mind.”

Nerth dy Ben is also organising workshops in schools and youth groups and Alaw hopes these sessions, which make use of arts, will help young people realize what makes them unique as individuals, and to use those strengths in their day to day lives.

Radio Fa’ma producer Emyr Gruffydd said Radio Fa’ma is a chat show with a difference where the presenters, Tara and Kris, visit different areas throughout Wales.

Tara, originally from Llansannan, is an actress and singer and presenter of the ‘Dewr (Brave) podcast, while Kris is originally from Llanberis but has been living on Anglesey for many years. He is a druid, writer and is just as well-known as his drag queen alter ego, ‘Maggi Nogi’.

“They travel from place to place in a van towing a pop-up caravan which can be quickly and easily turned into a mobile radio station.

“Tara and Kristopher broadcast four live radio programmes which are each two hours long from each location and chatted with various people from the communities about experiences that have had an impact on their lives.

“The conversations are a mixture of the intense and the light-hearted and discuss all kinds of topics. As well as the conversations from the caravan there are portraits of the guests in their community, at work or at home, and each guest also has the opportunity to choose three songs that mean something special to them.

Before each broadcast radio sets were distributed around the area and during the songs we have the opportunity to get to know a little about each area, and their residents” he said.

In the programme from Ruthin Tara and Kristopher also discuss mental health issues with Rhian Jones who works with the DPJ Foundation locally.

Set up in Pembrokeshire in July 2016 following the death of Daniel Picton-Jones his wife Emma realised very quickly the lack of support that was available for those suffering with poor mental health in rural communities.

Also taking part in the programme are identical twins Menna and Morfudd Jones. Both have served terms as Ruthin’s Mayor –  Menna is the current incumbent.

Meanwhile, local solicitor Huw McKee will speak about his battle with bowel cancer after it was diagnosed in June last year.

Ellen Newcombe tells viewers about her work with the Dwylo Diogel group which offers carers of people who live with dementia the opportunity for some respite at their centres in Trefnant and Ruthin.

The guests also include Elen Lloyd, who tells Tara and Kris about her work as a holistic lifestyle coach while grass roots football is at the heart of the chat with Wyn Davies, who has been coaching youngsters at Ruthin for more than 25 years.

The programme from Ruthin featuring Alaw will be broadcast on S4C at 9m on Tuesday, December 20.  English subtitles will be available and the programme can also be watched later on S4C Clic, BBC iPlayer and other platforms.