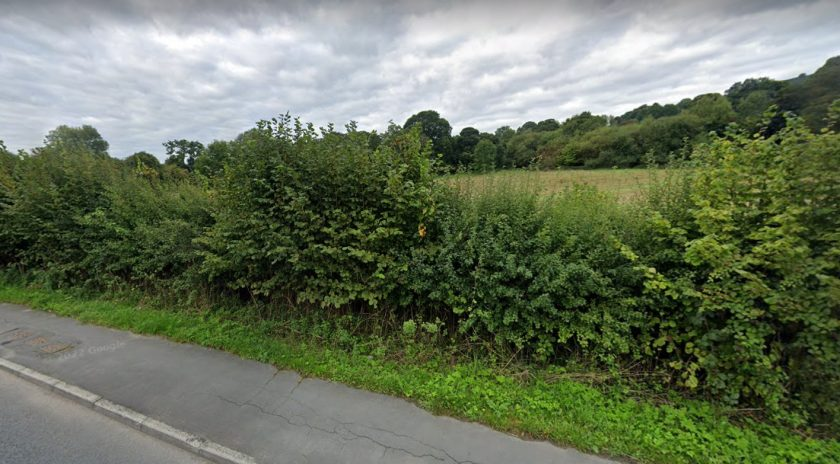 A proposal to build 70 homes on greenfield land near the Flintshire border with Wrexham has been submitted to Flintshire Council.

The authority’s planning department has received an application from Castle Green Homes to develop land known as the Bluebell Field off Wrexham Road in Abermorddu.

If granted, a mix of 37 three-bedroom properties and 12 four-bedroom detached homes would be made available on the open market.

The developers, through their agents Grimster Planning, say the scheme would help meet the market and affordable housing needs in the area.

But ward councillor for Caergwrle, Dave Healey (Lab) has expressed his concerns at the impact the development could have on the area in a pre-consultation exercise the developer has included with its application.

Cllr Healey raises fears the site may be at risk of flooding, there could be increased parking congestion at Abermorddu CP school, and says the stretch of Wrexham Road which runs alongside the site – linking Mold to Wrexham – would need to be dropped from 40mph to a
30mph speed limit.

He also believes the affordable homes would still be out of the price range for locals, calling for some of them to be gifted to Flintshire Council so the authority can rent them out, and has also asked for archaeological considerations to be made.

In his consultation feedback Cllr Healey said: “Some of the homes should be ‘gifted’ to the Local Authority so that they can be rented out to local people.

“The proposed ‘affordable’ homes would not be affordable to local people whatever the price.

“Abermorddu CP has an exceptional problem with regard to parking issues because a significant number of pupils come from Gwersyllt which is part of Wrexham.

“These pupils cannot walk to school: they have to be driven there and picked up. The double yellow lines now mean that parents park wherever they can – Wyndham Drive, Hawarden Road, or on the housing estate of Llys Clark. They currently cause numerous problems for local residents as a result of this.”

Cllr Healey added: “The point is that a new housing estate will be an absolute gift for these parents, several of whom will descend upon it in order to offload or pick up their children who will be able to walk to or from the school to their cars.

“This will cause considerable congestion at the entrance to the development and increase the risk of accidents occurring. Whilst this may not be the Achilles’ heel of the development it is extremely difficult to see how it can be resolved in any planning application.”

Responding to Cllr Healey’s observations in the pre-consultation exercise, Castle Green Homes said: “The site lies in Flood Zone A. It is therefore deemed by Natural Resources Wales to be at a low risk of surface water, groundwater, fluvial and tidal flooding, as confirmed in the accompanying Flood Consequences Strategy.

“The 30mph speed limit zone is to be extended as detailed in the Transport accompanying Statement. This will be confirmed as part of the Section 278 Agreement.

“The applicant will work with Welsh Water and the LLFA to ensure that an appropriate and effective drainage solution is put in place.

“Comments regarding the need for an Archaeological Watching Brief are noted. This will be a matter for the local planning authority.”

In a design and access statement the applicant seeks to calm concerns about increased traffic stating: “This proposed increase in traffic is not anticipated to have a material impact on the operation or safety of the local highway network.

“As such, there are no highway or transport related reasons to withhold planning permission for the proposed development. Furthermore, it is not considered that there is any requirement for any additional assessment of the local highway network.”

When Flintshire Council’s Local Development Plan, which includes the site, was previously discussed Cllr Healey and his wife, neighbouring Hope Cllr Gladys Healey (Lab) who sits on the planning committee, followed legal advice to declare personal and prejudicial interest and withdrew from discussions.

But in his feedback Cllr Healey says he may decide to ask the council’s Standards Committee for a dispensation so he can speak when the planning committee makes a decision on the application at a later date.

Don’t miss the deadline! Almost 5.7 million people yet to file their Self Assessment tax return
Circus and international crime fiction festival heading to Wales in 2023