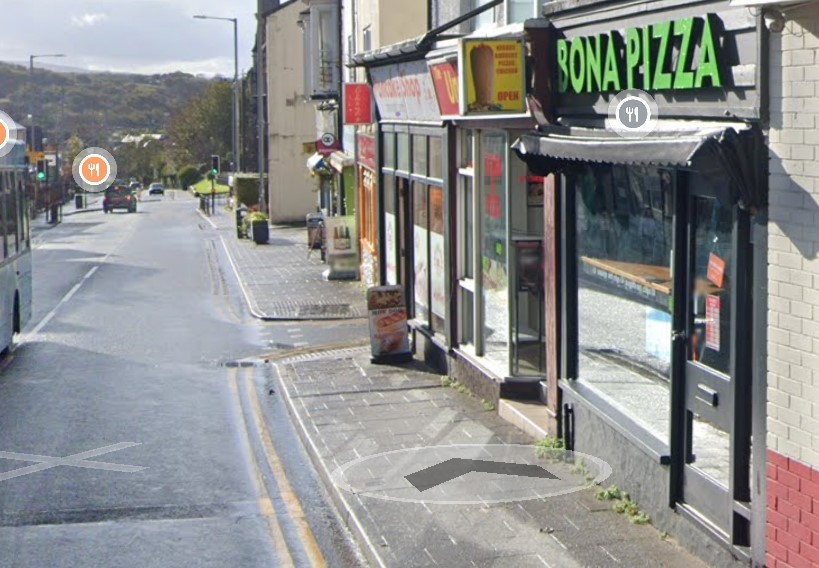 A BANGOR takeaway is applying for a premises licence to sell hot food into the early hours of the morning – despite objections over public safety, noise and nuisance.
The application by Bona Pizza on Holyhead Road, in Upper Bangor, has also attracted concerns over cooking odour.

Applicants Salim Hamdance and Kifl Sohl have applied for the licence to run the hot food outlet selling pizza, kebabs, burgers and chips.
The application will come before Cyngor Gwynedd’s central licensing sub-committee on Monday, January 23.
It is being made with regard to “provision of late night refreshment – indoors and outdoors.”

The council said ‘two’ letters have been received objecting to the application – although one is presented as a petition.
The council said it was unable to confirm how many names were included in the petition.
A spokesperson for Cyngor Gwynedd said that according to licensing regulations “a petition counts as ‘one response’ to a consultation – regardless of how many people have signed it”.
The petition objection relates to concerns specifically to public nuisance and public safety.

A single letter of objection has also been received from an individual who resides close to Britannia Square and objects on the grounds of “public nuisance”.
Their concerns are listed as “…specifically in relation to the increased noise late at night from patrons visiting the premises; as well as the odour nuisance from late night cooking smells.”

North Wales Police has also responded to the application and recommends that conditions are placed on the premises licence.
They include use of CCTV at the premises, covering all areas where customers will have access, with the exception of toilet areas.
The CCTV must also be provided to – and made available for – viewing when requested by North Wales Police and the licensing authority.
They also include that the premises must provide copies of the CCTV footage, which may be downloaded, recorded or sent via an online format when requested by North Wales Police and the licensing authority.
The council recommendation is that the licensing committee “consider the objections and approves the application” in accordance with the comments of the police, and requirements of the Licensing Act 2003.

The takeaway’s, opening hours are listed as Sunday, from 4pm – 2.30am, Monday, 4pm – 3am, Tuesday, 4pm – 2:30am, Wednesday, 4pm – 3am, Thursday, 4pm – 2:30am, Friday, 4pm – 3:30am and Saturday, 4pm – 3:30m.
Licensable activities, with regard to “late night refreshment, (indoors and outdoors)” are listed during the same hours.
The applicant has also supplied a list of mitigation measures, including the use of private licensed security, present from midnight until close of business.
Staff would not allow shouting, abusive, threatening behaviour within or near to the premises.
Police would also be called if any anti-social behaviour continues, following staff politely asking any people causing issues to refrain.
The applicant also states that they will have “operational systems and protocols” to keep the public safe – although, the council documents note that “no details have yet been provided beyond a general statement of intent”.
The applicants has also stated that “public safety is paramount” and extends this to staff, security personnel, the general public customers and anyone that could be affected.
Signage will also be provided to state that “CCTV is in operation”, the application states.

The business will also highlight that “antisocial behaviour will not be tolerated, and will be reported” and that “individuals causing a public nuisance will be banned”.
Other measures include not allowing children in the shop after 9pm “unless accompanied by a responsible adult”.

National Cheese Lovers Day: How to stop your cheese going off
Farm owners hope to capitalise on ‘work from home’ craze