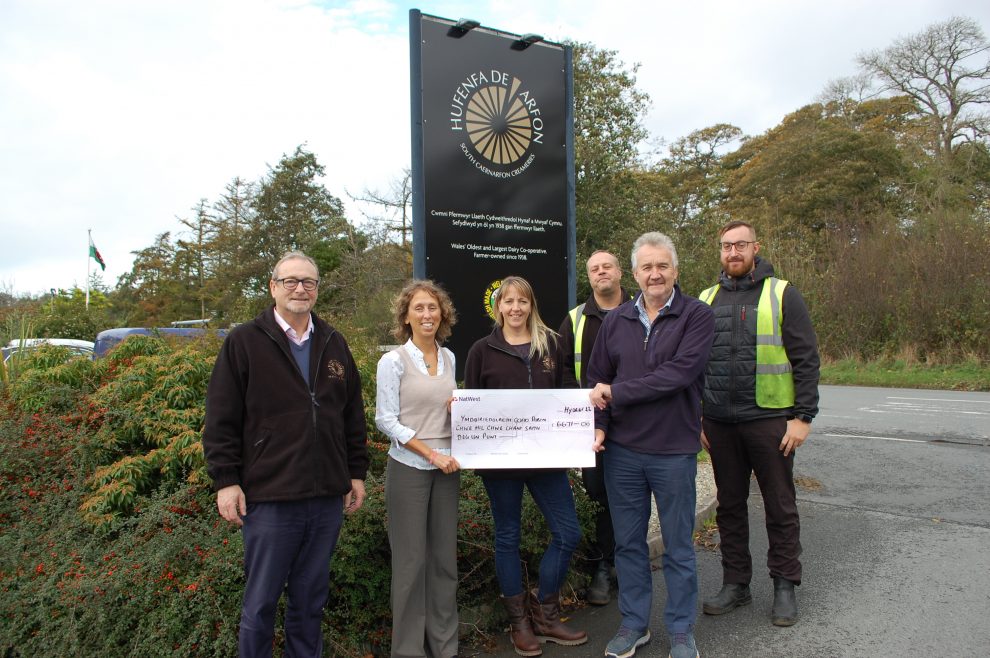 STAFF from a Gwynedd creamery braved wind, rain and mist to tackle Wales’s highest peak and raise a mountain of cash for two charities that are close to their hearts.

The intrepid walkers from South Caernarfon Creameries climbed Snowdon last month and raised over £8,000 in sponsorship with the company, Wales’s largest farmer-owned dairy co-operative, backing their efforts with a further £5,000.

The money was divided between Cofio Robin, which commemorates Robin Llyr Evans, who died tragically seven years ago in a fall at a newly-built sports stadium in Wuhan in China, and rural mental health charity The DPJ Foundation, with both receiving £6,671.

Robin, the son of former SCC Chief Executive Gareth Evans, was a keen and talented sportsman and the charity has helped young sportspeople from Gwynedd to the tune of over £40,000 since 2018.

Gareth Evans said: “It was a great effort by the team from South Caernarfon Creameries who have given us wonderful support in the years since we set up the charity to support young sportspeople from North West Wales.

“It can be difficult for them to achieve their potential because of the high costs of training and travelling to compete and over the years Cofio Robin has helped so many of them to achieve so much and we know that’s what Robin would have wanted.”

The DPJ Foundation was set up in 2016 to help people in rural Wales cope with the unique pressures that can arise in remote rural areas.

It commemorates young Pembrokeshire agricultural contractor Daniel Picton-Jones, a father of two, who took his own life after struggling with depression, and it has now helped over 650 people across rural Wales.

Kate Miles, Charity Manager for The DPJ Foundation, said: “The DPJ Foundation is extremely grateful for the backing of South Caernarfon Creameries, a business with its roots in the heart of rural Wales and a real appreciation of the support we provide for those that need it in the countryside.

“As well as our Mental Health Awareness training and our confidential Share the Load counselling and helpline service, we also post a daily picture on our social media channels which we hope will show that there is always help available and that even though farming can be isolated and lonely, you are never alone.

“While Snowdon is an iconic and beautiful mountain for all of us in Wales, farmers know better than anyone that it can be bleak and isolated up there as in other rural communities, especially at this time of year.

“Through their efforts and determination, the SCC staff who gave up their time to raise this amazing amount will be helping so many by allowing us to continue the vital work we do. We are so very grateful to them all, diolch o galon.”

There were over 25 that set off up the path on the nine-mile trek from Llanberis but they were still on the way up when Andy Goswell, Head of Cheese Operations and a keen runner, passed them on the way down as he completed the journey in little more than two hours.

Marketing Manager Kirstie Jones said: “We switched from a Saturday to a Sunday because of forecast high winds and stormy weather but in the event I didn’t even need all the warm and waterproof clothing I had brought.

“By the time we reached the top it had closed in but we enjoyed the day. It was great to get out together as a team and it was my first time to climb Snowdon.

“It brightened up as we got back down towards Llanberis and everyone was thrilled to be back unscathed and to have completed the challenge. Every step was worth the effort to raise so much for such fantastic causes.

“It was a great effort and with SCC also putting up an extra £5,000 the two charities were delighted and we also donated a hamper of cheese to The DPJ Foundation for another successful fund-raiser.”