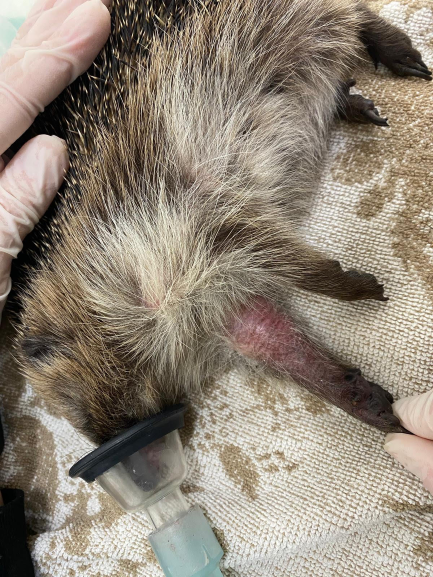 A WARNING has been issued about “indiscriminate and dangerous” rat traps after a hedgehog lost his life following a nasty run-in with a device in Denbigh.

Residents on Post Office Lane in the town were alarmed as – late one evening – they heard loud screams from outside which sounded like an animal in distress.

Unfortunately, despite a thorough search, they could not find an animal. However, the screams could again be heard the following day, and residents found a hedgehog caught in a rat trap among some overgrown grass.

Screams from the hog were so loud that the RSPCA call handler could hear them in the background when the call for help came in.

The hog’s leg had become caught in a clamp-like rat trap, and was “unbelievably swollen”. RSPCA inspector Phil Lewis collected the animal, and rushed him to the charity’s Stapeley Grange Wildlife Centre for urgent care on 7 June.

Sadly, despite the best efforts of wildlife rehabilitators, the hog had to be put to sleep due to the extent of his injuries and to prevent him suffering further.

RSPCA inspector Phil Lewis said: “This sad incident is a reminder that some  traps can pose a real hazard to non-target species – and this poor hedgehog’s leg was unbelievably swollen after getting caught in this ratchet-like device.

“Households on Post Office Lane in Denbigh could hear the poor hog screaming in pain – and our call handler, shockingly, overheard the screams in the background when this was reported to us.

“It seems likely this poor hedgehog was dragging himself along with his leg caught in the trap.

“Sadly, we know some traps can be indiscriminate and dangerous; and the injuries to this hog were so severe that despite the best efforts of our wildlife experts, he had to be put to sleep to avoid further suffering.

“We believe that humane deterrence and prevention is always better than traps wherever possible – and publish guidance on living with rats and mice and what people need to know about traps to mitigate animal welfare issues as much as possible.”