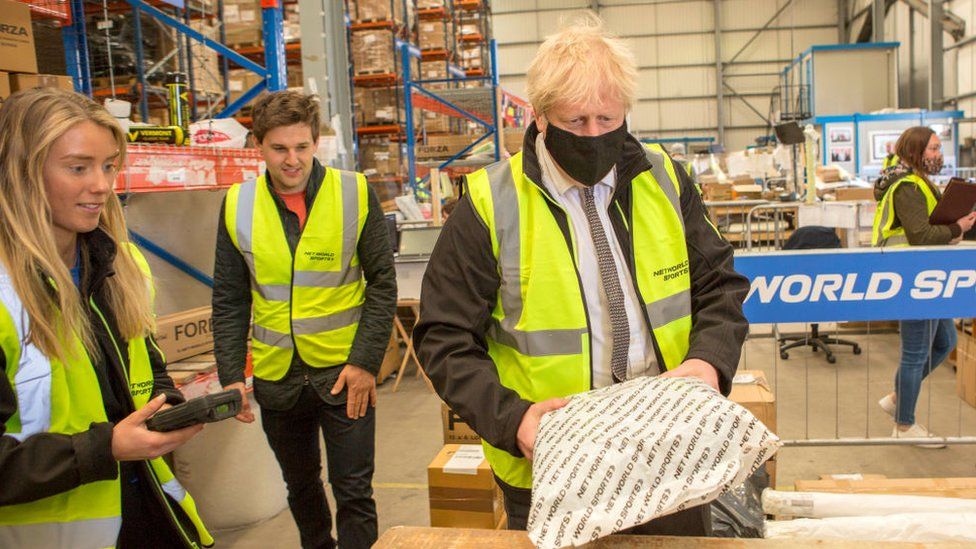 BORIS JOHNSON has denied saying that he would rather see bodies “pile high” than enter another Covid lockdown.

Asked if he made the comments controversially attributed to him, the prime minister said: “No, but I think the important thing I think people want us to get on and do as a government is to make sure that the lockdowns work.”

Speaking to reporters in Wrexham, he did not deny discussing using donations to fund a refurbishment of his Downing Street flat, however.

Asked if he had ever discussed using donors to pay for the work, Mr Johnson only said: “If there’s anything to be said about that, any declaration to be made, that will, of course, be made in due course.’’

The bodies comment is reported to have been made after a meeting with Michael Gove and other senior ministers, before the government imposed a second national lockdown.

The Labour leader said: “I think, like everybody reading that, I was astonished to see those words.

“It’s for the Prime Minister, I think, now, to make a public statement about that.

“If he did say those things then he’s got to explain it, if he didn’t, go on the record and publicly explain what was said and what wasn’t said.

“I think everybody will be deeply concerned, not least those all families that have lost someone during this pandemic.”

In response to Boris Johnson’s visit to Wales on Monday (Apr 26), a Welsh Labour Spokesperson said: “Boris Johnson has hopefully come to Wales to learn lessons from the fastest vaccine rollout combined with some of the lowest coronavirus rates in the UK, being delivered by the Welsh Labour Government.

“He should’ve taken the opportunity to apologise for his North Wales Tory MPs who have repeatedly undermined the collective effort to keep Wales safe. After that, he should’ve explained why the Tories in the Senedd have voted multiple times against measures to limit the spread of Coronavirus.

“People in Wales know the Tories never put the interests of Wales first. They have acted irresponsibly throughout the pandemic and are now consumed by Downing Street leaks and allegations about repugnant comments attributed to Boris Johnson in the media.

“Contrast the vacuum of moral leadership from Boris Johnson and the Tories, with Mark Drakeford’s cautious and compassionate leadership and it’s clear that why people across Wales are saying they will support Welsh Labour on 6th May.”

Welsh Labour have also called on Andrew RT Davies to stand up to his London boss Boris Johnson after multiple media outlets reported repugnant comments attributed to the PM.

Vaughan Gething, who has been responsible for the day to day handling of the NHS in the pandemic, slammed Boris Johnson’s comments arguing they “cause considerable distress to grieving families”.

Welsh Labour’s Deputy Leader Carolyn Harris called on Davies and every Tory candidate for the Senedd to disown the vile remarks.

The joint intervention by the pair comes as Johnson refused to apologise and dismissed ongoing allegations of Tory sleaze while on a campaign in north Wales.

Welsh Labour Health Minister Vaughan Gething said: “127,434 people across the UK have now died because of Covid. 127,434 families will forever have a loved one missing from their home. Boris Johnson should hang his head in shame.

“The Prime Minister’s unforgivable comments will cause considerable distress to grieving families, and will only be exacerbated if the Tories in Wales do what they’ve always done – follow their London leader.

“It beggars belief that the Tories can welcome him to Wales with open arms and then look voters in the eye and ask for their votes.”

“The Welsh Labour Government has taken a careful, cautious approach to the pandemic in order to save lives and it is frankly unbelievable that anyone – let alone a British Prime Minister – could be so callous and uncaring.

“It’s even more disturbing that the Prime Minister could visit north Wales after his comments were exposed and not take time to offer even the faintest of apologies.

“The Tory Senedd group leader must now immediately condemn the Prime Minister’s comments.  Indeed, every Tory candidate seeking votes should make it clear that Boris Johnson’s views are not welcome here in Wales.”