Home » Lakesiders kick on in new quest for European glory 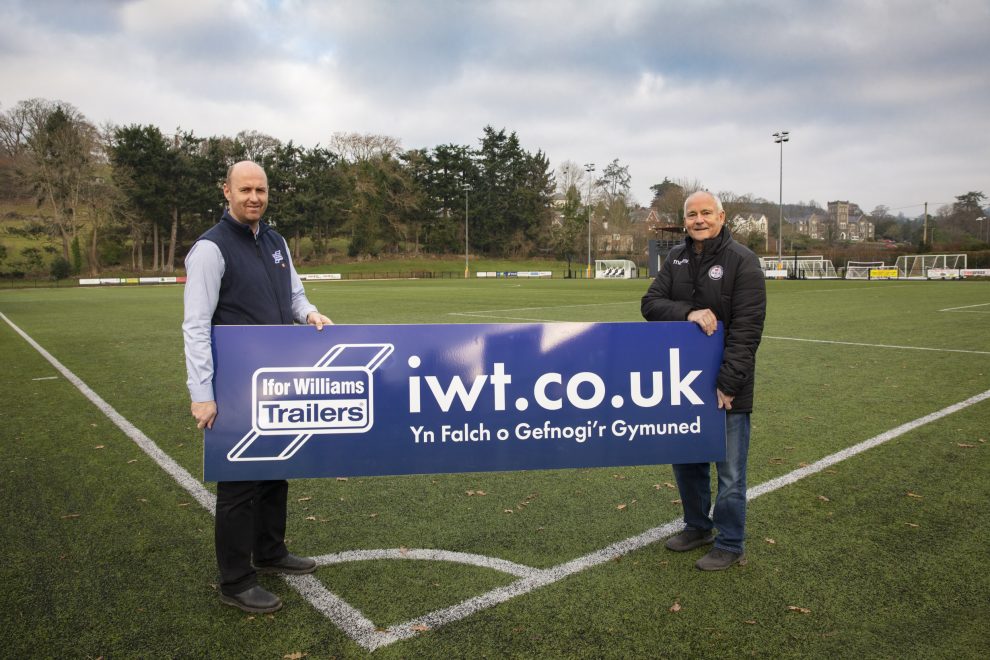 A COMMUNITY-BASED football club that “punches above its weight” is aiming for more European glory next season.

Established in 1880, Bala FC is one of the oldest clubs in Wales but its focus is firmly on the future.

The Lakesiders have qualified for the Europa League in seven of the past nine seasons.

But it will be more difficult next time because the number of Welsh Premier League clubs that can qualify is being reduced from four to three.

Supporting the Maes Tegid outfit all the way in their quest for European competition will be the continent’s biggest trailer maker.

Ifor Williams Trailers has long standing links with the club – and many of its employees have played for the Lakesiders.

The firm has once again renewed its backing this season and has just delivered a new advertising boarding to be displayed at the ground.

The trailer makers are also long-term sponsors of Wrexham AFC which has now been taken over by Hollywood A-listers Ryan and Reynolds and Rob McElhenney.

But they are also determined to stick by Bala FC which has come a long way since manager Colin Caton – cousin of the late Manchester City and Arsenal star, Tommy Caton – took over 19 years ago, after a successful semi-professional playing career with Rhyl, Colwyn Bay and Witton Albion.

Another constant is chief executive Nigel Aykroyd who was a tough-tackling midfielder in his younger days before taking the helm off the pitch.

Nigel said: “For a club our size, we are obviously punching above our weight when you consider the opposition we face as one of 12 teams in the Welsh Premier.

“Certainly, our population is much smaller than any of our competitors with just under 2,000 people living in Bala.

“We have played in Europe this year when we lost to Larne of Northern Ireland who have had significant investment from the directors of Purple Bricks and have gone fully professional but we put up a really good fight.

“The year before we beat Valletta in Malta away and we lost to Standard Liege who are a huge European club so we’ve had some brilliant experiences on the European stage.

“The European qualification is a significant financial benefit to us and that’s something that we’re striving for every year and it helps financially.”

Nigel is proud of the facilities at the Maes Tegid ground that’s been the club’s home since the early 1950s.

An investment of £550,000 funded by the Welsh FA in partnership with UEFA paid for a new all-weather 3G pitch.

It’s enabled the club to play a key role in developing grass roots football in the area.

Nigel added: “We also had a significant contribution from Gwynedd education authority because the schools have permanent use of our facility during school hours. All the schools in the area can use it at any time.

“We also run our eight academy teams from seven years of age up to 19, bringing in young players from a wide area of probably of 40 or 50 mile radius.

“The 3G pitch is used every single evening of every single day while weekends are completely full with academy games, first team fixtures and we also have a reserve team.

“We have an association with the Bala Junior FC which has six teams and they train here twice a week and play here on Saturday mornings.

“We also have a Community Development Officer who goes round all the schools in our catchment area, coaching and offering coaching facilities and he does that in conjunction with the schools.”

“My mantra is that sponsors like Ifor Williams Trailers are the lifeblood of our football club. Without them, we wouldn’t be in existence, it’s as simple as that. They’re hugely important to us.”

Llion Roberts, sales account manager with Ifor Williams Trailers, who lives just up the road in Llanuwchllyn, played for the club as a centre half.

He said: “I was here for six years and during my time we won the league and went up to the league they are in now.

“It’s a family club and I have four lads, Gwydion, Cynan, Lewis and Ifan, who play for the academy in different age groups.

“I am very proud that Ifor Williams Trailers are long term supporters of Bala FC.”

It was a sentiment endorsed by production site manager Gerallt Parry, who lives in nearby Llandderfel.