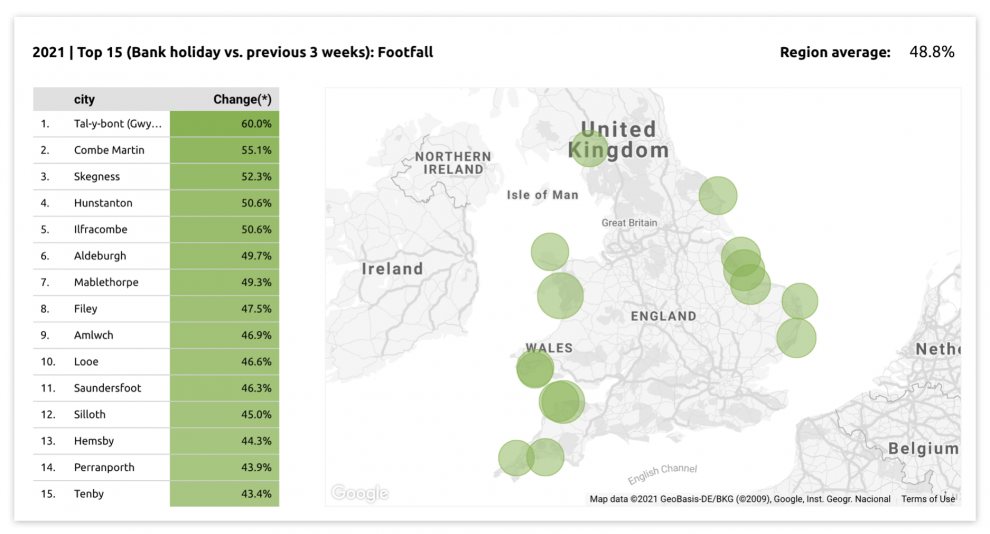 NEW analysis* has revealed that Tal-y-bont in Gwynedd, North Wales, was the coastal town that saw the biggest increase in visits and footfall during the sunshine of the Spring Bank Holiday weekend – a rise of 60% compared to the three previous weeks.

The data also identified that Skegness on the Lincolnshire coast seems to have benefitted from investment and interest this year: it saw a 52% rise in visits this past weekend, putting it in third place this year, compared to not making the top 15 risers at all in 2019.

Six East Coast resorts and four Welsh coastal towns were in the top 15, but no towns from the South East made the list, suggesting that travellers from London and the Home Counties looked further afield for their beach excursions now that they can travel again.

Across England and Wales, the average increase in visits to coastal resorts and beaches for the 2021 Spring Bank Holiday was up almost 49% compared to the three weeks beforehand – a rise of almost half again. This compares to just 19% for the same Bank Holiday in 2019 (in 2020 the UK was still locked down) suggesting that the UK’s coastal resorts have benefitted from overseas travel restrictions. In 2019 resort towns in the South East like Jaywick and Clacton-on-Sea saw rises in visits over the Spring Bank Holiday of 38% and 16% respectively, but don’t make an appearance in this year’s list.

The research was carried out by Huq Industries, a mobility research business, using its Community Vision product, for use by local councils to support decision-making around the future of our cities, towns and high streets.

Huq’s extensive dataset of real-time population mobility data, comprised of 1bn+ mobile geo-location data-points daily, is used by retailers, investors and the public sector to measure footfall across a range of consumer, business and industrial settings.

The top 15 coastal towns for increases in visits and footfall over the Spring Bank Holiday were:

Conrad Poulson, chief executive officer at Huq Industries, comments: “Towns in Wales, the North East and the South West dominate the ranking of resorts seeing the largest rise in visitors over the 2021 Spring Bank Holiday weekend. The lessening of travel restrictions combined with this year’s first really warm weather has resulted in a huge surge in trips to the seaside.

“A number of the towns in the top 15 are smaller places, like Amlwch in Anglesey and Looe in Cornwall, which also suggests many holidaymakers were being thoughtful about their long weekend trips and choosing destinations off the beaten track.”

* The data represents a unique daily count of Huq’s GB mobile panellists observed across coastal towns and places during the three weeks prior to the second Spring Bank Holiday weekend on May 29th, and the time elapsed. The value provided is the percentage change between the observation periods, which are aggregated at the city and region levels.