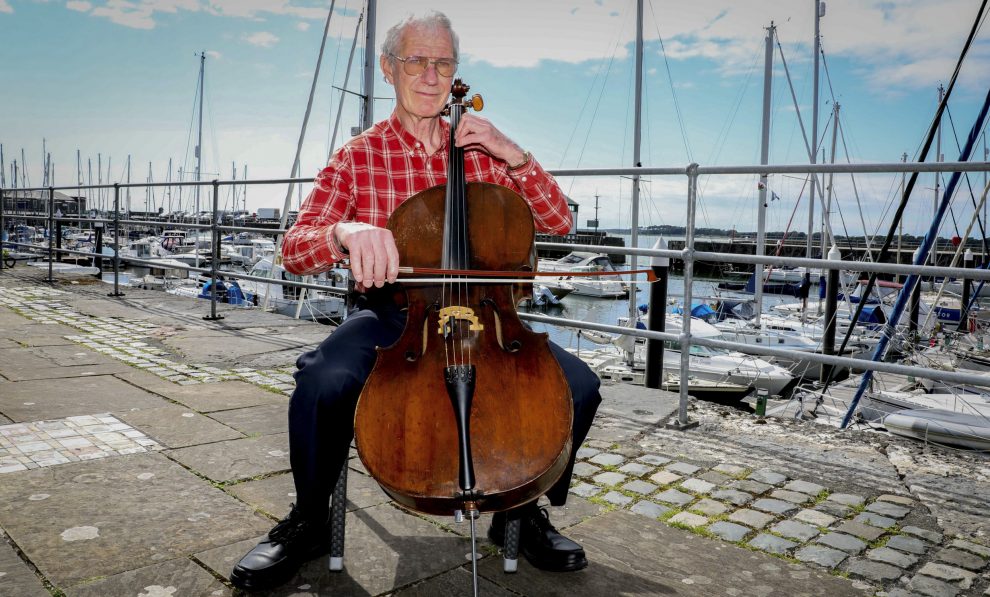 A MUSICAL pensioner has added another string to his bow by passing his grade 8 cello exam at the age of 74.

Desmond Burton gave up the instrument as a child but decided to pick it up again half a century later after retiring from his job as an English language tutor at Bangor University.

He passed the highest possible grade with the Associated Board of the Royal Schools of Music with flying colours, earning compliments from the examiner who said it was a privilege to listen to him playing.

His rediscovered talent with the bow has led him to join the Caernarfon Community Orchestra which was established by Canolfan Gerdd William Mathias to encourage music making amongst adults with any level of experience on their instrument.

The centre provides high quality instrumental and voice lessons to hundreds of people on a range of instruments, as well as organising a variety of community events throughout Wales.

While the majority of the students are of school age, Desmond is one of over 50 adult learners who attend weekly lessons at either Galeri Caernarfon or their satellite centres in Denbigh and Pwllglas, near Ruthin.

Desmond has also been able to play in chamber ensembles organised by the music centre.

Encouraged by his daughter Carolyn, a talented violinist, they enjoy informal music sessions with his guitar-playing wife, Porjai, at their home in Menai Bridge.

He said: “Many people think I’m mad taking these exams, why should I put this extra stress on myself but you don’t have to do. Many people who have joined the orchestra at the Canolfan Gerdd William Mathias do so just to enjoy themselves making music.

“I’m quite competitive and I love to set myself a challenge and in taking an exam you learn to play pieces to a very high standard and that’s what I wanted to do.”

Desmond, originally from Lichfield in Staffordshire, had cello lessons at school as a teenager but did not take any exams at that stage. The instrument his father bought for him from a member of the City of Birmingham Symphony Orchestra when he was 12 or 13 lay idle to gather dust and was not played for more than 50 years.

He added: “When I retired from Bangor University seven years ago, I had more time to take up something and it seemed appropriate to take cello lessons. I never took it very seriously as a child, so I thought I should come back and try a bit harder.

“Musical instruments are not cheap and I already had a cello. It is quite a good cello, an early nineteenth century instrument from Germany and I’m still playing it. I’ve had to put new strings on it and buy a new bow because it had been idle for so many years but it’s still a very good cello, I’ve no intention of changing it.

“Nicki is a brilliant teacher. She is so patient and is quickly able to sort out any problems I might have. She is inspirational. I would not have been able to pass the exams without her. It’s as much her Grade 8 as mine,” he added.

Desmond’s daughter Carolyn, who studied music at Birmingham University and now works for the City of Birmingham Symphony Orchestra, said words could not describe how proud she was of her Dad.

She said: “I was very supportive when he picked up the cello again after he retired. He really loves playing the cello and I’ve been happy to help him in preparing for the various exams he has taken.”

“I’m very proud that he has passed so many and reached the highest grade. I hope this will inspire others to take up a musical instrument whatever their age,” she added.

Tutor Nicki said: “Desmond is such a delight to teach. He comes to his weekly lessons and he’s always prepared. Even if there’s something tricky, he’ll always put himself to it and he’s an inspiration.

“Examiners don’t always write extra comments on their reports but on Desmond’s report there was a comment that said it was a genuine privilege to listen to him playing.

“He just goes to show that it doesn’t matter at what point in life you do things like these exams, you can do them.

She added: “We’re now actively looking for more members for the community orchestra. It is a great way for adults who have maybe not touched their instruments for years to pick it up again and have a go in a friendly and supportive environment,” she added.

“The lockdown caused the doors to close for a while and forced us into other ways of working, mostly online, but things have restarted in earnest now and it is great to see the full orchestra back in rehearsal. Anyone can join no matter their experience and the emphasis is very much on enjoying making music.”