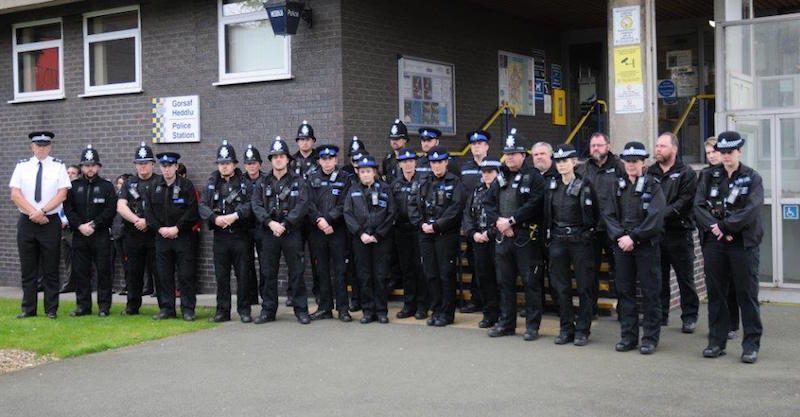 TWO North Wales officers who tackled an armed man who had forced his way into the home of a woman he had earlier allegedly sexually assaulted have won a National Police Bravery Award for their region.

PCs Richard Shea and Matt Reynolds, who retired in June after 30 years’ service, have already been presented with their Force’s Fletcher Award which is presented annually to an officer or officers who have shown outstanding bravery.

The two-armed response vehicle (ARV) officers were called to an address in Llandudno Junction in June last year following reports that a man armed with a gun was forcing his way into a property after previously attacking a woman there earlier that night while young children were at the address. Multiple calls to the police suggested he was armed with a machine gun although this was then reported to possibly be a BB gun.

“The risk was still considered to be very high, given the fact that he was armed, he was a risk to the victim, there were children in the house and there were members of the public nearby,” Mark Jones, secretary of North Wales Police Federation which nominated the two officers for the award, explained.

“These officers headed straight to the scene as any delay could cause loss of life and I am sure their brave actions and the fact they put themselves in harm’s way prevented someone being seriously injured or killed.”

On arrival at the scene, PC Shea, who has been with the Force for six years, took the lead and moved towards the property. As he neared the front door, he saw what was clearly a plastic barrel protrude from the doorway.

He made a split-second life or death decision and, had he not received further information that the subject was possibly armed with a BB gun and the lighting had not been so favourable, he would have shot the man.

But when PC Shea told him to show his hands, the man ran back into the property. PC Reynolds discharged his Taser, but it was ineffective as the man attempted to slam the door shut.  Having prevented the door closing, PC Reynolds struggled with the man who could be seen through the frosted glass.

PC Shea helped keep the door open and was able to discharge his Taser in the direction of the man, causing him to slump behind the door.  A large kitchen knife was then found next to him.  The two officers arrested him and removed him from the property.

Their supervisor, PS Tash Doran-Jones, said afterwards: “They were faced with a challenging report of a male who was suspected of having sexually assaulted a female prior to the call, back at her address trying to force his way in, armed with a gun. “I feel that their bravery, decision-making and threat assessment on the night not only prevented the female victim and members of the public from being hurt but also avoided harm to the subject.”

John Apter, national chair of the Police Federation, said: “We are incredibly proud of all the nominees from across England and Wales. The actions of these courageous officers provide a small snapshot of the amazing work our colleagues carry out day in and day out.

“These officers faced every firearms officer’s worst nightmare – a split second decision over whether to shoot a suspect who was pointing a firearm at them. Despite the pressure they were under, their quick thinking and willingness to run towards danger meant that order could be restored to a terrified community without the loss of life. They should be incredibly proud, as we are, of their actions.”

The Welsh revealed as the UK's most avid music listeners