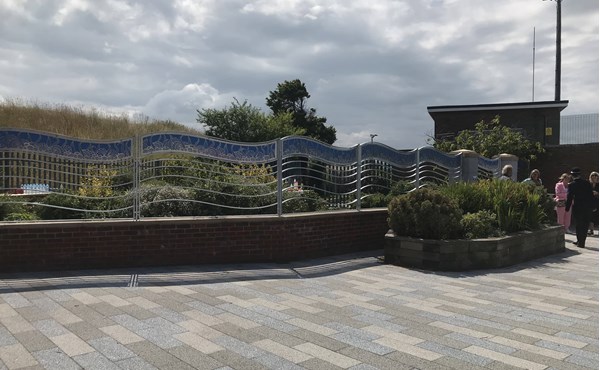 A CELEBRATION of achievements has been held to recognise the end of the Safer Streets Project in Rhyl and the opening of the new community food garden.

The Safer Streets fund was fund made available to Police and Crime Commissioners in England and Wales in 2020/21 to reduce crime, make residents safer and to reduce demand on the police. In July 2020 it was announced that two bids by North Wales Police were successful and the project in Rhyl West was awarded £517,000.

North Wales Police, Denbighshire Council, Clwyd Alyn and the Office of the Police and Crime Commissioner worked in partnership along with community champions who had their say on how the funding was used.

The funding was used for:

Further to this, funding was also used for environmental work in the area. Consultation with the community resulted in funding being used for:

To recognise the end of the project, an event was held at the new community garden to celebrate the achievements over the last year and to thank everyone involved. The garden was officially opened and formally handed over to local community champions who will now manage and maintain the space, including areas to grow fruit and vegetable plants.

Commendations were also awarded to attendees for their hard work and dedication to the project.

Superintendent Helen Corcoran said: “We were fortunate to receive over half a million pounds to help to reduce acquisitive crime and make a real difference for our communities here in Rhyl West.

“We’ve been able to install 16 CCTV cameras, four ANPR cameras and been involved in a number of community projects as well. We’ve also been able to install further security measures to make residents’ homes safer and more secure, preventing them from being vulnerable to burglary.

“It’s a tremendous achievement and a real celebration of how partner agencies and communities can work together to make that real difference for our communities. I’d like to thank everybody that has been involved in the project over the last 12 months”.

The community garden is now open and can be found on Wellington Road, near the entrance to Marine Lake in Rhyl.

Investigators ‘confident’ that fishing boat will be found