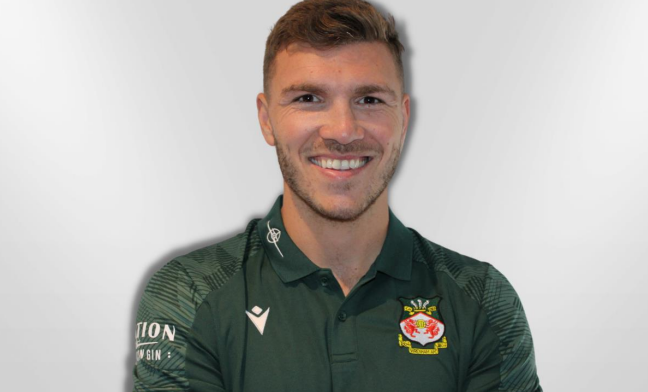 WREXHAM AFC has announced the signing of centre-back Jordan Tunnicliffe, 28, who becomes the Club’s first new addition ahead of the 2022/23 season.

The former Crawley Town defender has signed a two-year deal at the Racecourse Ground until the end of the 2023/24 season, following the expiration of his Crawley contract, after three years with the Red Devils.

On signing for Wrexham, the defender said: “I’m really excited – the ambition of the Club, the size of the Club, I’m just raring to get going.

“I’ve spoken to the gaffer, and he’s outlined what he wants to do this season and I completely agree with him. It’s a very, very tough league but if we stick to the essentials we can achieve those ambitions.

“The fanbase attracted me first and foremost. I spoke to the manager and when he told me his ideas I wanted to come straight away. I don’t intend staying in the National League for long, I want to help the team get promoted and it will be a full squad effort to earn that.”

Tunnicliffe leaves Crawley having made more than 100 appearances across his three seasons in West Sussex.

He was named in the EFL League Two Team of the Year in 2020/21, alongside new Wrexham team-mate Paul Mullin, and recovered from injury to make 18 appearances last season to help Crawley secure back-to-back top-half finishes.

He previously spent two seasons in the National League with AFC Fylde, helping the Coasters earn consecutive play-off finishes and win the FA Trophy at Wembley Stadium in 2019.

On his addition, Wrexham manager Phil Parkinson said: “I’m pleased to bring Jordan in to the Club. I think he’s a strong signing for us with a lot of EFL experience; he’s a good addition.

“It’s the first signing in, and we’re working away on several situations. As I’ve said all along, the aim is to make the squad stronger than it was last season but as everybody knows, the base and platform we’re starting from is a lot further along than it was 12 months ago.

“We just gradually want to piece it together. There’s quite a bit of time before the season starts yet and hopefully we’ll get the squad that will give us a really, really good season.”