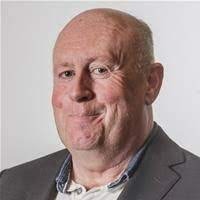 A BY-ELECTION will be held as a Wrexham Councillor has stood down for health reasons.

Plaid Cymru’s Smithfield Cllr Paul Williams has stepped down eight months after triumphing at last year’s local authority polls, and the party has moved swiftly to put forward a replacement candidate for election.
Wrexham Council has confirmed the election will take place as soon as possible, but a date has yet to be set.

The authority’s chief executive, Ian Bancroft, said: “We have received the resignation of Councillor Paul Williams who represents Smithfield ward.
“As a result, arrangements will now be put in place to carry out a by-election as soon as is practically possible.”

Smithfield has been somewhat of a swing seat in recent elections after being held for nearly 10 years by Plaid Cymru’s Keith Gregory when he announced his intention to step down ahead of the 2017 election, also for health reasons.
Welsh Labour’s Adrienne Jeorrett won the seat at that election in which Cllr Williams was also a candidate, but she also stood down ahead of last year’s election which Cllr Williams went on to wrestle back for Plaid with 41 per cent of the vote.
He achieved seven per cent more votes than the runner-up in the ward, Labour’s Patricia Williams, in a contest in which there was a 25 per cent turn-out.
The 2022 election saw Plaid Cymru triple its number of representatives at the Guildhall to nine.

Grosvenor Cllr Marc Jones, leader of the Plaid group in Wrexham, has confirmed he will take on the concerns of Smithfield constituents in the meantime, and has announced the party’s candidate to stand in the ward.
He said: “I’m sorry to hear that Paul is standing down and wish him well for the future.

“There will be a by-election in Smithfield to elect Paul’s successor and, until then, any local constituent can raise concerns with me as his group leader by contacting [email protected] or on 07747 792441.”
Cllr Jones added: “It’s important that Smithfield residents have a voice in the Guildhall and that’s why Plaid Cymru has moved forward to select a new candidate.

“We’re delighted to announce that we’ve selected Jon Jolley, who lives in Albert Street in the heart of the ward, to represent us.
“Jon has lived in the area all his life and is raising his young family in Smithfield. He is a campaigner who’s passionate about social justice and fairness for all. Jon will speak up for the people of Smithfield and I’m delighted to have him on board.”
Other parties are expected to confirm their candidates in due course.