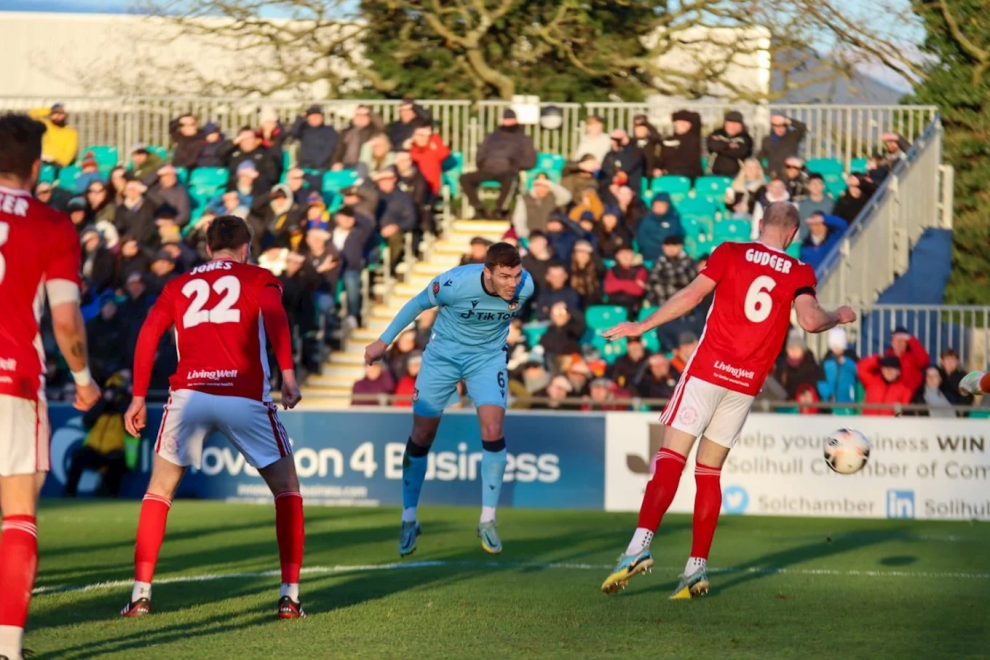 Tunnicliffe headed Wrexham into a half-time lead and O’Connor doubled the advantage after the break, with Mark Howard’s unfortunate late own goal not enough to deny the visitors all three points.

It meant a festive double over Solihull, and a first win at the ARMCO Arena since 2017 as Wrexham move to within two points of Vanarama National League leaders Notts County.

Manager Phil Parkinson named an unchanged team to the one which beat the Moors 5-0 on Boxing Day.

Solihull had the first sight at goal, with Justin Donowa dragging a right-footed effort wide with just a minute on the clock.

But Wrexham were in front in the 12th minute, with Elliot Lee dancing down the right hand side and floating a perfect cross to the back post for Tunnicliffe to head in his first goal for the Club.

Wrexham enjoyed a spell of attacking possession after the goal, without being able to make it count, but the momentum was halted by injury to Jacob Mendy.

With Mendy off receiving treatment, Andrew Dallas headed goalwards from the centre of the box but Howard parried clear on 21 minutes.

Callum McFadzean replaced Mendy for the subsequent corner, from which Callum Howe headed goalwards but Howard once again was equal to it.

Ryan Barnett was next to test Howard, racing onto a long ball over the top and shooting across goal, but the Wrexham keeper again parried clear.

Wrexham nearly doubled their advantage with three minutes of the half remaining though, when Lee and Mullin combined for the former to shoot low, only for Howe to slide in and deflect it wide.

Lee was the architect as Luke Young had an early sight at goal three minutes into the second-half, skipping inside and feeding Mullin, who teed the shot up, but the captain shot wildly over.

Moments later, Mullin slipped the ball through to Ollie Palmer on the left, but the striker’s shot lacked the power to beat Ryan Boot.

At the other end, after a free-kick failed to beat the Wrexham wall in the 51st minute Josh Kelly shifted the ball onto his left-foot and shot low but Howard saved and held.

The visitors’ were starting to pile the pressure on, however, and both Mullin from the edge of the box and Lee inside the area had shots well blocked as the hour-mark ticked closer.

The pressure told on 65 minutes, however, when Tom O’Connor curled a sumptuous free-kick over the bar and into the top corner from 20 yards when Mullin was fouled on the edge.

O’Connor had another free-kick chance in the 71st minute, but the Irishman this time curled well over from the opposite side of the area.

Boot then beat 20-yard effort clear on 73 minutes, before Luke Young could only fire back at the keeper from the rebound.

Solihull did pull one back inside the first of three minutes added on, however – a low cross deflecting in off Mark Howard at the near post.

But the goal was too little, too late as Wrexham withstood some late aerial pressure to claim all three points and kick off 2023 with a win.