Home » Stephen is a true “superstar” of social care 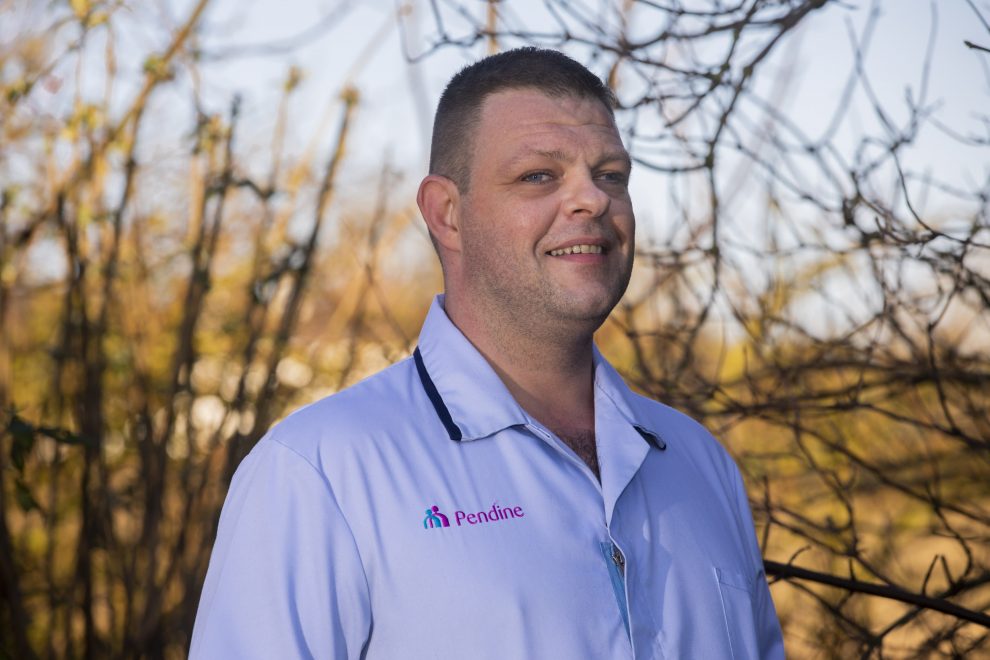 CARE HOME champion Stephen Parker has spent a lifetime conquering dyslexia and is about to celebrate his 21st year working in social care.

The 41-year-old is much loved by residents and colleagues at the Pendine Park care organisation, Wrexham.

According to Tracey Cuthill, the manager of Pendine’s Penybryn home which specialises in care for people with brain injuries and neurological problems, he’s a shining example of someone who has overcome personal obstacles to achieve a successful career.

She said Stephen has a genuine affinity with residents: “He’s one of the hardest workers I know. He puts his heart and soul into his job. Despite his dyslexia he jumps at every chance to undertake extra training.

“He has NVQ qualifications in a range of specialist fields. He’s a true champion, his perseverance is not just a credit to himself, but his knowledge and enthusiasm is a big plus for our Penybryn team. We can rely on his skills to help in so many day to day situations.”

Stephen, who lives in Wrexham, joined Pendine Park eight years ago from another care home in the town.

He said: “I’ll be forever grateful I found my niche in social care. I love my job. There’s nothing else I’d rather do.”

He said: “I was doing OK but I yearned for more job satisfaction.

“I started as a carer on February 1, 2001 – it’s etched in my memory as the day my life completely changed around. I knew from the off this was what I was meant to do. I love the work – in fact it’s not work, to me it’s a privilege, rewarding in so many ways, it’s hard to describe.”

At Pendine Park, he started at Care Practitioner level but has now advanced to Clinical Care Practitioner with responsibility for helping nursing staff with medication procedures, as well as specialising in continence protocol.

Stephen does busy 12 hour shifts four days a week and a shorter shift on Wednesdays.

He always aims to arrive at work earlier than his 8am start time to chat with departing night staff and familiarise himself with any issues.

Each day begins with a handover, crucial to maintaining care consistency. Speaking with night shift colleagues and checking notes is essential to ensure residents’ needs are never missed. Even small changes in mood or general wellbeing are noted as these can influence the type of support they may need for the day ahead.

Stephen said: “We all have ups and downs and our residents are no different. It’s important for us to be aware if a resident had a bad night’s sleep for instance as that can affect subsequent behaviour patterns.”

After hand-over carers are informed by Tracey of tasks for the day and given any information such as whether a resident is due to a hospital visit.

Stephen has achieved a pharmacy certificate among his NVQ qualifications which means he is able to help nurses on medication rounds.

Breakfasts are served either in the dining room or to residents in their rooms. After this the team helps clear the breakfast area. Stephen will also help nurses with any residents who receive nutrition via a ‘peg’ feeding system, a tube inserted through the abdominal wall.

After breakfast carers help with morning enrichment activities including handicrafts, dance and music sessions, story-telling, film shows, bingo, or other games. Some residents simply relax in their rooms or watch TV.

Providing entertainment during pandemic restrictions has been challenging as outside visitors such as schools, choirs or drama societies are unable to visit. So much of the entertainment has fallen on the shoulders of carers and enrichment activities leaders.

Stephen said: “Because families and friends were at times unable to visit, we’ve also spent time helping residents chat to or see loved ones via virtual technology. Sometimes just getting out our mobile phones and letting them see family members on the screen has been a huge morale booster.”

He said the pandemic has taken its toll on the whole social care sector: “Emotionally it’s been overwhelming. But there’s a determination to get through, to go the extra mile, to support each other 100 per cent.

“Yes one of us might need ten minutes out occasionally after an especially difficult period, but the rest are always here to take over their tasks until they regain momentum. Our camaraderie is second to none.”

Carers take breaks and lunch periods in rotation to maintain a full complement of team members on each of the three floors at Penybryn.

After morning activities, it is time for lunch and any further medication rounds.

Again, carers help clear away before supervising afternoon activities, assisting residents with individual hobbies, or further entertainments. If residents prefer to rest or nap, carers make sure they are comfortable.

Stephen said: “Providing a sense of companionship is an important part of our job. We’re always aware we’re working in their home and we respect their right to feel comfortable and independent in that personal space. If they feel like a chat we try to be here for them but if they just want quiet time we appreciate that too.”

Between main meals the team also assist with any snacks or hot drinks.

Later residents will often be found relaxing in their rooms or socialising in communal lounges. If they have mobility issues, Stephen will help them transfer between the different spaces.

The day’s final meal is tea, but there is also a later supper facility if residents want it.

“Towards 8pm, the end of our shift, we always do a final check on each resident,” said Stephen. “We never sign off without saying farewell for the night. We start at opposite ends of a corridor and pop into each resident’s room, deal with last minute requests and say goodnight.”

Even out of work Stephen rarely stops thinking about residents’ welfare. He often sources little treats for them if he stops at a shop or sees something he thinks they might like.

Tracey said: “Some mornings he comes in with arms full of treats. He’s extraordinarily kind and thoughtful, such a generous spirit. All our residents love him and their faces will brighten up on seeing him.”

One Penybryn resident of three years Andrew Jackson, echoed her sentiments, describing Stephen as a hero: “He is wonderful, caring and understanding, a superstar.”

Everyone’s a winner – football match breaks down barriers
How do you fancy a designer outfit for the cost of a garment from Primark?