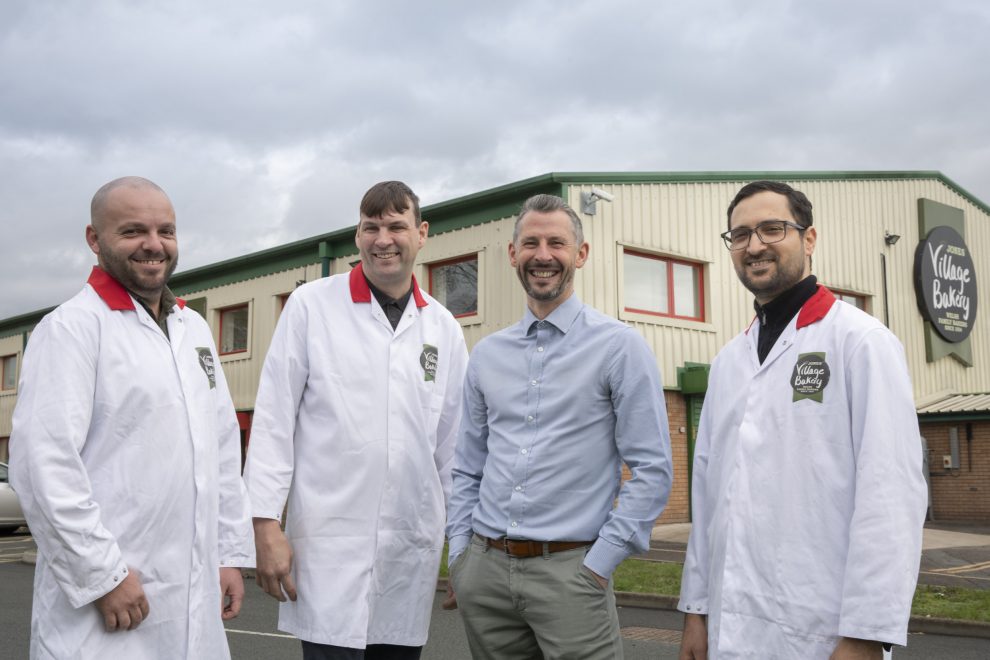 A FORMER credit risk analyser who was looking for a career change is among a trio of new managers at a fast-growing bakery that’s creating 40 new jobs .

Paul Durkin, 32, tried a string of “boring” office-based jobs but could never find anything he enjoyed doing – until he started work at the Jones Village Bakery in Wrexham.

He landed a role as a production operative and after rising through the ranks he’s been appointed as the manager of the company’s pancake bakery on the town’s industrial.

The two other new managers are Bilel Mejbri, known universally as Billy, who’s now in charge of the bagel bakery, and Mike Bennion, who’s been promoted to run the scone bakery.

The three are the latest bakery bosses to come off the production line at the family firm which prides itself on its “grow-your-own” policy in developing staff.

As a result, the vast majority of their supervisors and managers originally started out on the ground floor.

The bakery is planning to recruit another 40 staff for an extra shift on the new £16 million production line that makes a range of sourdough bread.

As well as offering a range of tasty perks, including supermarket discounts up to six per cent, the company is a Real Living Wage employer with rates starting £10.90 and hour.

After leaving college, Paul spent years going from job to job, including spells with a website design company and as a credit risk analyst with the Bank of America, before looking for a more “hands-on” role.

He said: “Originally, I came here just because there was a job available but I really like it here and 13 years later I’m still loving it.

“The Village Bakery has always been a good place to work, I get on well with everybody and it’s a great company to work for.

“I started on the bottom rung of the ladder as a production operative, then I became a shift supervisor before being made a shift manager.

“Now I have been made the manager of the bakery making pancakes and I am very proud of what I have achieved.

“It’s nice to work somewhere where your efforts are recognised and rewarded. If you work you are given the chance to progress.

“I’m not just saying this but we make the best of everything that we bake – the bread, the scones, the pancakes, the bagels, the crumpets the pies and sausage rolls – which I think are a million times better than those made by our competitors. Everything is the best you can buy.

“I have a real sense of pride working here and you are praised when you do well. The people who work here are valued.”

Meanwhile, Billy Mejbri started at the Village Bakery 11 years ago and hasn’t looked back

He said: “It’s a pleasure to work for the Village Bakery and it’s in their DNA to invest in their staff and help them develop and achieve their potential.

“By starting out on the ground floor, you learn every aspect of the job and if you work hard you get your rewards.”

There was a similar message from Mike Bennion who was thrilled to be put in charge of making scones,

Mike said: “Scones are a signature product for the Village Bakery so this is big vote of confidence. It’s also a massive responsibility but one that I relish.

“In my opinion they are the best scones on the market so I am really proud to work here.”

He said: “Paul, Billy and Mike all thoroughly deserve their promotions to become bakery managers.

“All three of them have been with us for many years and this is a just reward for their hard work and commitment.

“They’ve all got different backgrounds but ultimately they’re all great advocates of what we do at Village and they will help lay the foundations for future growth and development.

“They are role models who will now help us identify the next generation of talent in their teams so they can be given support and training to become our future supervisors and managers.

“As Paul, Billy and Mike have demonstrated, the sky’s the limit for people who have a great work ethic and are passionate about making great products.”