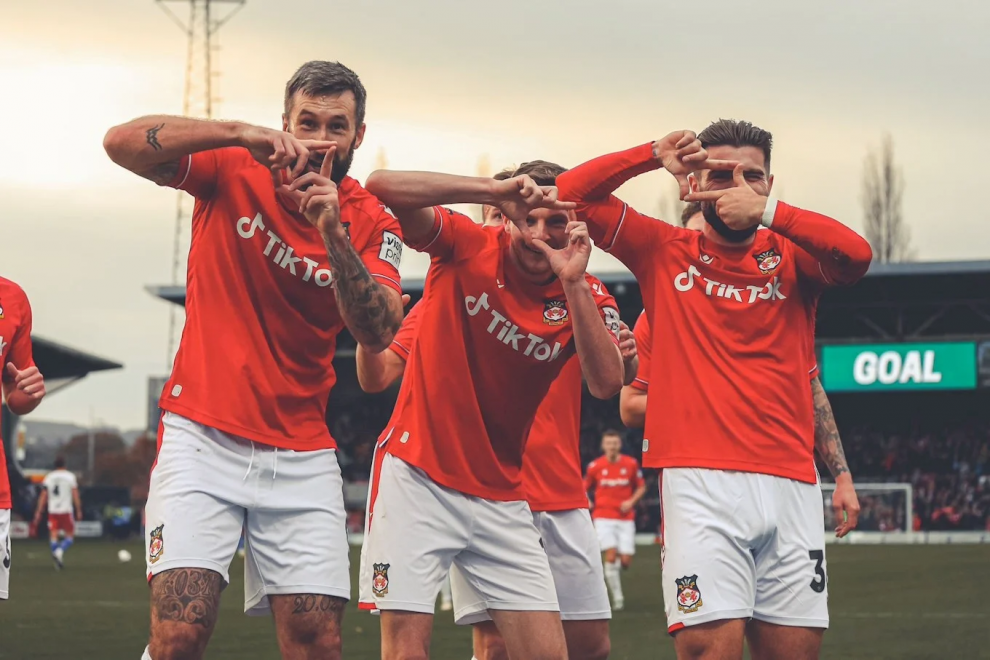 Paul Mullin and James Jones scored as Wrexham moved back to the top of the table, after a 2-0 victory over Aldershot Town.

First half goals, including Mullin’s sumptuous chip and Jones’ unmissable tap-in were more than enough to seal the three points for Wrexham at the Racecourse against the Shots.

Mullin opened the scoring, after running the length of the Aldershot half and astutely finishing from a tight angle against the impressive Luca Ashby-Hammond.

The Wrexham striker almost had a double within the first half, as he saw his left-footed shot cleared off the line by Ollie Harfield. Jones was on hand though to make sure Wrexham’s lead was still doubled, as he pushed the rebound home into an empty net.

Phil Parkinson’s team sheet included a return for Bryce Hosannah and Aaron Hayden, as Liam McAlinden and Tom O’Connor dropped to the bench.

An early opportunity in the ninth minute saw Luke Young’s corner find the head of Ollie Palmer. However, the striker was off-balance and couldn’t steer his header underneath the crossbar.

Elliot Lee found some surprising room on the edge of the Aldershot box in the 12th minute, but took a loose touch. This poor touch actually deceived the Aldershot defender and allowed Lee to curl a strike from closer to goal, which was saved by a flying Ashby-Hammond in the Shots’ goal.

An ambitious ball from Young on the halfway line found Ben Tozer inside the Aldershot box and was matched with a stupendous touch on his right-foot. The centre back then flicked an early shot at goal with his other foot, seeing the goalkeeper out of position, but the ball bounced just wide of the far corner with 22 minutes gone.

With 27 minutes on the clock, Palmer flicked on a header to the on-running Paul Mullin on the right-wing. The angle seemed to be forever narrowing as the striker strode into the box. However, Wrexham’s number ten was able to entice the goalkeeper slightly off his line, as he chipped the ball into the far corner to open the scoring for Wrexham.

A scramble in the penalty area led to Mullin flicking a left foot at the ball, forcing Harfield to put his body on the line and keep the ball out. James Jones was lurking on the goalmouth though and scored one of the easiest goals of his career in the 38th minute.

Half-time was called after a breathtaking first period by Wrexham, with utter dominance against the Shots capped off by Mullin and Jones’ goals.

A frantic start to the second half saw a handful of chances within five minutes of the restart. Palmer swiped a low-cross over the bar from close range, before having his placed effort from the back-post cleared off the line. Willard then received a poor throw from Mark Howard, allowing the winger to stride into the Wrexham box and drill an effort goalbound. Howard then made-up for his mistake, diving quickly to the floor to collect the ball.

Ashby-Hammond added to his reputation with a sprawling save in the 52nd minute. Lee somehow bundled an effort on goal from a Liam McAlinden cross and Ashby-Hammond reacted instantly to sprawl and push the ball away from his goalline.

Aldershot were better countering the Wrexham attacks this half and dangerously. This was proved when a cross found Frank Vincent in the middle of the Wrexham six-yard box, but he dragged his effort over the bar in the 54th minute, when he really should have pulled a goal back for the visitors.

This slightly chaotic ten-minute period soon came to an end, as the Red Dragons began to manage the affair better.

Young’s delivery was beyond impressive in the fixture, but he did have his turn shooting at goal in the 68th minute. Ashby-Hammond’s poor clearance found Young towards the halfway line and the Wrexham skipper felt obliged to shoot, with his long-ranged effort only just missing the empty goal.

Substitutions and good game management by Wrexham then drowned out any further chances, until the very end, when Inih Effiong’s deflected shot from inside the Wrexham box kissed the crossbar in the 90th minute.

Notts County’s draw at home to Yeovil Town confirmed Wrexham’s place at the top of the National League table. Full-time at the Racecourse was then greeted with tremendous chants as the Wrexham faithful had seen the news over at Meadow Lane.

Man of the Match: Ollie Palmer