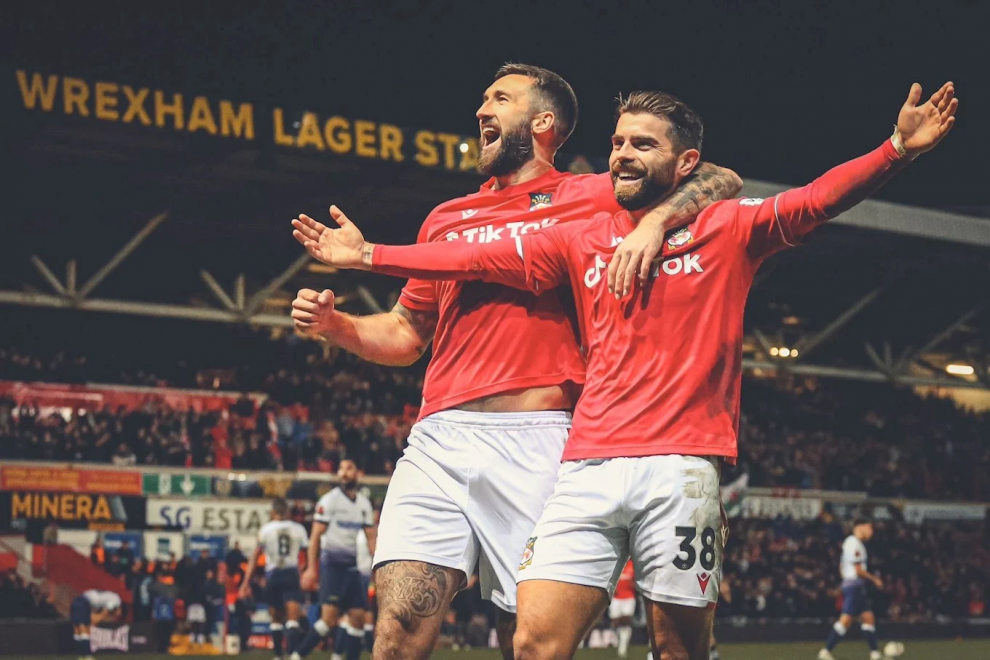 Paul Mullin’s hat trick inspired Wrexham to victory against Farnborough, sending the Red Dragons into the FA Cup third round for the first time since 2015.

Mullin’s opener was his 50th goal in Wrexham colours, and his second-half double made it twenty already for the 2022/2023 campaign.

Farnborough levelled the game just after the hour mark, as Oliver Pendlebury fired his free-kick goal bound, with Howard unable to save.

Elliot Lee put Wrexham back in front scoring his fourth of the season, with a curled effort from the edge of the area.

Phil Parkinson named two changes to the team that beat Aldershot in the Vanarama National League last time out.

Liam McAlinden and Sam Dalby both made the starting line-up, with Jacob Mendy back on the bench after a period out through injury.

Wrexham started the tie strong and threatened the Farnborough defence from set pieces.

Ben Tozer broke free at the back post in the early exchanges, but his drilled effort was well saved by Jack Turner.

The Yellows stopper was called into action moments later, making a superb double save from Jordan Davies, denying the number seven from point-blank range.

At the other end of the pitch, Mark Howard was called into action, making a smart save to stop Pendlebury in his tracks.

Jonathon Page came close to taking the lead for the visitors, as he unleashed a venomous volley from twenty-five yards out, that just sailed over the bar.

In the closing stages, there was some concern for Phil Parkinson; Jordan Davies left the pitch on a stretcher, after landing awkwardly on his left leg.

However, it only took Wrexham three minutes into the second half to break the deadline, as Mullin met Tunnicliffe’s flicked heading, poking the ball past Turner.

More pressure from the Red Dragons embarked on the visitor’s penalty area, and McFadzean should have doubled the lead, but he dragged his effort just wide of Turner’s post.

On the hour Farnborough equalised, Pendlebury struck a free kick from range, which Howard failed to save.

They could have taken the lead through Salim Saied, who jinxed his way into the area, forcing Howard into making a strong save.

Despite their chances, it was Wrexham who re-took the lead through a sublime strike from Elliot Lee, as he curled the ball into the top corner.

Mullin claimed his second and the Red Dragons third ten minutes from time, as a brilliant move started by Callum McFadzean, ended with the striker slamming the ball home.

And he finished the contest in style, finishing coolly past Turner, making it thirteen wins out of thirteen at the Racecourse this season.

Deeside’s Young Lifesaving Superstars win North Wales Cadet of the Year Competition
What do you think of public toilet provision across Wrexham?