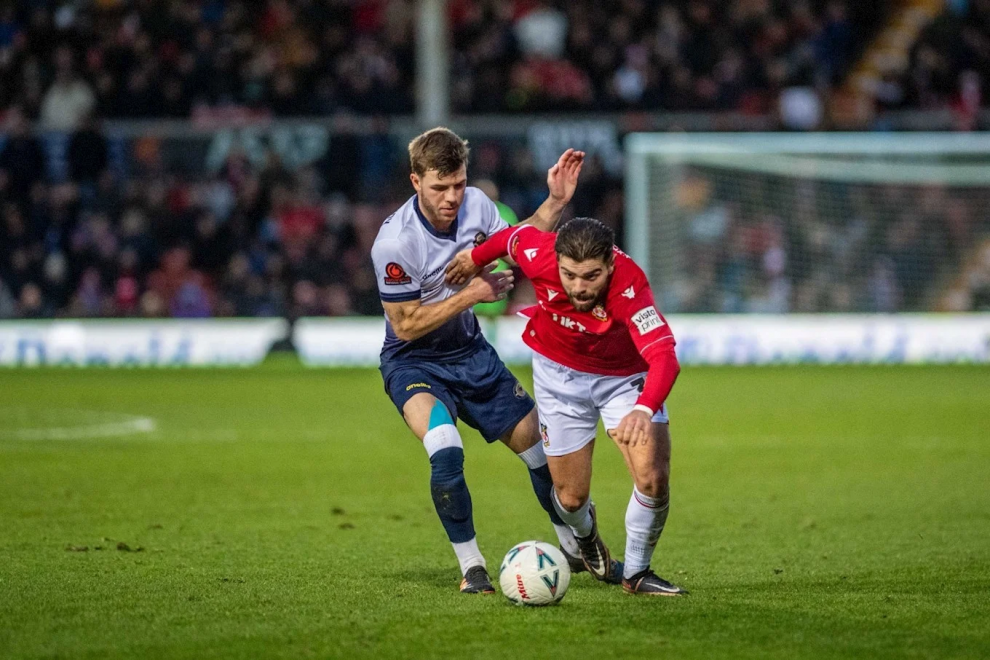 Top of the table and unbeaten in 12, Phil Parkinson’s Wrexham renew an old acquaintance when they face York City. The match takes place on Saturday December 3 and kicks off at 12.30pm, with the away end sold out and the macth set to be broadcast live on BT Sport.

They won’t be visiting familiar ground, though, as The Minstermen moved to a new stadium – the LNER Community Stadium – in 2021, four years after what turned out to be Wrexham’s final match at York’s former home, Bootham Crescent.

With Jordan Davies suffering a knee injury in the 4-1 win over Farnborough last Saturday, Phil Parkinson will have to make changes to his starting eleven, but players who are recovering from injury are making their way back into the reckoning to increase Parkinson’s options in other areas of the pitch. Rob Lainton, Jacob Mendy, Reece Hall-Johnson and Harry Lennon were all on the bench last Saturday, while Ollie Palmer is likely to return to the first eleven.

York have suffered a difficult spell in the last two months. They haven’t won in nine games and haven’t kept a clean sheet in that run either. Their poor form has seen them slip down the table after a promsing start to their return to the National League following promotion last season, and also cost manager John Askey his job.

Despite the poor run of results, though, the decision to relieve Askey of his duties was not popular with supporters, who hold their ex-manager in great affection. A poll in The York Press saw 91% of fans state that he should not have been sacked, and the reaction to the decision on social media has been overwhelmingly negative.

Some players took to Instagram to speak out against the sacking, with Michael Duckworth calling it an “outrageous decision”, while Ryan Fallowfield described it as “madness.”

Askey’s dismissal has certainly prompted upheaval at the club. Majority share-owner and chairman Glen Henderson has come in for heavy criticism, and the York City Supporters Trust, who own the remaining 49%, felt compelled to speak out after Askey’s departure:

“Mistakes have been made, they will be learned from and, to our best efforts, they will never be repeated,” a statement read.

“Your Supporters’ Trust board were shocked and dismayed to learn of Askey’s departure.

“Dismayed at the initial decision, we were then disappointed throughout the day with the manner in which John Askey’s dismissal was handled and communicated. Such a major decision affecting both John and the football club should have been handled better by all involved…..Between the briefing received from Club board members, and having listened to John Askey on the radio the previous evening, the Supporters’ Trust board recognise that the relationship between both parties had reached breaking point….

“On the matter of John Askey’s dismissal, we have presented the Club Board with considerable feedback regarding the events that led to a breakdown in relationships, the lack of earlier interventions, and the overall handling of John’s dismissal. Our feedback reflected the depth of fan opinion. However, the Trust board recognise that the action taken to relieve John of his duties were the culmination of numerous factors that had led to an irretrievable situation.

“While we deeply regret the situation, it is important for the good of the club to move forward and deal with the challenges ahead.

“We are sorry, we will do better.”

The trust have also suspended their fund-raising campaign, which was titled “Boosting John Askey’s Budget”. Askey himself complained that Henderson had been interfering with team affairs.

“Askey united our fanbase and gave pride back to supporters. For that we will be eternally grateful.”
-York City Supporters Trust Statement

Speaking to BBC Radio York, Askey said: “I’m really sad. I’ve enjoyed my time at the club and the support has been fantastic.

“It’s not something I wanted to happen, so I’m really disappointed.

“I was disappointed with how it was done. I stood in front of a printing machine, waiting for a letter to be printed.

“I read the letter and it says ‘You’re sacked’. That’s the biggest thing that hurt me more than anything.

“Alastair Smith, the chief executive, gave me the letter. Nobody spoke to me.

“Nobody ever came to me and said ‘John, you’re not doing a good job.’

“I’ve had no contact with anyone. I’ve not spoken to anyone, other than over text, for six to seven weeks.

“When I have spoken to someone, I’ve had to make the phone call….I’m upset.”

For their part, the club claimed Askey had told the club he wanted to leave, but couldn’t for personal reasons.