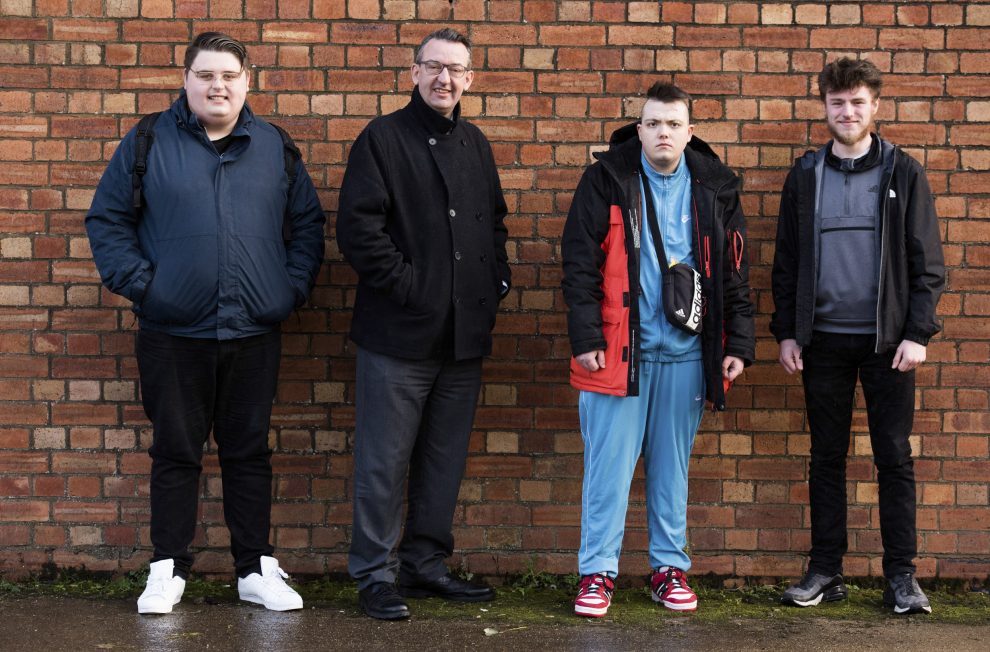 YOUNG people from across North Wales who went on an epic tall ship voyage were given the red carpet treatment at the premiere of a film about their adventure.

The team’s four-day expedition took them from Plymouth east to Southampton and around the waters of the Solent, off the Isle of Wight, as part of a trip organised by mental health charity Adferiad.

It was made possible by grant from the Office of the North Wales Police and Crime Commissioner’s Early Intervention Fund.

The film, Voyage to Recovery, charting the team’s seafaring experience was put together by Eternal Media and was shown for the first time at their base in Wrexham.

The four young men who took part came from Wrexham, Anglesey, Bethesda and Rhyl and helped crew the sailing ship Faramir, a 70-foot sailing ketch from the Cirdan Sailing Trust.

The voyage proved a valuable experience for the young sailors.

Joining them on the voyage were Daniel Bartlett, of Adferiad, and Dr Mike Jackson, a consultant clinical psychologist at Bangor University who has been working with them to provide adventure therapy for young people with anxiety and other mental health issues.

North Wales Police and Commissioner Andy Dunbobbin said: “It was very positive to see the outcomes for the guys who took part and you can still see the friendships it forged at sea.

“This is something we need to build on and it’s really pleasing to see how many different partners have got together to make this happen and the importance of building on this work.

“We all know what an issue mental health is at the moment and this is an example of a progressive and positive way of supporting these young people.

“It shows we need to look at alternative ways of helping them and this is a really good example of the direction we should be going.

“It’s definitely something I would like to support in future to build on the work done here.

“Adferiad have run this in partnership with Betsi Cadwaladr University Health Board and Bangor University and we’re very grateful for their support and the huge difference it is making to the live so these young people.”

Byron Williams, 20, from Llangefni, said: “At first I was very negative about it but there were lots of positives and I really enjoyed the trip and bonding with the others.

“I did get seasick at first but once I got over that I really got a handle on it and really enjoyed every moment but especially the sailing.

“It helped my confidence in speaking English and got me out of my comfort zone and made me interact with other people.

“I’m more open with my struggles now than I was at the start and it’s helped me understand my life better and put me in a better place.”

Alun Griffiths, 26, from Waunfawr, near Bethesda, was making his third trip and he said: “I still had a bit of anxiety and was unsure what to expect but once I got on board it was absolutely incredible.

“It’s a really, really good programme and it’s just too good an experience to miss out on and each time it has helped me in different ways and makes me more confident and better able to cope.

“I was having trouble eating and sleeping and this has helped me.  It gives you a different view of life. There’s nothing like it.”

Tycjan Cholawo, 22, from Wrexham, said: “I had mixed feelings to begin with because I didn’t know anyone on the boat but once we were there I really felt good about it.

“It’s really helped me. I haven’t felt the same anxiety I had before. I’ve been able to get back into work again.

“I enjoyed it and I hope I get the chance to do it again next year.”

Jake Cornhill, 21, from Rhyl, said: “I’ve been on the sailing trip before and at first I didn’t want to go but this time I really enjoyed it and it’s helped me a lot when I was there and now I’m back as well.

“I didn’t know any of the others on the boat but we all got on really well and it’s given me a real confidence boost.

“I want to do something with my life and this has given me a real confidence boost.”

Dr Jackson, a keen sailor himself, said: “This has provided young people who have been stuck in their lives with an opportunity to really throw themselves into something positive while costing less than one night in a psychiatric hospital.

“We have found that it is very difficult to work at these problems in a traditional way which is why we’ve been doing more work outside and getting them involved in activities like this in unfamiliar situations.”

Daniel Bartlett said: “We have used the money we have received over the last three years to run an adventure programme which began on a small scale and we have built it up over three years to take in larger experiences like this.

“It is great to be able to help young people suffering with psychological issues to deal with stressful experiences.

“We’ve been able to use the money from the Police and Crime Commissioner to provide a variety of activities from foraging and mountain biking to paddle-boarding on Llyn Padarn on to the sailing trips.”

Teresa Owen, BCUHB’s Executive Director responsible for mental health services, said: “This is a wonderful example of how thinking outside the box and looking at alternative ways of providing mental health support can make a real difference. We’re extremely grateful to the Police and Crime Commissioner, Adferiad and Bangor University for making this possible.”

North Wales rescue dogs star in Ashes-inspired cricket video
What is the most iconic screen car?