‘If you value better policing, vote for it’, says Shadow Policing Minister 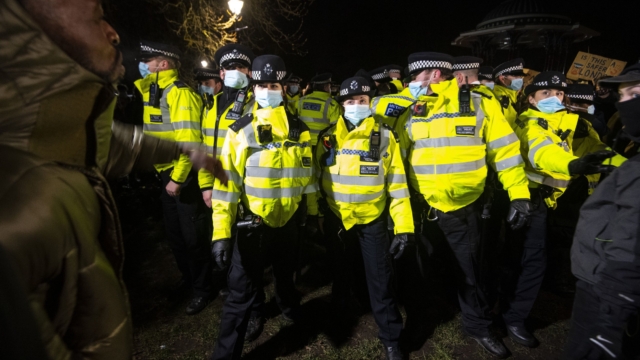 People clash with police as they gather in Clapham Common, London, after the Reclaim These Streets vigil for Sarah Everard was officially cancelled. (Photo: Victoria Jones/PA Wire)

Over the last few days of the Senedd and Police and Crime commissioner election campaigns, Welsh Labour is pushing its focus on creating safer communities – and more prosperous communities. And we have a strong foundation across the South Wales Police area thanks to Alun Michael’s focus on driving down crime and antisocial behaviour, tackling crime at its root and ensuring that criminals are brought to justice.

Welsh Labour Government established the Live Fear Free and the Dyn helplines for women and men who are victims of violence and domestic abuse, alongside the ground-breaking Violence against Women, Domestic Abuse and Sexual Violence (Wales) Act.

Speaking after the visit, Labour’s Shadow Policing Minister, Sarah Jones MP, said: “In the face of relentless austerity cuts from the Tories in Westminster, Welsh Labour stepped in and put 500 Community Support Officers on the streets, while the Tories cut police numbers across the UK to their lowest level in a generation – and they’ll cut community policing if they win in May.

“They’ve shown the real difference Labour makes in Government – and will go further if re-elected by funding an additional 100 PCSOs. The choice here could not be clearer – it’s a vote for Jane Hutt and Welsh Labour who will put community safety first, or a vote for the Tories who will cut PCSO numbers across Wales. If you value better policing, vote for it.”

“My promise is to do even more in partnership with the Welsh Government to stop young people being drawn into crime, to further reduce domestic violence and abuse while supporting the continued development of South Wales Police which is recognised nationally as a high performing Force – building on the firm foundations we have put in place, together.

“If you value all that we have achieved together, then you have to vote for it – vote Alun Michael, Jane Hutt and Welsh Labour this Thursday.”

Welsh Labour’s candidate for the Vale of Glamorgan, Jane Hutt, said: “When Welsh Labour promises to deliver something, we deliver it – I was proud to be part of the Welsh Labour Government that delivered our 6 key 2016 promises, and in this election, we’ve pledged to go even further.

“We know that safer communities are more prosperous communities – that’s why Welsh Labour is creating the jobs of the future and will fund 600 PCSOs in the next Senedd term.