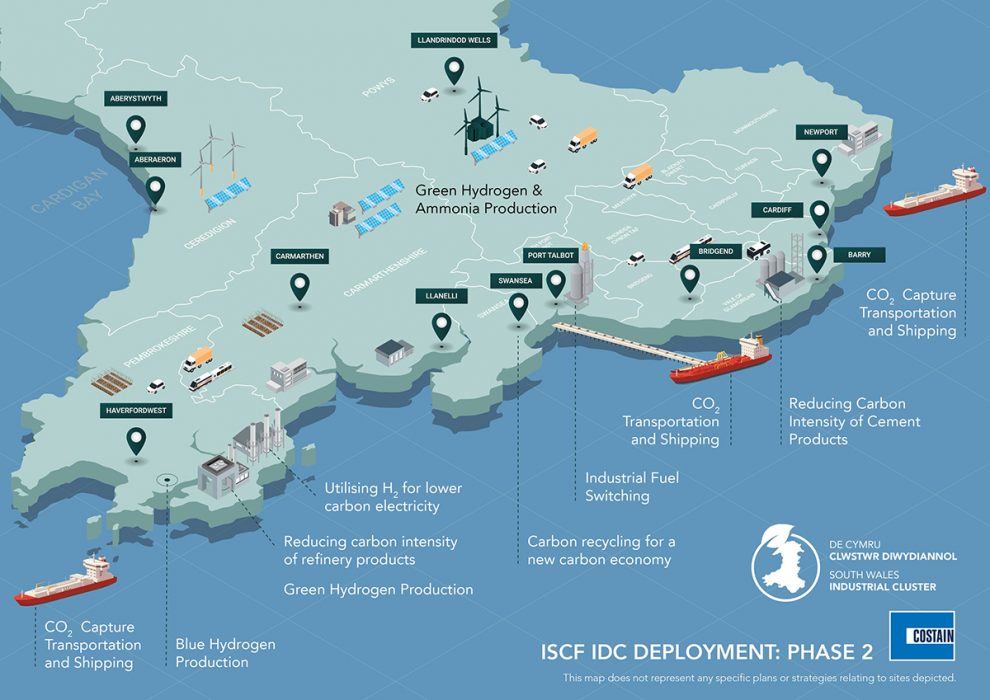 SOUTH WALES is set to become a leading global player in the next green industrial revolution thanks to almost £20 million of funding announced today.

UK Research and Innovation (UKRI) has awarded the funding to support a £37 million programme which will boost Wales’ economy, create new jobs and drastically reduce the country’s industrial carbon footprint.

The programme is being delivered by the South Wales Industrial Cluster (SWIC), a partnership of organisations from the Pembrokeshire coastline to the English border working to decarbonise industrial areas of Wales and promote green energy.

Their work will centre on supporting the use of hydrogen as a more environmentally-friendly fuel and developing facilities to capture, use and store carbon dioxide produced by industry, urban areas, transport and agriculture.

Projects in the pipeline will have far-reaching benefits, creating around 5,000 new jobs in clean energy production, securing up to 113,000 industry and manufacturing jobs, and investing £2-4 billion a year across Wales to achieve net zero carbon emissions by 2050.

Match-funded by industry, the SWIC programme is being led by smart infrastructure solutions company Costaain, and delivered alongside a range of academic and industrial partners.

“The partners are working on innovative projects to reduce greenhouse gas emissions and explore the full potential of hydrogen as well as cleaner energy production using carbon capture and storage, the production of clean jet fuel and the development of port infrastructure which will allow carbon dioxide to be captured and shipped.

“Collaboration throughout the diverse group of organisations is already attracting investment at scale and the 17 partners have made significant progress in developing plans for South Wales to become net zero by 2040.”

South Wales’ award is a share of £171 million funding announced by UKRI today for projects across the UK which are designed to help reduce emissions and ultimately decarbonise industrial regions.

The support comes from UKRI’s Industrial Decarbonisation Challenge Fund, which aims to ensure the nation is on track to meet the government’s target to deliver net zero carbon emissions by 2050.

Bryony Livesey, Challenge Director for the Industrial Decarbonisation Challenge, said: “The announcement of this funding is a significant step in our progress supporting large-scale decarbonisation efforts, and we are looking forward to working alongside the project partners as they put their revolutionary plans into action.

“The benefits to South Wales will be substantial, not just in terms of the environmental impact but also the opportunities for job creation and increasing the global competitiveness of industry in the area. It once again showcases the UK’s industry as being at the forefront of innovation and creation of greener solutions for the future.”

Today’s  funding announcement  adds to UKRI’s councils’ long tradition of investing in cutting-edge research and innovation to understand, tackle and mitigate the effects of climate change.

In the year the UK hosts the UN COP26 summit in November, UKRI will use its role as a steward of the research and innovation system to create sustainable and resilient solutions and encourage new behaviours and new ways of living that enable the UK to reach net zero by 2050.

More information about how UKRI is supporting work to tackle climate change is available at https://www.ukri.org/our-work/responding-to-climate-change/.