Home > South Wales > Aberfan: What happened on the hillside?
History

Aberfan: What happened on the hillside? 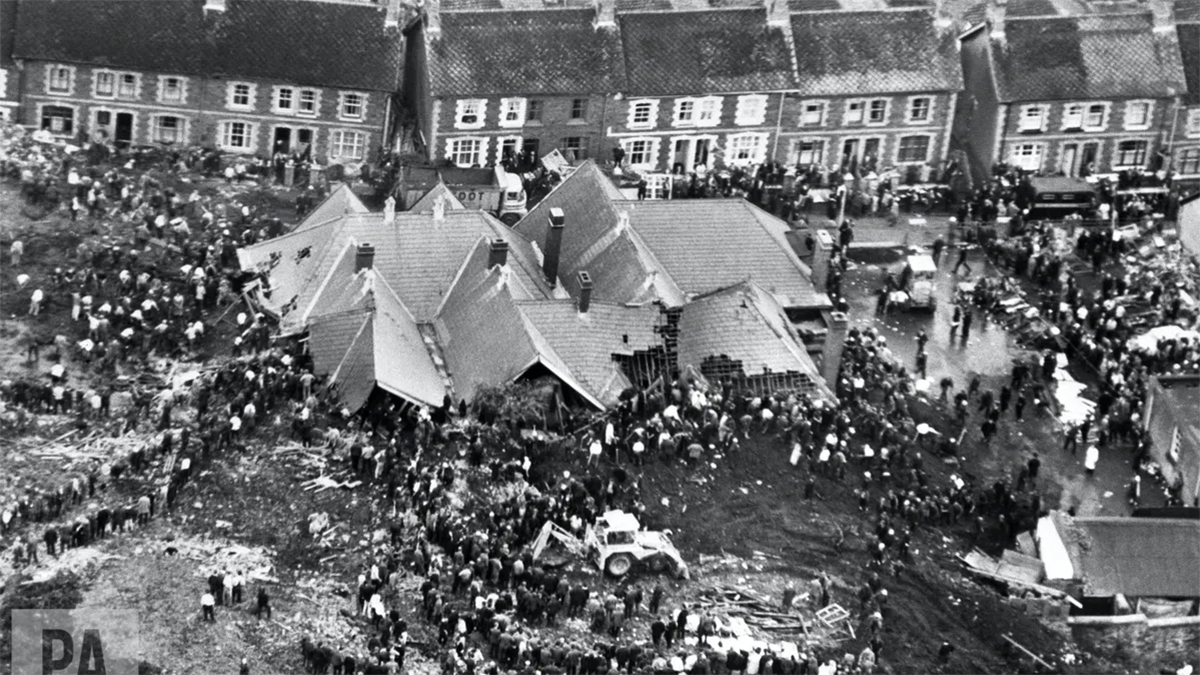 It destroyed everything it touched, eventually killing 144 people, most of them children sitting in their school classrooms.

The avalanche raced down a steep hill in Aberfan, sucking everything in its path into the chaos: landscape, buildings, an entire schoolhouse.

When David Evans, the owner of a local pub, heard about it from a neighbor, he ran into the street.

“Everything was so quiet, so quiet,” he told historian Gaynor Madgewick. “All I could see was the apex of the roofs.”

The avalanche wasn’t snow—it was coal waste that had slid down a rain-saturated mountainside.

The tragedy in Aberfan would become one of the United Kingdom’s worst mining disasters – and it was completely avoidable.

Despite the magnitude of the calamity, Queen Elizabeth II at first refused to visit the village, sparking criticism in the press and questions about why she wouldn’t go.

Finally, after sending her husband, Prince Philip, in her place for a formal visit, she came to Aberfan eight days after the disaster to survey the damage and speak with survivors.

Nearly four decades later, in 2002, the queen said that not visiting Aberfan immediately after the disaster was “her biggest regret.”

The foundation of the disaster was laid nearly a century before, when the Merthyr Vale Colliery, a coal mine, was opened in the area.

Wales had become famous for coal mining during the Industrial Revolution, and at its peak in 1920, 271,000 workers labored in the country’s coal pits. By the 1960s, coal mining was in decline, but was still a lifeline for some 8,000 miners and their families around Aberfan.

Coal mining creates waste, and the waste rock was dumped in a tip. Merthyr Vale had seven tips.

By 1966, the seventh tip, which was begun in 1958, was about 111 feet high and contained nearly 300,000 cubic yards of waste. It was precariously placed on sandstone above a natural spring, which lay on the steep hill above the village.

As mining progressed, the heaps of waste grew and grew. In 1963 and 1964 residents and local officials had raised concerns about the seventh tip’s location with the National Coal Board, which owned and operated the mine.

They were especially worried because the tip was located right above Pantglas Junior School, which was attended by about 240 students.

Those concerns were all too prescient, but the National Coal Board ignored them. “The threat was implicit,” notes the BBC: “make a fuss and the mine would close.”

On October 21, students at Pantglas were only scheduled for a half day of school ahead of a mid-term break. It had been a rainy day, but that wasn’t unusual—not only had it been raining for weeks, but the area got at least 60 inches of rain annually.

As the children congregated for morning assembly, they were excited.

At midday the half-term holiday would begin. Their daily rendition of ‘All Things Bright and Beautiful’ – a hymn written a few miles away in the bucolic tranquillity of the Usk Valley – was postponed that day.

They would sing it before they went home when the head teacher planned to wish her pupils a safe and enjoyable holiday.

The children filed into classrooms.

And so the world turned in Aberfan much as it had done for the past 100 years, when the community burgeoned around the Merthyr Vale colliery which began in 1869.

It happened so quickly that nobody could prepare. Students heard a sound like a jet plane. It was black quicksand burying everything in its path. The slurry hit the school, slamming its walls to rubble and pouring in through the windows. Pipes burst and water began flowing outside the school.

One tipping gang worker told a subsequent inquiry how the slide began.

“It was starting to come back up,” he said. “It started to rise slowly at first, sir… I thought I was seeing things. Then it rose up pretty fast, sir, at a tremendous speed.

“Then it sort of came up out of the depression and turned itself into a wave… down towards the mountain… towards Aberfan village… into the mist.”

Down the hill, the town, which had begun to flood from streams clogged with debris, sprang into action.

Emergency workers and volunteers ran up toward the school to help.

“Civil defense teams, miners, policemen, firemen and other volunteers toiled desperately, sometimes tearing at the coal rubble with their bare hands, to extricate the children,” reported The New York Times.

“Bulldozers shoved debris aside to get to the children. A hush fell on the rescuers once when faint cries were heard in the rubble.”

Alix Palmer, a young journalist on his first major assignment, went to Aberfan to report on the rescue efforts. It had been hours since anyone had been pulled out alive.

“The fathers straight from the pit were digging,” he wrote to his mother afterward. “No-one had yet really given up hope, although logic told them it was useless.”

In the aftermath, the true scale of the disaster became clear. One hundred and forty-four people were dead, 116 of them children. Half of the village’s children had been killed.

“All our friends were gone,” Jeff Edwards, who survived the disaster pinned beneath his desk, told the BBC in 2016.

A tribunal later concluded that the National Coal Board was responsible for the disaster after examining 300 exhibits and interviewing 136 witnesses.

“The Aberfan disaster could and should have been prevented,” said the tribunal in its report.

The disaster was a matter “not of wickedness but of ignorance, ineptitude and a failure in communications,” it wrote.

Great Britain quickly mobilized on behalf of the people in Aberfan. The Aberfan Disaster Memorial Fund, which was set up on the day of the disaster, raised the equivalent of £8m.

The money was used to pay for repairs in the village and the care of those who were injured and bereaved in the disaster.

But the money also had to help pay for the removal of the remaining tips that lurked above the village. The head of the National Coal Board refused to visit Aberfan and parents of children had to prove they were “close” to their children to receive a payment of £500 from the board. The funds for removing the tips were only repaid in 1997—without interest.

Someone else had lingering heartache about the Aberfan disaster: Elizabeth II. Instead of visiting herself, she sent Prince Philip in her stead.

“We kept presenting the arguments,” an advisor told biographer Robert Lacey, “but nothing we said could persuade her.”

Finally, she had a change of heart and visited eight days after the slide, speaking with village residents and showing poignant grief—an uncharacteristically emotional display for the usually stoic queen.

For the people of Aberfan, the visit was part of the healing process. “They were above the politics and the din and they proved to us that the world was with us, and that the world cared,” Marjorie Collins, who lost her eight-year-old son in the disaster, said in 2015.

But nothing could make it less bitter to lose a child.

“I lost my daughter and we were lucky to save the lad,” an Aberfan father told LIFE in 1967.

“No amount of money will fetch any of them back, will it?”

Neath Port Talbot’s best ever recycling rate – thanks to you!