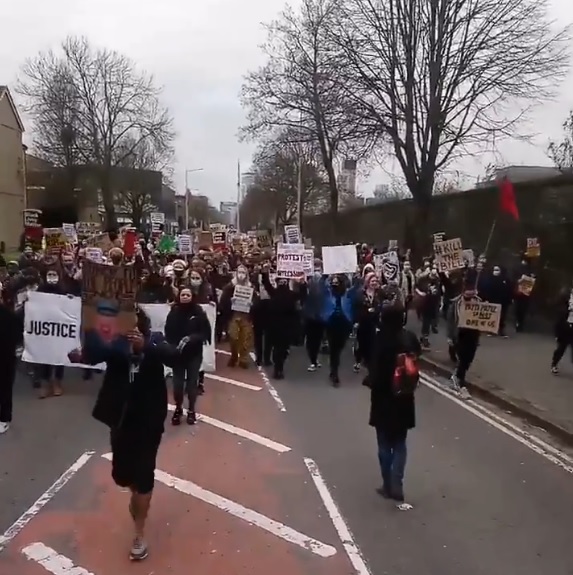 AT 2PM on Saturday (Mar 20), Welsh activists converged in Bangor, Wrexham and Cardiff to protest the UK Government’s ‘Police, Crime, Sentencing and Courts’ Bill and to raise awareness of police brutality.

Activists in Cardiff and Bangor gathered at their local police stations, whereas those in Wrexham met at the office of their MP, Sarah Atherton.

The Bangor groups planned an open mic, a minute of silence to ‘honour the sisters we have lost’ then a laying of flowers in remembrance. The Wrexham groups planned a procession to lay placards at the door of their MP’s office.

The protest in Cardiff was the latest in a series of demonstrations against South Wales Police, which have been occurring since January when Cardiff resident Mohamud Hassan died after a day spent in police custody.

Since the murder of Sarah Everard at the hands of a police officer – and the violent response by the Met Police to a vigil held in Clapham Common on March 13th – there have been three demonstrations in Cardiff, two in Wrexham and in Swansea, and one in Bangor and in Newtown.

Sarah Everard’s murder happened to coincide with the second Parliamentary reading of the Government’s ‘Police, Crime, Sentencing and Courts’ Bill’, which passed said reading on March 16th with a vote of 359-263.

The 300-page Bill makes a wide variety of changes to the justice system in England and Wales, from tougher sentences for killer drivers to provisions allowing court appearances over video conference.

Many aspects of the Bill have caused controversy, including the expansion of police powers to deal with protests, more stop-and-search, and laws about encampments that critics say will persecute Gypsy, Roma and Traveller communities in the UK.

Various movements across the UK have come together in these protests, including Black Lives Matter, Extincion Rebellion and women’s rights group Sisters Uncut amongst others, all of whom demand that the Government ‘Kill the Bill.’

The committee stage of the Bill has been postponed until June by the UK Government, but protests have continued this weekend.

‘The Government and much of billionaire-owned media will say that the Policing Bill is ‘necessary to deal with extreme protestors’. In reality, this Bill is the death of our democracy. More police powers won’t make streets safer for women or for racialised people. And once peaceful protest is illegal, what will the Government do to us then?

A lot of people will say ‘what about COVID?’ They’re right. I know the protests have been COVID-safe as possible, but it is still too early to have mass gatherings like this. The Government know this and tried to rush the Bill through this week, hoping for no resistance. They made us choose between the risk of COVID or the guarantee of our loved ones permanently suffering police brutality under a fascist state. I’m not a fan, if you can’t tell.’

Warning to parents as teens caught starting fires in Rhondda

How do you fancy a designer outfit for the cost of a garment from Primark?