Bristol ‘Kill the Bill’ protest: The demo that turned ugly 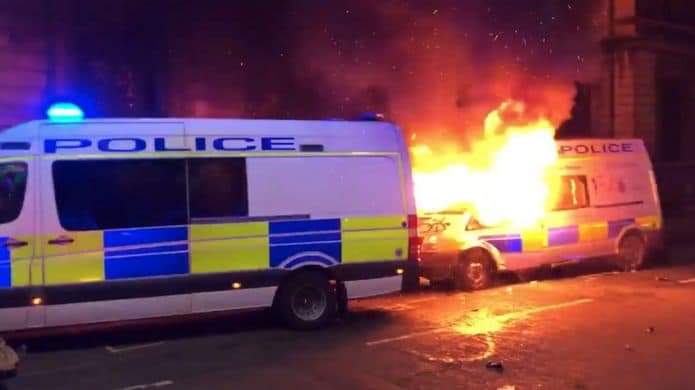 IT STARTED as a peaceful demo.

Crowds gathered in Bristol on Sunday, to a near carnival atmosphere.

‘Kill the Bill’ protestors gathered on College Green at about 1:30pm and from there began walking the streets of Bristol.

The demo was described as ‘party-like’ by many.

By 6pm on Sunday the protestors began congregating outside Bristol’s main police station: Bridewell, in the city centre.

100-200 protestors, mainly young people and women, sat outside the station with many more lining up across the road.

Even though the police were outnumbered by an estimated 90-1, no violence occurred. The protest was, at this point, still peaceful.

Then the first wave of police support arrived and proceeded to step on and over people to gain access to Bridewell Police Station.

Police began to separate and isolate small numbers of protestors whilst others stepped on or shoved protestors deemed to be in the way.

Despite this behaviour, protestors only retaliated by shouting ‘Shame on you’ and rocking the only Police van conveniently left on the street outside.

By 6:40pm, the powder keg was ready to blow and police were left with a choice: pull back or tip an increasingly volatile atmosphere over the edge.

Police decided that the best way to control the situation was to send in Canine Units and officers who began swinging batons at protestors heads, kicking and even beating a woman who had raised her hands to show she was no threat.

Baton swinging was the spark this powder keg needed to explode, which it did.

In the 24 hours immediately after the riot, public figures from across the UK spoke out to condemn the level of violence witnessed in Bristol.

Chief Constable of Avon and Somerset Police, Andy Marsh said that the protests had been “hijacked by extremists who were determined to commit criminal damage”.

Prime Minister Boris Johnson described Sunday’s events as ‘unacceptable’ and went on to add that “They should protest peacefully and legally.”

However many supported the protests on social media blaming the police for the violence. Here in Wales, Black Lives Matter Cardiff and Vale released a passionate statement that read: “Solidarity to our comrades in Bristol.

“You might see this image or images such as this used as a way to attack Bristol protesters, or even to support the bill.

“We say this: the police have been setting our communities on fire for decades. They’ll call us violent, but the real violence is from the police and the state. Two lives have been taken in South Wales in just the last two months by the police. When they murder us, they don’t even lose their jobs, when we set a van on fire, we get sentenced. We don’t care about your vans – we paid for them anyway.

“This is a warning – if you pass this bill, expect more of the same. The fetishisation of ‘peaceful protests’ in Britain is embarrassing. They have never been peaceful with us. They are violent, sexist, racist pigs. Don’t let them fool you.”

A community leader from Haverfordwest, Lee Hind, summed it up on his Facebook page. His comments have been shared widely – he said: “Wow – some of you do realise that protest is the only way key things changed over history – and yes, sometimes violent protest is where it’s at – civil rights, women’s right to vote – protested, sometimes violently, into existence.

“Now some randoms set fire to a police van to protest the biggest legal assault on the right to protest ever and even the ones I would normally expect to be anti Govt are parroting the tabloids (government propaganda) language and calling the protestors animals, and claiming they shouldn’t be doing what they’re doing.

“Try understanding the bigger picture, the cause, not the symptom.”

With more protests planned across the UK, we can expect more scenes like those in Bristol as people from across the country turn out in their numbers to protest a bill many see as decimating the freedom of speech and right to assemble – inalienable rights enshrined in Britain’s unwritten constitution.

Mass gatherings are currently banned under the coronavirus legislation and anyone breaching the regulations could be fined.