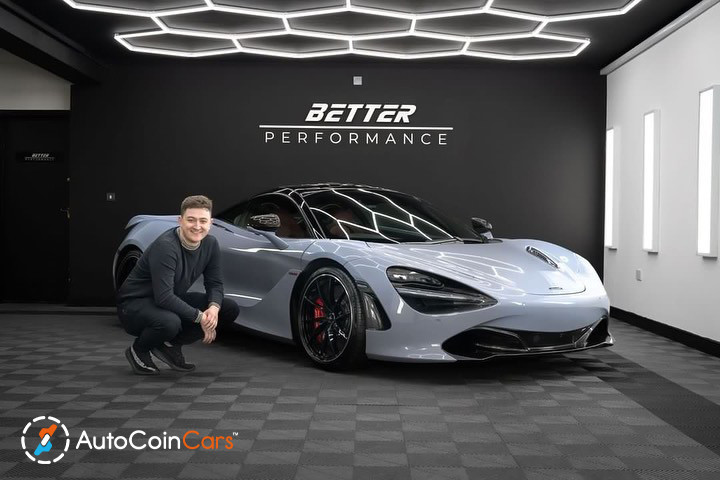 A CARDIFF performance car dealership is celebrating after securing a major sale using Bitcoin, just days after launching the new offering to its clientele.

Better Performance, based on Penarth Road, began its new partnership with the AutoCoinCars platform just this week and its first sale was off the start-line in record time.

Perhaps unsurprisingly, given it was for a McLaren 720S supercar, which was purchased by Instagram star Louis Hadfield. (@haddzy_).

Paul Walker at Better Performance said: ”We can’t quite believe it to be honest. We are always on the lookout for more innovative ways to look after our customers and to make buying a car with us as seamless and enjoyable an experience as possible.

“We are talking about high-performance vehicles, so our processes and offering has to match that. We only started working with AutoCoinCars this week and whilst we knew they would be a huge asset to us we didn’t expect quite such a swift return on investment! It’s all very exciting and just goes to show that if you move with the times, you will reap the rewards.”

Taking to Instagram to announce his new purchase to his 8000+ followers, Louis or @haddzy_ as he is known on the platform, said: “I still can’t believe it! Yesterday purchased my first supercar! McLaren 720S. Thanks so much for all the support. Big shout out to the amazing service of @betterperformance_ & @autocoincars.”

AutoCoinCars is making a name for itself in the motoring industry as it disrupts the market with the new approach to buying and selling vehicles with cryptocurrency.

Luke Willmott, co-founder and COO of AutoCoinCars, which already has over 850 dealerships using its platform comments: “I knew those McLaren’s were quick but this is off the charts! Seriously though, I’m delighted for Louis and the team at Performance Cars.

“The dealerships we have on our platform are all leaders in their field in terms of their product offering and are also laser focused on customer service, as are we. There has often been criticism of cryptocurrency in that it is not tangible. However, we can now help people like Louis to unlock the potential of their portfolio by converting their Bitcoin into physical assets

“It’s been a really exciting end to year for us, completing the world’s first ever Bitcoin transaction for an Ariel Atom and the UK’s first motorbike transaction via Bitcoin, so we are proud pioneers in this market. This is probably our quickest ever sale after partnering with a dealership and it is pretty apt that it would be a McLaren that was bought!”