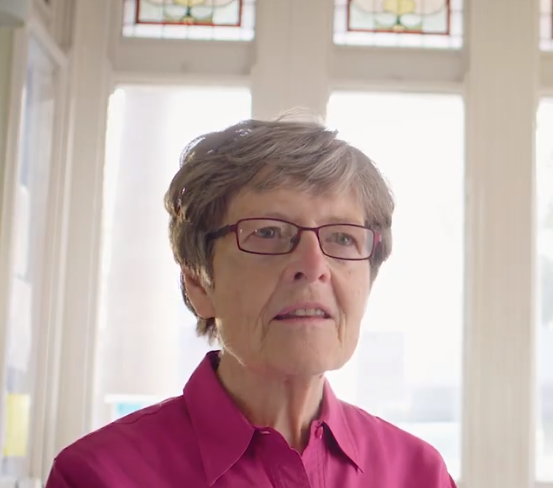 WELSH icon Cerys Matthews has honoured an inspirational Caerphilly hero with a National Lottery Award in recognition of her incredible work in the community.

Musician, author, and broadcaster, Cerys Matthews MBE, presented Katherine Hughes with her prize today after it was announced she had won the UK-wide Community and Charity category in the 2021 National Lottery Awards.

More than 1500 nominations were received in this year’s campaign and a judging panel selected Katherine Hughes, a volunteer and the Secretary of Caerphilly Miners’ Centre for the Community (The Miners), as the UK winner for her unwavering voluntary efforts over the years and as one of the driving forces behind saving the historic local landmark for future generations.

When plans to close and demolish the former Miners’ hospital in Caerphilly were announced 15 years ago, volunteer Katherine, 72, was at the forefront of the community group that helped save the building. With the hospital on her doorstep, when she heard about the plans to knock it down, she used her background of working as a town planner and community development consultant to lead the charge and rally the community to take it over.

Katherine, who lives a short walk away from ‘The Miners’, helped to establish Caerphilly Miners’ Centre group in 2008, shortly after she overcame treatment for cancer. After a 99-year lease on the building was secured and with the support of £250,000 from The National Lottery, the building was refurbished and reopened in 2015. Katherine said it would have been a “travesty” if the building – where many generations of South Wales families had their babies – had been demolished.

It’s now a fully accessible vibrant hub for the community where people of all ages and abilities are able to access a wide range of affordable services and activities. This includes a packed calendar of language, art, fitness, knitting, computer and dance classes, as well as buddy schemes and other social activities.

With no sign of stopping, Katherine continues to be heavily involved as a volunteer steward and group leader, as well as the centre secretary. She has helped keep all ages engaged during the pandemic and even went round older members to show them how to use Zoom so they could keep in touch.

All of this year’s winners, including Katherine, will receive a £3,000 cash prize for their organisation, along with an iconic National Lottery Awards trophy.

Cerys Matthews travelled to the Caerphilly Miners Centre to present Katherine Hughes with her award. She was joined by the Chair of The National Lottery Community Fund, Blondel Cluff CBE, to congratulate Katherine on her achievement.

Delighted to be announced as the winner, Katherine said: “I’m absolutely gobsmacked and thrilled to have won the award. The National Lottery’s support has played a vital role in getting the centre up and running and I’m delighted to receive this recognition. I’m so proud of how far we’ve come and the community we’ve built here. I would like to dedicate this award to all the other volunteers and people in the community who have worked tirelessly to save the building and who continue to make this the special place that it is today.”

Presenting Katherine with her Award, musician, author, and broadcaster, Cerys Matthews, said: “I’m thrilled to present Katherine with a National Lottery Award for her unwavering voluntary efforts over the years.

“She is a shining light, a remarkable community champion as one of the driving forces behind saving this historic local landmark for future generations.

“I’m sure people in Caerphilly are immensely proud of her monumental efforts. But I’d also like to say thank you to everyone who plays the National Lottery: You make projects like the Caerphilly Miners Centre possible – and your support now is more crucial than ever.”

The Chair of The National Lottery Community Fund, Blondel Cluff CBE, said: “This award is very well-deserved – Katherine’s drive to save this historic building and transform it into a vibrant space for her local community is truly inspirational. It is humbling that there are thousands of dedicated volunteers, like Katherine, doing extraordinary things with National Lottery funding and supporting their communities to prosper and thrive across the UK. The ultimate in recycling!”

Thanks to National Lottery players, more than £30 million goes to good causes across the UK every week, which in turn helps people like Katherine Hughes continue to carry out incredible work in their communities.

The Welsh revealed as the UK's most avid music listeners

Review of the Union: the same but more so