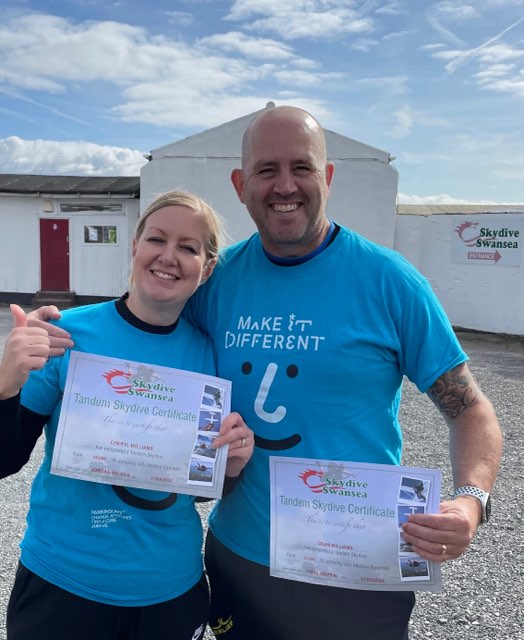 A DAREDEVIL Parkinson’s nurse has completed a skydive in memory of her late father, who was diagnosed with the condition.

Cheryl Williams, 45, from Caerphilly, plummeted towards the ground at 135mph after jumping from a plane with Skydive Swansea above the stunning Gower Peninsula, to raise money for Parkinson’s UK Cymru.

The mother of two, and Nan of one, took on the challenge with her husband, Dean, and together they raised £1,385 for the charity, as a tribute to her dad, Graham Booth, who passed away at the age of 69.

The dedicated health worker, who works across Gwent with Aneurin Bevan University Health Board, started out as a district nurse, a job which she did for 10 years.

Her current role, which she began in 2018,  was initially funded for 18 months by Parkinson’s UK Cymru, and she says that she undertook the jump to give something back to the charity.

Following the skydive, Cheryl spoke movingly about the impact the condition had on her father, who was diagnosed with Parkinson’s at the age of 62, before he received a diagnosis of Parkinson-Plus syndrome.

Cheryl said:  “He was always fit and well and he was given this diagnosis fairly soon after his retirement. It had a big impact on him because he was always such an active person.

“When people with Parkinson’s start medication, it often works very well. You have to keep an eye on patients to review progress, when some develop Parkinson’s plus syndrome. The medication doesn’t always work that well.

“He was falling backwards a lot and he noticed that his eye gaze wasn’t very good. He struggled to look upwards. That’s where the PSP diagnosis came into it

“Being a district nurse at the time I’d managed to get a lot of help in place for my mum.

“We had support from occupational therapists, physiotherapists, and the speech and language team were heavily involved as well.

Cheryl became a Parkinson’s nurse in 2018, after she started taking care of her father following his diagnosis with the condition.

She said: “Being heavily involved in his care as a district nurse I applied for a Parkinson’s CNS role.

“Parkinson’s UK funded the position for 18 months. I felt I just wanted to give something back to Parkinson’s UK. I wanted to do something in memory of my father, and for all the patients as well who cross my path every day because it’s a life-changing  condition to have.

“My job is rewarding. I can see it from a personal side of things and I try my best to accomplish it from a professional side. It’s tough because it’s a constant reminder, especially when we have the Parkinson’s plus patients coming into the clinic and you can see how much pressure the condition can affect them as a family.

“I really empathise with them because I have been in their shoes. It’s a rewarding job but it does pull on the heartstrings.

“It impacts the whole family as well as the person who has Parkinson’s. Parkinson’s UK was really good to use as a family.

Karen Miles, Senior Parkinson’s Adviser for Wales at Parkinson’s UK said: “I think what Cheryl has done to raise money for Parkinson’s UK Cymru with the sky dive is absolutely amazing. She’s very brave and we’re incredibly grateful for what she’s done..

“Having worked closely with Cheryl to support people living well with Parkinson’s, I know how dedicated she is to her job, and with this skydive she’s taken that dedication to another level.”

“But as soon as we had an introduction really and I met the instructor, they put you at ease straight away. We watched a little clip of what you were expecting, and then you got suited and booted, and off we went.

“They didn’t give you much chance to think about it once you have the kit on. It was surprisingly calm in the plane.  I think I enjoyed it more when the parachute opened. It was initially freefalling at 135mph, which is pretty fast.

“Once the parachute went up you could appreciate the views. Iit was a beautiful day. There was glorious sunshine with fabulous views, so I really enjoyed that bit. However, it was a relief to land.

“Ironically  it was my dad’s birthday, so the date meant a lot to me. I suppose I couldn’t have gotten much closer to him that day than I was up there. I didn’t want it to be cancelled because the date was also  one of the reasons I signed up as well.”