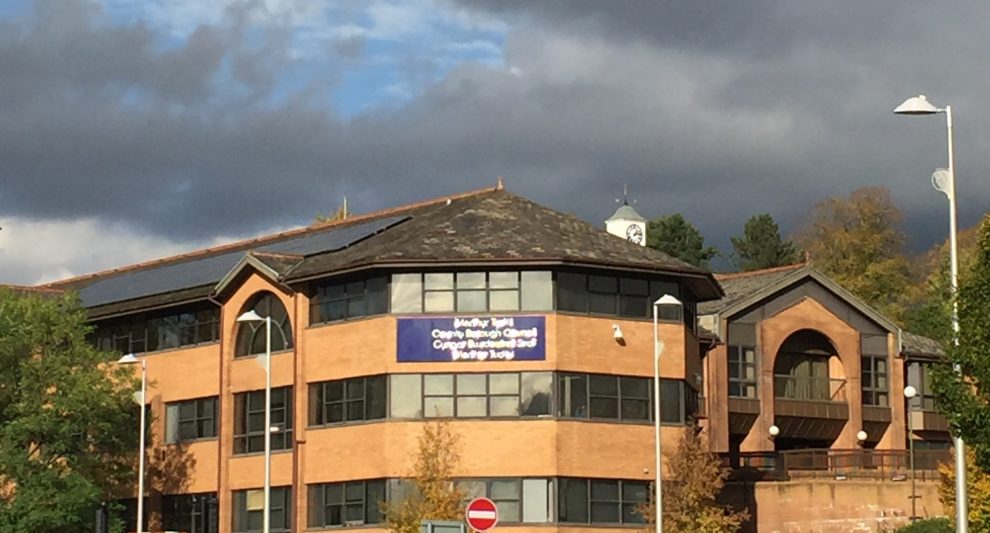 Independent and Labour councillors in Merthyr Tydfil have clashed over who is responsible for the financial situation the council is facing.
Councillor Andrew Barry, independent cabinet member for finance, said the UK Government had thrown the economy off a cliff but also said the Welsh Government has turned its back on the Valleys with the latest provisional settlement for Merthyr Tydfil.
But Labour councillors have said the responsibility lies with the UK Government and what it called its mismanagement of the economy.
The comments were made on a report which went before full council on Wednesday, January 11, which showed that after the provisional Welsh Government settlement in December, the authority is looking at a gap in its funding of £11.035m.
The provisional local government settlement saw a funding increase of 7% (from £110.7m to £118.5m) announced for Merthyr Tydfil for the 2023-24 financial year ranking it as 18th out of all 22 Welsh councils and below the Welsh average increase of 7.9%.
The final local government settlement is due to be announced on March 7 or 8, the report said.
The Medium Term Financial Plan (MTFP) covering 2022-23 to 2025-26 was approved in March last year and indicated a projected budget deficit of £5.462m for 2023-24 and a cumulative budget deficit of £16.408m over the period of the plan.
But the revised budget deficit for 2023-24, taking into account additional funding through the settlement and increased costs arising from the pay award, high inflation, real living wage for care workers, spiralling energy costs, increasing interest rates and unavoidable additional demands, comes to £11.035m.
The report said: “A budget deficit of this magnitude for 2023-24 alone is normally what is expected over a two year period highlighting the challenge faced by the council in addressing unprecedented additional and unavoidable external financial pressures.”
The report said business plans and other measures are currently being developed to address the budget gap and will be brought before councillors in the coming weeks.
The budget deficit assumes a council tax increase of 1% but that is yet to be decided by cabinet and full council.

The debate
Cllr Barry said Merthyr Tydfil, along with Blaenau Gwent, ranks as among the highest in Wales for council tax, adding: “If you ever wanted proof that the Welsh Labour government has turned its back on the Valleys and its working classes, here it is in black and white.”
He said they’re at the bottom of the settlement table while affluent areas like Monmouthshire, Cardiff and the Vale of Glamorgan are at the top.
He said the increase in the settlement has “set the tone” for this revenue budget because “that’s just about as good as it gets”.
Cllr Barry said it’s within the Welsh Government’s power to change that mechanism just as it is to change to a fairer tax system but nothing has changed.
He said: “So we find ourselves back having to overcome massive financial defecits.
“The Conservatvies have thrown the economy off a cliff and Labour have shown through their settlement they have very little thought for the people of Merthyr Tydfil so it is left to this administration and the officers of this authority to sort it out.”
He stressed the scenario set out is the “worst case” one and they will have mitigate it all they can to give the people of Merthyr the best outcome from “this really dire position”.
But Labour councillor Anna Williams-Price said Merthyr had received its highest settlement increase since 2006-07 and it is more than double what they had anticipated (3.5%).
She said: “So I think it is clear that Welsh Government does prioritise our vital local government services ensuring that they are properly funded.
“However, the UK Government mismanagement of the UK economy has resulted in a 8.1% decrease in Welsh Government funding so it is clear to me that the decisions made by successive UK governments have undoubtedly created the conditions for this unprecedented crisis which continues to impact on local authority finances and more importantly the household finances of residents within communities in Merthyr.”
But she said if they look at the figures on a per capita basis they will see that Merthyr Tydfil is second only to Blaenau Gwent.
Cllr Williams Price said: “My priority at this moment is ensuring that as far as possible no additional burden is placed on to our residents as a result of Tory mismanagement in Westminster.”
Councillor Geraint Thomas, independent leader of the council, said their funding comes from Welsh Government and that is who they go and speak to.
He said: “We are a devolved country and I believe we must speak to our government.”
Councillor Clive Jones of Labour said he understands what the leader said but that it’s a plain fact that the money comes from the UK Government and the way they have dealt with the economy in the last nine months has been “a total disaster” and said that’s the reason the public sector is in the situation it is in.
He said: “I’ve never seen a situation like this and the finger is pointed and has been pointing to 10 Downing Street so we can’t get away from the fact that the money tree is there.”
Cllr Gareth Lewis, Labour, said the independent administration “continue to bite the hand that feeds it” saying over the last five years there’s been an increase in the revenue settlement grant of 30% from just over £91m in 2019-20 to £118.5m for the next financial year compared to an actual decrease in funding for eight consecutive years during the years of austerity.
He said people will find it hard to comprehend that the council has gone from its strongest financial position in decades to being asked to accept significant cuts to council services within 14 months of this statement by the independent administration, adding that the independent group needs to stop making “sweeping and unsubstantiated claims that when scrutinised do not hold up”.
He said there needs to be reform of the Barnett formula at Westminster and it needs to be on a needs basis that will benefit economically deprived areas.

Pay award
The pay award for 2022-23 was agreed between the National Employers for Local Government Services and Trade Unions at an increase of £1,925 on all National Joint Council (NJC) pay points.
This results in a Merthyr Tydfil average salary increase of between 6% and 7%, compared to the budgeted 4%.
The teacher’s pay award was agreed at 5% from September 2022 with a projected 3.5% increase from September 2023.
For non-teaching employees, a 3.5% increase is projected for 2023-24 with an additional projected cost for Merthyr Tydfil for 2023-24 of £2.547m.

Energy costs
Total additional energy costs across the council’s estate come to £2.647m due to a projected increase of 293% for gas and 157% for electricity.
The report said energy markets are being closely monitored to determine whether the projected increases can be reduced.

Unavoidable additional demands
There are unavoidable additional budget demands resulting from service financial pressures such as demographic growth, legislative changes, new initiatives, loss of income and changes to grants terms and conditions.
These total £2.785m for 2023-24 compared to the indicative budget requirement of £3m.

The report said: “It is recognised that without reflecting these additional expenditure requirements within the MTFP the council will face significant financial pressures in remaining within budget for 2023-24 and the medium to long term.
“All additional demand requirements however are subject to ongoing review with any identified amendments, owing to updated information, reported in due course. The potential for further demand requests should also be noted.”

The impact of inflation
High inflation with the CPI currently at 10.7% has led to significant contract cost increases, the report said.
For Merthyr Tydfil the inflationary impact is £2.384m for 2023-24 and inflationary increases are subject to ongoing review and challenge but are considered unavoidable requiring inclusion in the 2023-24 budget because they result mainly from contract uplifts, the report said.

Employee costs reductions
The valuation of the Rhondda Cynon Taf Pension Fund in November 2022 has resulted in a reduction in Merthyr Tydfil’s employer contribution rate from the current year’s and budgeted future years’ rate of 25.3% to the actual rate for the next three years of 21.8%.
This has resulted in budget savings of £1.298m for 2023-24.
During Autumn 2022, the former Chancellor of the Exchequer announced the reversal of the previously approved 1.25% rise in
National Insurance contributions and this saves the council £491,000 in 2023-24.

Capital financing costs
The Bank of England’s most recent interest rate increase to 3.5% has resulted in the cost of borrowing to support capital expenditure becoming more expensive, with interest rates expected to peak at 4.75% during 2023.
For 2023-24 this results in additional capital financing costs of £1.89m as the council also reduced its risk exposure to increasing interest rates by re-financing an element of historic short term variable debt with longer-term fixed term debt.
This was done after consultation with the council’s treasury management consultant.

An extra Welsh Government grant for homelessness prevention
After the announcement of the provisional local government settlement, the council was told by the Welsh Government about an extra
£475,000 for homelessness prevention which can be used to offset the costs of temporary accommodation.
The report said that: “Although this additional funding is most welcome, the council is still faced with temporary accommodation costs of circa £2m for 2023-24.”

Council tax
The council tax increase for 2023-24 is currently budgeted at 1%, reflecting the approved increase for the 2022-23 financial year.
No decision has yet been made for 2023-24 but the report said every 1% increase or decrease to the budgeted council tax increase of 1% has an impact of around £259,000 net impact on the revised budget deficit.
The report said that senior managers are currently looking at measures to address the revised budget deficit of £11.035m for 2023-24 and that business cases are being developed to be brought before cabinet and council within the coming weeks.