Home » The impact of Monmouthshire development plan on Portskewett 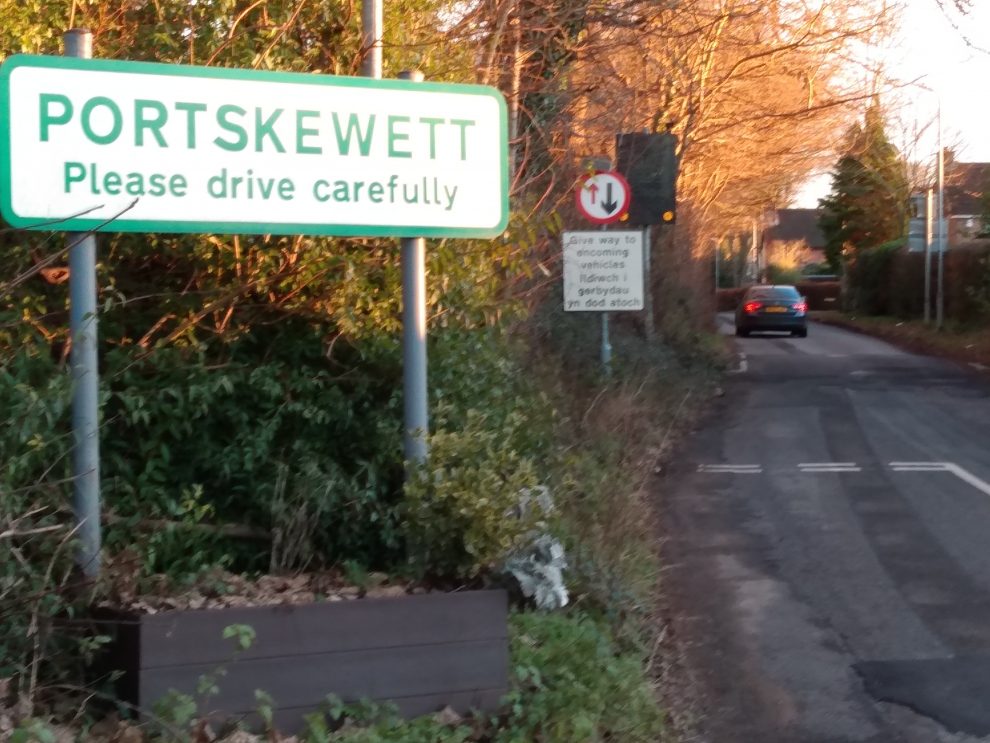 AS MANY as 2,200 new houses could be built in Monmouthshire over the coming 10 years – but, while the county stretches from the banks of the Severn to the Black Mountains, one small village has found itself at the centre of those plans.

Portskewett sits in the shadow of the second Severn Crossing and is built around a road, Main Road, that runs through its spine, where there is a hairdresser’s, a convenience store, a pharmacy, a pub and a garage with petrol pumps that look as if they have been out of service since well before what is now known as the Prince of Wales Bridge opened in 1996.

But the village is far from sleepy. Its northern edge has been transformed into a temporary giant car park as scores of cars and vans sit adjacent to a building site where a care home is under construction alongside 269 new houses with the wooden roof frames stored.

To the south of Portskewett is the neighbouring village of Sudbrook, which has also seen new housing in recent years at the former paper mill site that once provided the area with employment.

“There’s too much housing and they’ve not put the infrastructure in to go with it.” Those are the words of self-employed 54-year-old Steve Thomas as he supped a pint at the Portskewett Inn. Mr Thomas said he was concerned about a perceived lack of school spaces and trouble getting a doctor’s appointment.

They are common complaints and ones repeated to officers from the county council’s planning department at the church hall where they have been explaining the county’s development plan that proposes 925 homes, by 2033, in what the authority has termed ‘Caldicot East’.

That includes the Showground immediately to the north of the village – opposite the houses currently under construction at Crick Road – which is home to the David Broom Event Centre named after its owner, the Olympic showjumping medalist. If the plans go forward it would relocate.

Average house prices in Portskewett range from some £270,000 for a semi-detached to more than £460,000 for detached homes according to property website Rightmove, underlining the area’s popularity. Meanwhile, the council’s plan is that 50 per cent of all new housing will be affordable, including homes for social rent.

Building in the north of the county is on hold due to phosphorate pollution of the River Wye, leaving the council to accommodate all its housing ambitions in other areas, around existing towns, with the two other preferred main development sites being at Abergavenny and Chepstow, just four miles east.

Portskewett has already almost merged with its larger neighbour Caldicot, via the Castle Gate industrial estate, and the fear is building almost half of all new houses planned for the county here will alter the village’s character.

Barbara Thomas, 87, has lived in Portskewett for about 50 years, having first moved from the Rhondda when her late husband got a job at the giant – but now closed – Llanwern Steelworks on the eastern edge of Newport, which employed 6,000 at the time.

“A lot of people I knew in this area, and Caldicot, worked for the steelworks,” she said. “We lived in Newport for about 10 or 12 years but came here as it’s so friendly, a lovely quiet village.

“It was very much the countryside, the only thing you had to worry about was horses in the road, not cars. But it will never be a village again, it is just running into Caldicot and Chepstow.”

Mrs Thomas was among those to attend the council’s drop in event where she also raised issues around GP appointments and poor public transport provision.

Others were unaware of the event, or the possibility of new housing at the Showground, such as bricklayer Chris Taylor who was visiting the local shop. But he thinks it is probably too late to worry about new housing.

“It’s gone from a small village to a big village so it doesn’t really matter how big it gets, although you wouldn’t want it to be like Newport,” says Mr Taylor, who lives in Sudbrook, which has also seen rapid expansion.

“They call it ‘Little Bristol’ now as all the homes have been bought by people from Bristol as it’s cheaper and because the bridge tolls have gone.”

Mum Tessa Davies, 38, who was walking her two-year-old son with her eight-month-old strapped to her, only learned the council event was taking place a day before and didn’t have the chance to attend.

She said: “I do understand why they are doing it as people need housing, and are crying out for affordable housing as it probably harder to get on the property ladder now than it was for us.”

But she admits new houses could mean “it really won’t feel like a village” and, as a mum, wonders what expansion, and the burgeoning population of Sudbrook, will mean for school places. Though it is a local talking point she isn’t aware if there is really a pressure: “It’s a very good school and already has two classes a year.”

While what the future holds for the village remains to be decided, Monmouthshire County Council is urging people to have their say via the consultation on its county wide development plan that runs until the end of January.

The deadline for submitting comments on the plan is midnight on Monday, January 30 and they can be sent to [email protected] or posted to Planning Policy, Monmouthshire County Council, County Hall, The Rhadyr, Usk, NP15 1GA. People are encouraged to comment via email.