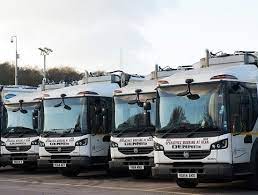 A DECISION is set to be made on whether black bags and bins will be collected every three weeks instead of every two in Rhondda Cynon Taf.

The estimated financial saving from the proposals is around £800,000 for a full year.

Consultation feedback
In a consultation, people were asked if they would support a change in black bag/wheelie bin collection frequency if it safeguarded
other key services.

The report said that the 4087 responses received to this question were fairly balanced, with a slight majority of respondents supporting the proposed change, if it safeguarded other key services (50.4%), the report said.

People were also asked if they would support a change to a reusable recycling sack and if the household would be able to store and use
reusable sacks, and of the 4097 responses to this, the majority (62.2%), were supportive of such a change.

The main concerns that were raised were over existing wheelie bins not being sufficient in size to store waste for up to three weeks, the potential for increased fly-tipping due to longer waits between collections, and concerns over possible increases in vermin due to the smell and hygiene issues if waste was left for three weeks.

There were also queries around the storage and disposal of hutch waste and cat litter, and the collection of clinical waste, and there was feedback that moving to three-weekly refuse collections represented a reduction in service, which should mean reduced council tax.

The council’s response to these concerns
In response, the council said in those areas with wheelie bin collections, larger 240 litre bins were sufficient to accommodate three black bags, but those households with standard 120 litre bins would be permitted one bag of side waste, no larger than 70 litres.

It also said that the majority of waste would continue to be collected at current frequencies so the storing of black bags would be minimal as most household waste was collected weekly, and it added that the council operated six community recycling centre sites which were open seven days per week, together with three re-use shops.

In response to the issue of fly-tipping, the council said that whilst the potential for fly-tipping existed, there was no increase in fly-tipping when the council moved from weekly to fortnightly refuse collections in 2013 and when side waste restrictions were introduced in 2018.

It also said neighbouring councils which had adopted three-weekly collections had not reported any linked increases in fly-tipping and any would-be fly-tippers would be subject to enforcement action and prosecution.

The council said that, although concerns around vermin and hygiene issues were noted, it should be emphasised that pests such as rats and maggots fed on food waste, which was collected separately every week.

It said food waste should not be placed in black bags and presented for refuse collections and that kitchen roll containing leftover food, fat and oil, for example, could also be put in food waste, as well as small amounts of food cardboard packaging such as pizza boxes, chip paper and cream cake boxes.

“Therefore, there is no reason why food waste should be placed in black bags and thus no reason for an increase in vermin and associated pests,” the report said.

The council said cat litter and hutch waste (from the likes of hamsters and guinea pigs), should still be placed in black bags but arrangements would also be made for such waste to be able to be disposed of, on a limited and controlled basis, at the council’s community recycling centres (CRCs).

Subject to scrutinising residents’ existing waste needs and recycling habits, the council said it also offered an additional bag allowance option for residents who were struggling with the waste allowances such as those residents who produced a lot of daily waste that could not be recycled, and this process was currently under review, the council said.

On clinical waste, the council said it did not collect such waste, which came under the responsibility of the NHS, but stoma bags could be disposed of in black bags and it was recommended that the bag was emptied and rinsed, or emptied and placed into another sealed bag or bags.

The report said that the vast majority of household waste would continue to be collected weekly and so there was no reduction in service which would warrant equating with council tax rates.

It also said waste services also had to deal with a range of cost increases such as fuel and parts for vehicles and wider supply chain costs.

The benefits of the changes
The council report said that moving to three-weekly collections, was crucial if the council was going to achieve the Welsh Government recycling target of 70% by 2025 and move towards the RCT 80% target. Recent analysis of the council’s recycling rate showed that it was currently at 67.48%.

The report also said that investigation and analysis undertaken by the waste services section suggested that an increase in the council’s recycling rate could be achieved by adopting a new approach to collections of residual household waste.

In moving toward three-weekly collections, with a strict volume control of a maximum of three black bags, (or no side waste for households with large wheelie bin collections), then there was potential to achieve the twin benefits of a reduction in general waste, as well as financial savings, the report said.

It said: “Whilst there is less evidence that extending to three, or indeed four-weekly waste collections in isolation has a strong influence on recycling rates, it is clear that they do offer the potential for financial savings.

It added that organic waste also had a high carbon footprint and as nearly 39% of the black bag waste sampled as part of the council’s investigations was organic waste, the proposed change in policy would have “positive implications” towards the council’s net zero climate change commitments.

The report said: “Increasing engagement with residents to maximise their rates of recycling will be imperative to improving the council’s recycling performance and avoiding potential fines for missing Welsh Government recycling targets of 70% recycling for 2024/25.

“Recycling rates will be monitored and evaluated to inform the ongoing strategy for waste and recycling collections across RCTCBC as we strive to achieve the council’s recycling target of 80% by 2025 as part of our commitment to the Tackling Climate Change Strategy.”

The report said that since the original proposals were presented to cabinet, several councils had confirmed that they were currently exploring options to reduce the frequency of black bin/bag waste collections, in order to reduce costs in light of continued exceptional budget pressures and in order to meet the Welsh Government 70% recycling targets for 2024/25 and avoid the risk of fines.