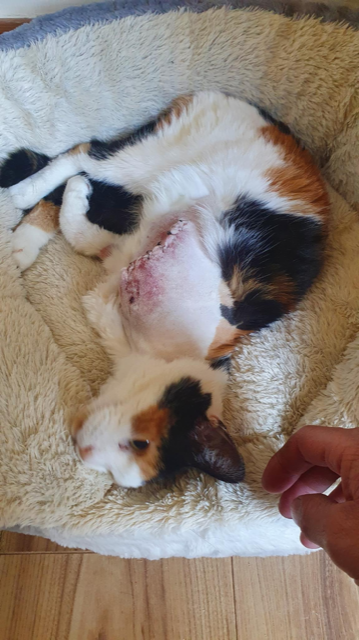 THE RSPCA is appealing for information after a tortoiseshell cat died from heart failure three days after being shot.

The incident happened in April in the Cefn Glas area of Bridgend.

The cat, named Sasha, is 16-years-old and was found by her owner Andrea Painter at the bottom of her driveway on Longfellow Drive hiding behind a plant pot on the morning of Friday 23 April; with her last seen before then at approximately 7.45pm the previous evening.

The cat was having great difficulty moving, had a nasty leg wound and blood all over her back. Sadly, vets found a bullet from an air weapon in Sasha’s leg.

Vets amputated the leg in surgery – but tragically, following the trauma of the shooting, Sasha died three days later of heart failure.

An appeal to the local community has now been launched to come forward with any detail about this sad incident. Anyone who may know who shot Sasha in the Cefn Glas area of Bridgend on 22 or 23 April has been urged to contact the RSPCA immediately.

Vets also discovered another pellet in a different leg that was old and healed, indicating that the cat had been shot in the past too.

Deliberately using an air gun to injure an animal could constitute an offence – with those responsible currently liable to face up to six months in prison and an unlimited fine.

The RSPCA continues to support greater regulation around the use of air weapons – including better education, stricter controls on use and an explanation of the law to anyone buying one.

RSPCA inspector Sophie Daniels said: “We’re so sorry to hear what has happened to Sasha. It’s tragic to think of what she went through, and the likelihood that the trauma led to her heart failure a few days later.

“It’s been such a tough time for us all through this pandemic. As communities have rallied around each other, it’s so depressing to think someone in Cefn Glas in Bridgend has been spending their time taking shots at an innocent cat. We’re also alarmed to hear Sasha had an old pellet in another keg, suggesting this has happened before.

“We’re really eager to find out what happened here – so anyone with information about this incident on 22 or 23 April should contact our inspectorate appeal line on 0300 123 8018. Sasha’s owners had last seen her at 7.45pm on the Thursday evening when she went out and didn’t return home. She was found at 7.30am the next morning.

“Sadly, we do often deal with animals targeted by air weapons. That’s why we continue to support better education and a thorough explanation of the law for users.”

Andrea Painter, Sasha’s owner, added: “It’s been such a tough time. I found Sasha at the bottom of my drive-way, and there was clearly a problem with her leg. She had a nasty wound, and blood all over her back.

“We took her to the vets and sadly they found a bullet – which they were able to give to me for any investigations taking place. While vets were able to operate, she died of heart failure three days later which they think is due to the trauma.

“She was 16-years-old but a very fit and well cat. We just can’t believe this has happened.”