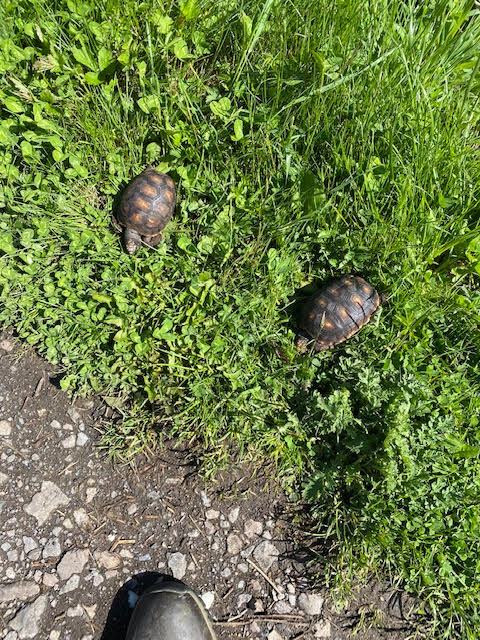 AN appeal for information has been launched by the RSPCA after five dead tortoises were found at an allotment in Barry in “unexplained” circumstances.

RSPCA Cymru was contacted after a member of the public found the five animals at the Cemetery Road allotment in the Vale of Glamorgan town on Monday (24 May).

They had taken them to the International Tortoise Association (I.T.A) in Sully, who promptly sounded the alarm to both the Police and the RSPCA.

All five are red-foot tortoises, and all were young; aged between two and ten. It is believed all five died at similar times.

Red-foot tortoises come from Central and South America, and can grow to more than 30cm, or 12 inches, in length as adults. They can live for around 50 years.

Ann Ovenstone MBE, who chairs the I.T.A, said the “oddness and unexplained nature” of the discovery has given her a very “uncomfortable feeling”.

She said: “These red-foot tortoises were found dead, very near to one another – up to around one metre apart. Five tortoises don’t just gather together and die – something very troubling has likely happened here.

“The oddness and unexplained nature of this has made me very alarmed – and we of course contacted the RSPCA and the Police straight away once the tortoises were brought into us by the member of the public who found them.

“You don’t see red-foot tortoises very often, and I don’t know anyone locally who breeds them. The incident has given me a very uncomfortable feeling, and I urge anyone in the local community with information to respond to the RSPCA’s appeal.”

RSPCA inspector Simon Evans added: “Something clearly isn’t right here; with these five tortoises found dead very near to one another at this allotment.

“This was a really sad and shocking discovery for the gentleman at the allotments to make, and the RSPCA is now making urgent enquiries to try and find out what happened to these animals.

“Anyone with information about how these tortoises ended up dead in the Cemetery Road allotments in Barry is urged to contact our inspectorate appeal line on 0300 123 8018.”