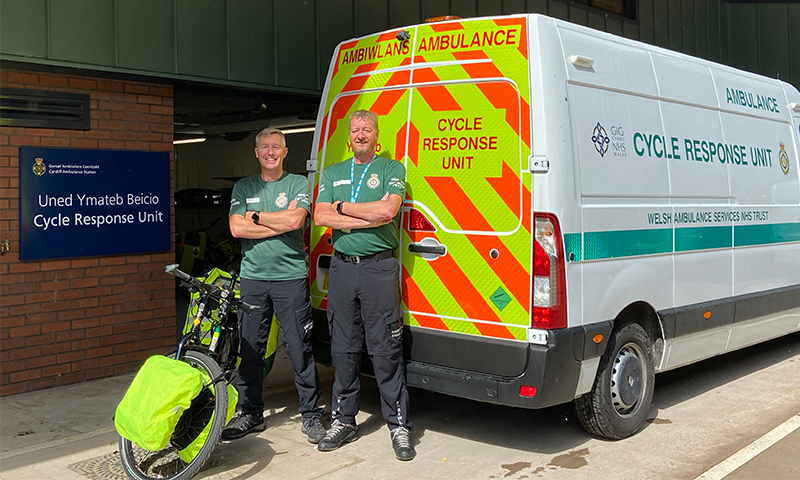 The charity provides, a communications and social hub for veterans, emergency services, reservists and their families.

Emergency Medical Technicians Andrew Harris and Craig Baxter, who are part of the Trust’s Cycle Response Unit based at Cardiff Ambulance Station, will be joining the 300 mile cycle, starting tomorrow.

The pair will be providing medical cover and cycle repair for the twelve participating riders, who will be traveling from Cardiff to Frome to Portsmouth and into Paris.

On days three and four, they will cycle through the French towns of Caen, Le Neubourg and Magnanville, hoping to end in Paris on day five.

“I’ve had help from them in the past, so I wanted to give something back.

“The Trust have also been great in terms of supporting us for this journey.”

It will be no easy feat, with their bikes weighing five and a half stone.

Craig said: “We will be taking it in turns cycling behind the riders.

“It will be hard, but worth it as Woody’s Lodge helps everyone across the board, they bring a lot to the table in terms of support.”

Both Andrew and Craig are experienced cyclists, working many Fridays and Saturdays for the Trust’s Cycle Response Unit.

Andrew said: “We are proud of the Cycle Response Unit, which currently provides care to those around Cardiff, particularly on the busiest days, in crowded areas where emergency ambulances can’t get through.”

Craig added: “We also travel to other events within Wales, like the Elvis festival in Porthcawl and work with partner agencies, some across the border.”

Starting on Tuesday 05 July and hoping to finish on Sunday 10 July, both Andrew and Craig will start the journey.

Ian Price, Emergency Medical Technician for the Trust and a trustee of Woody’s Lodge, said “I am really proud of Andrew and Craig supporting this fundraising effort.

“I want to thank Jason Killens, our Chief Executive of the Trust for allowing the two members of staff to participate with a Cycle Response Vehicle and bikes.

“Woody’s Lodge is pan Wales, and I would recommend them to any member of staff who needs help.”

Sian Woodland, Co-Founder and Deputy CEO of Woody’s Lodge said “We are so proud to have organised our inaugural cycle ride this year and are looking forward to so many more.

“Our cyclists are a mix of veterans, serving soldiers and people who support our charity.

“Woody’s Lodge is more than just a charity to me, it’s a legacy, so I want to thank WAST for their continued support, and for keeping our cyclists safe.”

You can sponsor the duo and the rest of the team via the Woody’s Lodge JustGiving page here.