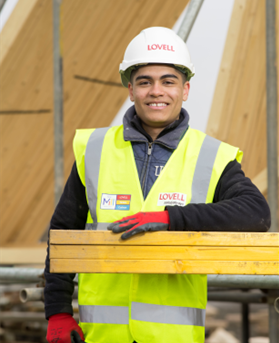 OTIS found out about the apprentice role at Lovell through The Prince’s Trust, a charity which helps young people get into jobs, education and training, and a local Construction Skills Certification Scheme (CSCS) programme sponsored by Lovell.

During his apprenticeship, Otis studied at Cardiff and Vale College one day a week and spent four days on site, where he worked with subcontractors to learn all methods of carpentry, from timber frame erection and roofing, to adding the final touches.

At the end of his course, Otis completed his level three advanced carpentry, which saw him work at a supervisory level.

Otis said: “I have always thrived off learning new things and developing my knowledge, so I really enjoyed my apprenticeship with Lovell. I was thoroughly supported throughout my whole course, and was given progress meetings and independent tasks to further push my skill set.”

By the end of his apprenticeship, Otis was given extra duties that a site manager would typically undergo, giving him a taster of what to expect in his new role.

Otis added: “My favourite thing about my new role is building and growing the local community, which I am very fond of as someone who has always lived in Cardiff. I love being involved in the building of such great homes, and liaising with colleagues and subcontractors.

“Lovell is like one big family, it’s a great company. I’d recommend working for Lovell, especially in a developmental role, and I’m looking forward to further progressing my career.”

James Duffett, regional managing director at Lovell, said: “We are very proud that Otis has progressed so well within Lovell. He’s proved himself to be very hard-working and determined on further developing his skill set, and we’re delighted to have him as part of our team at The Mill.

“We’re always thrilled to be able to provide local people with apprenticeships and training, helping them to enter the construction industry and thrive within their roles. It’s important to us at Lovell to invest in developing raw talent, and we value the importance of having a team of diverse and talented individuals.

“It’s been a pleasure to see Otis flourish within the industry, and we look forward to supporting him as his career continues to evolve.”

Outside of work, Otis enjoys sports, playing football and travelling.

To find out more about careers at Lovell, visit https://corporate.lovell.co.uk/careers/.

The Mill includes 358 homes for open market sale by Lovell, which have now sold out, and 442 homes for rent – which will be managed by Cadwyn Housing Association – for Tirion Homes. The scheme is going ahead with the support of the Welsh Government and financial backing from the Principality Building Society, and is being developed by Tirion Homes in partnership with Lovell. For more details, visit https://www.tirionhomes.co.uk/the-mill/.

For further information on Lovell and the homes available, please visit https://www.lovell.co.uk.